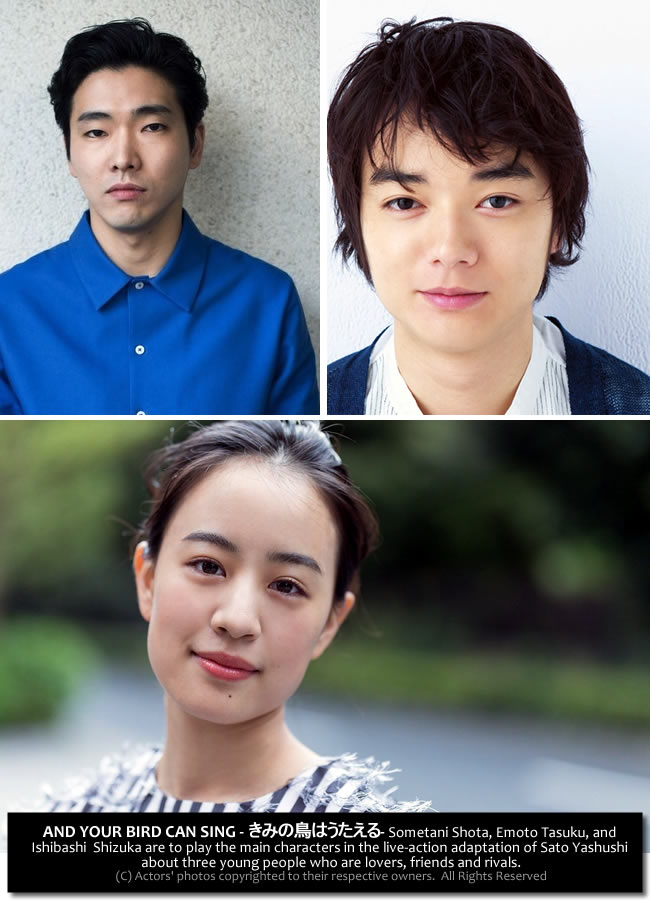 From author Sato Yashushi who gave us The Light Shines Only There, Over the Fence, and Sketches of Kaitan City comes the latest live-action adaptation of another of his work entitled “And Your Bird Can Sing”. Described as the author’s “true debut into the literary world, (which) was nominated for the 86th Akutagawa Prize”, it is about the “triangular relationship between three 21-year-olds”.

Shortlisted for the prestigious Akutagawa Prize when it was first published, this work has returned to the limelight nearly 20 years after author Yasushi Satō’s death and is now slated to be made into a feature film for release in 2018. The triangular relationship between three 21-year-olds—the unnamed narrator, his male roommate Shizuo, and a woman named Sachiko who works at the same bookstore as the narrator—is reminiscent of François Truffaut’s Jules et Jim (1962). The narrator and Shizuo first met when they were both working in the cold storage warehouse of an ice-cream company. They became roommates at the narrator’s suggestion. The narrator has subsequently switched to a job in a bookstore, and Shizuo is now unemployed. Ignoring the fact that Sachiko seems to be involved with the store manager, the narrator seeks out her company and in due course they become intimate. That summer, the proprietor of a bar the narrator frequents goes on a trip with Shizuo and Sachiko, but the narrator stays behind. When they return, Sachiko tells him that she is going to move in with Shizuo. [read more]

While the book description mentions the romantic angle involving the three main characters, it remains to be seen if the same incident involving Sometani’s character – Shizuo – will remain intact. The said incident involves the young man and his mother who is suffering from dementia and the crime that follows.

Books from Japan in describing the author also said:

(the author’s) cool, almost hardboiled, writing style and the universal appeal of his stories about young people struggling to gain purchase on life seem to have struck a chord with today’s younger generation. [source]

I just reviewed the live-action adaptation of Over The Fence, one of the author’s work and it’s shot in the author’s birthplace, Hakodate, which will also be the setting for And Your Bird Can Sing.

The author has created some memorable characters in his books – Ikawaki Chizuru’s Chinatsu, Suda Masaki’s Takuji and Ayano Go’s Tatsuo in Mipo Oh’s The Light Shines Only There are all dark, complicated characters, while Aoi Yu’s Satoshi in Over The Fence is irritating, yet equally captivating and tragic as well.

While Emoto’s character – Boku – also serves as the narrator, it’s Sometani’s Shizuo who elicits the most attention. These are not your typical manga to LA characters. Sometani and Emoto have proven many times the degree of competence of their performances. It leaves me in no doubt they can do justice to such roles.