A timid, yet aspiring brass band member (Tsuchiya Tao) and an ambitious baseball player (Takeuchi Ryoma) take center stage in Aozora Yell (青空エール), a tale of young romance, ambition, and dreams. A lot has been said about the acting competence of the petite and alluring Miss Tsuchiya but in this case, her presence as the fumbling often mistreated and underestimated trumpet player is spot on. At 155 cm, her co-star Takeuchi (185 cm) towers above her, which makes their romantic team-up all the more unexpected.

The two protagonist first met while admiring the trophies won by the school’s baseball team, Shirato. Yamada Daisuke (Takeuchi) is proud of his ambition to become an excellent baseball player. It’s quite apparent that he wants to be the team’s next captain. Ono Tsubasa (Tsuchiya), on the other hand, feels modest of her chances to join the band. But seeing how Daisuke’s eyes shine brightly upon her, she made her resolve to fight for a spot. No one has looked at her with such undisguised sense of camaraderie and affection. She will not let him down.

As to be expected, Tsubasa struggles to meet the demands of the band’s conductor – the strict and highly-strung Sugimura Yoko (Ueno Juri), as well as, the majority of the band members. But she has a special quality about her – she refuses to bow down to pressure and rejection. Her tenacity to rise above her own perceived mediocrity is admirable. She may appear to be as ‘meek as a lamb’ but she’s a tiger underneath her delicate exterior. A senpai (Shida Mirai) was helpful in her training, but one of the band’s leaders Mizushima Aki (Hayama Shono) disapproves of her and regards Ono as an inferior player.

Daisuke breezes through a much-coveted place in the team. His bright, cheerful personality magnifies his already touted prowess in the field. Usui Kota (Yamada Yuki) mentors the young man who will soon take over the reins of the team.

Will romance blooms? Not yet. With some unexpected turn of events, both Daisuke and Tsubasa must let go of their feelings for now in pursuit of their dreams. 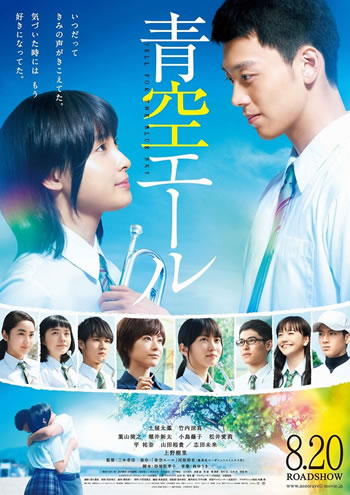 Never have I felt so much connection with fictional characters as I did with Ono and Yamada. It must have been their on-screen chemistry that made me felt such authenticity and honesty. Certain scenes tug at the heart – placing ema (wishes) at the temple, hugging with so much affection during Daisuke’s injury, Ono cheering her captain during the final match.

While many live-action adaptations fail at developing characters, in Aozora Yell, it not only succeeded in putting enough spotlight to the main personalities but also gave secondary players enough room to shine. Hayama Shono, Shida Mirai, and a personal bias actor Horii Arata (who plays Kido, the team’s pitcher) made the most of their limited but effective screen time.

Aside from the excellent acting overall, the movie is particular of the timeline, giving viewers enough time to absorb the growth in the characters – some leave the school to become young professionals (Shida Mirai), while freshmen are promoted to take the lead, as it should be in real life. Even Ueno Juri was able to explore her character as the underestimated band conductor, dismissing her senior and male chauvinist peer in a flash of anger, and a curt remark.

Much of the credit to the movie’s success goes to Miki Takahiro, the director – who did Control Tower, Solanin, We Were There, and Blue Spring Ride. It’s not an easy feat to condense a manga series that spans from 2008 to 2015. But Miki ably selected the scenes and situations that matter the most.

Aozora Yell – in my honest opinion – is one of the better LA released for 2017. I regard it with the same affection as I had for Orange (which incidentally has Tsuchiya with Yamazaki Kento as her romantic interest), Wolf Girl and Black Prince and another of Miki’s work, the angst-filled and emotionally charged Control Tower.