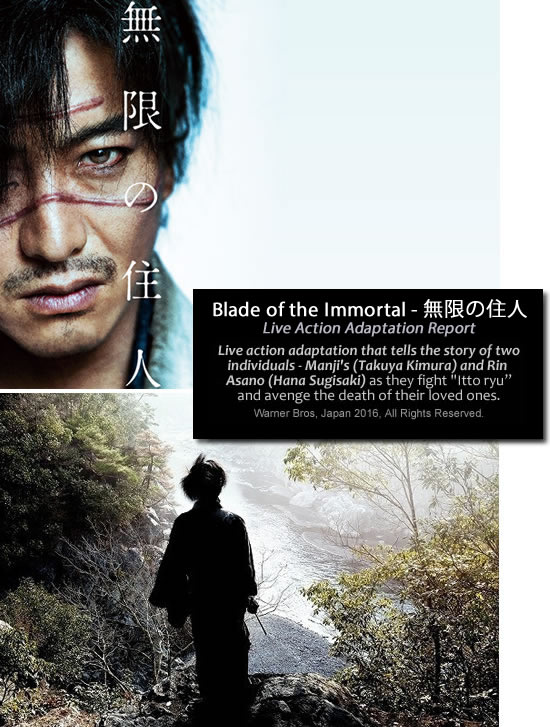 Johnny’s perennial idol and superstar Takuya Kimura will be collaborating with Takashi Miike for the first time in the live-action, The Blade of the Immortal. Based on the manga series “Mugen no Junin” by Hiroaki Samura, the movie is about revenge and immortality.

A lot has been said about Takashi Miike state of filmmaking recently. While his previous projects – Thirteen Samurai, Harakiri: Death of a Samurai and Ace Attorney were appreciated by both fans and critics, his more recent films were not. He has been doing movies since 1991, and it seems he’s getting tired? Or it has something to do with the creative juices running out?

But this new movie with famous idol Kimutaku – who made a remarkable performance in Yoji Yamada’s Love and Honor – maybe the right project to reclaim his reputation as the Japanese film industry’s enfant terrible.

Blade of the Immortal follows the deeds of Manji, a skilled samurai who has a decisive advantage: no wound can kill him, except for a rare poison. In the past, his criminal actions led to the death of 100 other samurais (including his sister’s husband). He becomes immortal at the hand of an 800-year-old nun named Yaobikuni and is compelled by the death of his sister to accept the quest that will end his agelessness. He has vowed to make amends by killing 1000 evil men, and until he does Manji will be kept alive by “sacred bloodworms” (血仙蟲 kessen-chū?), remarkable creatures that allow him to survive nearly any injury and reattach severed limbs even after hours of separation. They work by sacrificing themselves to seal the wound – they’re worms that were bred to be as close in their chemical and physical make-up to humans as you can get without being human. They cannot handle regrowth on a large scale, but, for example, can reattach a severed limb or seal a hole in the brain. Manji crosses paths with a young girl named Asano Rin and promises to help her avenge her parents, who were killed by a cadre of master swordsmen led by Anotsu Kagehisa. Anotsu killed Rin’s father and his entire dōjō, making them a family of outcasts. Anotsu’s quest is to gather other outcasts and form an incredibly powerful new dojo, the Ittō-ryū (a school teaching any technique that wins, no matter how exotic or underhanded), and has started taking over and destroying other dojos. [ Wiki ] 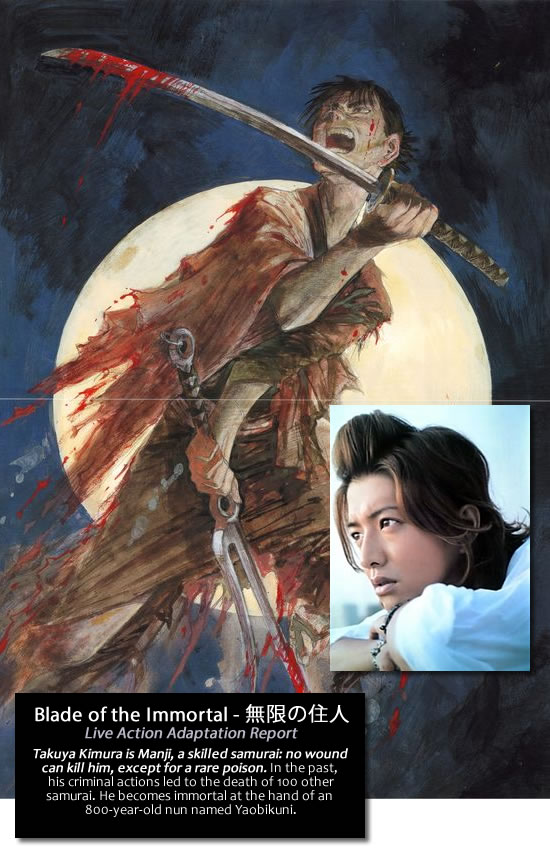 While Miike’s Visitor Q is shocking for its bizarre storyline and disturbing, sexually twisted scenes, his 2001 movie adaptation of the manga Ichi the Killer was so gory that audiences at the Toronto International Film Festival received promotional barf bags to accompany the film. More recently, his installment in the Masters of Horror television series was deemed so disturbing it was removed from the broadcast lineup. Miike personally selected Kimutaku to star as Manji so it will be interesting to see what type of live-action film springs forth from the unlikely partnership. [ source ]

The short teaser above (first video) looks incredible. I hope that Miike is back in form and that his collaboration with Kimura may break his ‘mediocre’ spell.

Also much is to be expected from Hana Sugisaki. The young hopeful made waves in Pieta on the Toilet and will be seen next with Rie Miyazawa and Joe Odagiri in Her Love Boils Bathwater (湯を沸かすほどの熱い愛). This new film will serve as Sugisaki’s launching pad for more acclaim and possibly better roles in the future.

Actors' Bias Beyond the Frame Cross Talk Drama Features Food for Thought Generation NEXT Hitlist Indies LA Movie News Roundup Next Break Novel On the Way Platform Reviews Thoughts and Things TV & Film Youngbloods
Privacy & Cookies: This site uses cookies. By continuing to use this website, you agree to their use.
To find out more, including how to control cookies, see here: Cookie Policy
wpDiscuz
0
0
Would love your thoughts, please comment.x
()
x
| Reply
Go to mobile version
Loading Comments...