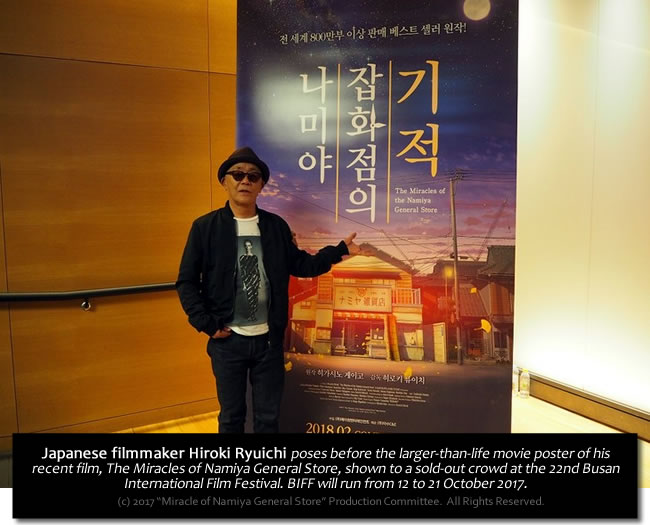 Based on the novel “Namiya Zakkaten no Kiseki” by Higashino Keigo, Namiya tackles the mysterious connection between people from the past and the present. Their medium: the personal and time-tested handwritten letters. Dropped via the store’s mailbox and written 30 or so years ago, people seek advice on life, love, and careers from the store’s owner.

Director Hiroki boasts that Higashino’s novel has sold 800,000 copies in South Korea alone during the interview right after the movie was shown to a sold-out crowd.

Famous for such films as April Bride, The Lightning Tree, Wolf Girl and Black Prince, and P to JK, Hiroki tells the audience that Namiya resonates with people because of words. That ‘words’ are important and connect human beings for expressing profound and sentimental feelings.

The Singapore-based reviewer Marcus Goh says the movie sets a new bar for Japanese drama and that:

One of the major themes in the film is the interconnectedness of humanity, and how every person’s life has value and purpose. However, it doesn’t go so far as to have the characters spell it out for you. Rather, it gently leads you into that conclusion, leaving you hopeful about human nature. “Miracles” also illustrates the importance of kindness and understanding, and this positive commentary on the human condition is a heartwarming message to have. [read more]

There’s a lot of misty-eyed nostalgia in “Namiya,” especially for the way things were in 1980 when the country wasn’t yet spoiled by wealth and things were more relaxed. Even in Tokyo, there were hardly any convenience stores and housewives routinely shopped at neighborhood establishments like Namiya General. The Japanese have a soft spot for such cozy mom-and-pop stores, sentō (public baths) and family-run shokudō (diners) — all of which have been replaced by 24-hour convenience stores and Saizeriya franchises. As for letter-writing, we all know what happened to that little ritual. [read more]

Namiya stars Yamada Ryosuke as one of the three delinquent boys who enter the store after many years and ‘resumes’ answering the letters. Nishida Toshiyuki plays Namiya, the store owner while Murakami Nijiro and Kanichiro play the other two delinquents.

The movie is part of Busan’s A Window on Asian Cinema section. [click here to view details @BIFF]

Celebrated Japanese Filmmaker Yukisada Isao is not new to Busan or to any international film festivals for that matter. His previous works such as Crying Out Love, In the Center of the World, Go!, Parade, Five Minutes to Tomorrow, and Pink and Gray have been exhibited in various festivals and won accolades for the director and his stars.

Narratage, one of his latest films, is getting plenty of buzzes. BIFF program described the film as:

The latest work by Yukisada Isao, who is establishing his own refined sub-genre, crafting films about love rendered with an exquisite and subtle sensitivity. He narrates the scenes of a heartbreaking love story, weaving it together like the threads of a delicate fabric. The director, who spent ten years preparing this film adaptation of the original novel, uses emotionally charged images to depict the longing, jealousy, and frustration of love. [source]

The movie is based on a novel written by Shimamoto Rio about the forbidden love between a teacher, Hayama (played on the LA by Matsumoto Jun) and his student, Izumi (Arimura Kasumi on the big screen).  The title ‘Narratage’ connotes the use of a narrator that tells the story in a recollection of events.

Joining Matsumoto and Arimura is Sakaguchi Kentaro who plays the heroine’s boyfriend.

Memory has a way of distorting time, stretching it or compressing it according to our emotional response to the events at hand. That subjective temporal elasticity is captured in “Narratage,” a trembling, intricately structured first-love story from well-regarded Japanese helmer Isao Yukisada — though at 140 minutes, this delicate tale risks letting the viewer’s own mind wander off at its own pace. When it does hold our attention, that’s largely thanks to its young star Kasumi Arimura, sweetly affecting as a sensitive teen held in limbo by an enduring love for her kindly high school teacher. Gliding past the less palatable aspects of the student-master relationship at its core, Yukisada’s film instead places both lovers on an equal plane of heartsore vulnerability, with alternately tender and maudlin results. Adapted from a Japanese bestseller, “Narratage” should perform well at home, but its softness makes for a harder sell internationally. [read more]

While I’m not a fan of Arimura, I find that her acting is the subject of many discussions of late. If critics are praising her, then that’s good news. I also tend to believe that after Flying Colors (where she was nominated for Best Actress at the Japan Academy prize), this movie may be her next biggest role to date.

Narratage has a gala opening at Busan. [click here to view details @BIFF]