This is Part 2 of our Live Action Buzz featuring Chihayafuru. [ Part 1 talks about the three major characters – Chihaya, Taishi and Arata and the live action cast ]

Another interesting character of Chihayafuru is the traditional, yet fiery and strict Kanade Oe.

Kanade often has her short brown hair in two neat and low pig tails. Her bangs are separated, half at the right of her face and a half at the left, exposing her wide forehead. She has round brown eyes, single eyelids and only three eyelashes on each eye. She usually wears her uniform which consists of a tucked in white shirt with a bow, a green and red plaid mini-skirt, black knee-socks and brown loafers. Sometimes she wears a t-shirt with the Oe Traditional Clothing Shop logo. Kanade gets her looks from her mother. Oe is a female high school student who loves traditional Japanese culture. Kanade has shown a great love for Japanese poems and traditional clothing. She is in the karuta club that Chihaya and Taichi created and is the third member to join after being persuaded by Chihaya. [ source ]

Kamishiraishi is the lead star/heroine of the movie Lady Maiko. Kamishiraishi is among 800 applicants who took part in auditions over a six month period and it was one of the best performances from a newcomer (the other being Ryoko Fujino in Solomon’s Perjury). The lead role required her to wear traditional Japanese kimono, which is what she will do in Chihayafuru. What’s interesting, aside from wearing traditional Japanese clothes, is her reciting some of the poems from the Karuta tournament and explaining the history of the poems.

Says Variety about her performance:

Doe-eyed 16-year-old Kamishiraishi scouted from the “Toho Cinderella Contest,” easily conveys a rookie’s eagerness when learning the ropes; her maiko debut is a transformation as magical as Cinderella’s. [ read more ] 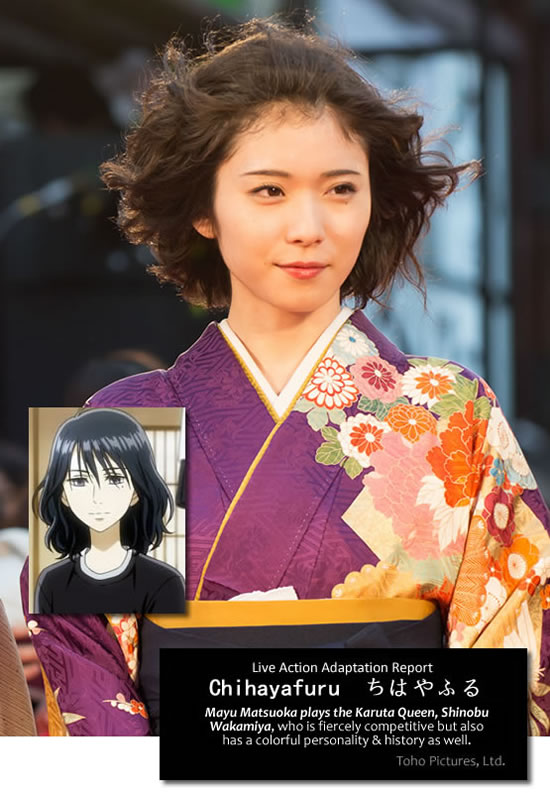 Mayu Matsuoka is one of my favorite up and coming Japanese actresses. I think her commanding voice is a great quality of her, plus the ability to play dramatic and intense scenes are her forte. Playing a supporting role for someone like her (just like Fumi Nikaido or Hikari Mitsushima) is not a big issue since she can play any role/character and get away with it.

With just a change in facial expression, Matsuoka can be “fierce” or “sweet” or whatever expression she wanted to appear. She is playing the current Karuta Queen, Shinobu:

Shinobu has blue eyes and a dark blue wavy, messy hair. On her left eye, she has a beauty mark. She also looks beautifully slim, with full eyes that are accentuated by their upturned corners. Her characteristics are fox-like as she carefully exudes a calm exterior as she plays her “silent karuta” but has almost volatile, contradictory emotions inside. Her face, whether chubby or slim, is shown to have a very sharp defined quality meaning that she is a person who is more prone to speak with their body language rather words. Her first appearance was in her uniform upon meeting Chihaya at the Omi Jingu. Later, she has been described as someone who is cute but having the fashion sense of a rock in episode 14. She appeared with her shirt tucked-in with the design of “Snowmaru” which no other character than Chihaya seems to know. She is shown to have grown fat in her match with Yumi Yamamoto. By the next Omi Jingu tournament the following year, she became slim again. Wakamiya is the current Karuta Queen. She is also the youngest Queen in karuta history. [ source ]

The Ogura Hundred Poets was completed during the Kamakura period. Fujiwara no Teika compiled them by taking one poem each from 100 of the best poets in chronological order from Emperor Tenji to the Retired Emperor Juntoku to decorate the sliding doors at the Ogura mountain villa, the summer home of the general and poet Utsunomiya Yoritsuna. Many of selected poems were ornamental in nature because they were meant to be used as decoration. Seventy-nine male poets! Twenty-one female poets! I am particularly attracted to the works of female poets! You can feel the seasons and modesty in way that can’t be found in modern poetry! – Kanade Ōe [ taken from Chihayafuru Wikia ]

If you want to further look into the poems individually, there is this amazing blog dedicated to it: 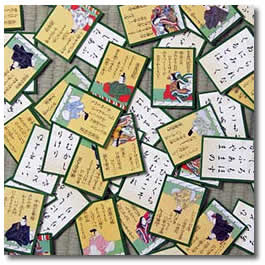 The Hyakunin Isshu (百人一首) is a poem anthology compiled in the 13th century by famed poet Fujiwara no Teika. After the exile of his liege lord, Emperor Gotoba, Teika eventually retired into the Buddhist monastic life, quietly researching literature and poetry of the past. However, at the request of his son’s father-in-law, Lord Utsunomiya no Yoritsuna, Teika compiled 100 poems in his own handwriting, so that they could be adorned on the silk screens of Lord Utsunomiya’s villa near Mount Ogura outside Kyoto. It was these 100 selected poems that eventually became the collection that we know today as the Ogura Hyakunin Isshu (小倉百人一首), to distinguish it from other “100 poets” collections that were popular at the time.

The anthology features 100 famous waka (和歌) or Japanese-style poems, as opposed to kanshi (漢詩) or Chinese-style poems that were also popular during that period. Haiku as we know them didn’t exist until centuries later during the medieval “samurai” period.

Within Japanese poetry, these are specifically tanka (短歌) poems in 5-7-5-7-7 syllable form, and were a popular style of poetry at that time, but even today the Waka style poem remains popular in some literary circles including the Imperial Family.

In Japan, the Hyakunin Isshu continues to be one of the most beloved anthologies in Japanese culture because it spans poems from Japan’s early Golden Age, the Nara and Heian Periods, and includes some very memorable poems. Children in schools often study the Hyakunin Isshu even today and games have been made around it particularly for New Year’s.

Here’s a sampling from the same author who wrote a blog dedicated to the poems:

While the raindrops of
the passing shower have not yet dried from
near the leaves of the evergreens,
the mist is already rising, on
this evening in autumn.

In Part 3, we explore the complex relationships between Chihaya, Arata, and Taishi.