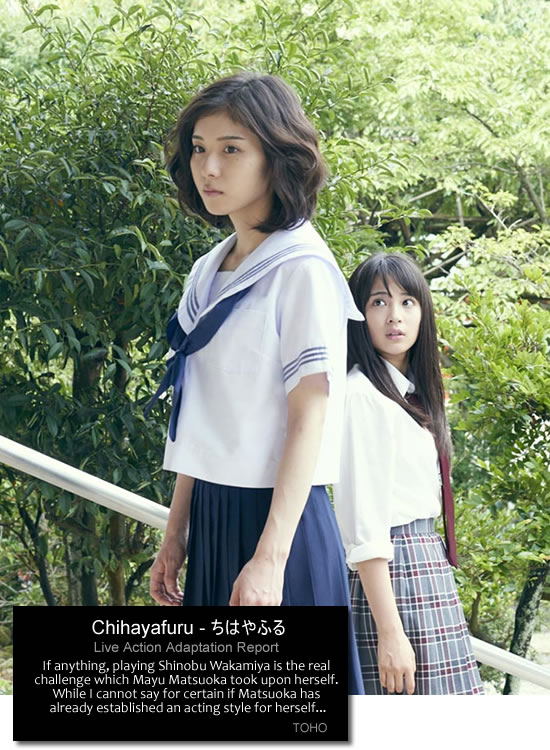 If you’ve watched both live-action Chihayafuru movies, then you know there is another film (or two) coming up. I mean, there’s so much still to be told! But before I get ahead of myself, let’s have a review.

Chihayafuru Kami no Ku (Part 1) – is the First installment of the live action based on the manga series written and illustrated by Yuki Suetsugu. It is about a school girl, Chihaya Ayase, who is inspired by a new classmate – Arata – to take up Hyakunin Isshu karuta competitively. Joining Chihaya is her long-time friend Taishi, and together with Arata, they formed a bond of deep friendship strengthened by the passion for the sport.

Chihayafuru Shimo no Ku (Part 2) – is the Second installment of the live action featuring the struggles of Chihaya and her friends to play competitive karuta. It also involves their personal issues about love, friendship, family, death and loss, loyalty and rivalry. The movie also introduced another major character – the current karuta queen and Chihaya’s thrilling encounter with the queen as they play karuta rivals.

There were some issues raised about the casting of Suzu Hirose playing the main character. Most of the argument is all about Hirose’s lack of “personal vibes” to play a credible Chihaya since the character is a  ” tomboyish, outgoing and ambitious” girl and that Hirose may not be able to project herself like that. However, for me, I think Suzu rose to the occasion and played a credible Chihaya. The character is not difficult to play.

If anything, playing Shinobu Wakamiya is the real challenge which Mayu Matsuoka took upon herself. While I cannot say for certain if Matsuoka has already established an acting style for herself, I know she has what it takes to step up her acting to the next level. Her commanding voice can be malicious, aggressive or tender as she likes it. Her facial expressions can show a full range of emotions and her encounters with Arata are some of the highlights of the second movie. Oh, and yes, how she gushed when she saw Chihaya’s Daddy Bear shirt and towel is just priceless!

While the manga is about the thrilling rivalries and competition involving the sport, it is also about young romantic love. The rivalry between Arata and Taishi is as intense and as personal as that of Chihaya and Shinobu – which brings me to Mackenyu and Shuhei Nomura.

Acting and performing are in the blood of Mackenyu, as he belongs to Japan’s acting royalty. His father is Sonny Chiba, one of Japan’s most prominent actors. As Arata, I find his performance to be both emotional and stirring. He has plenty of acting highlights in the second movie, and he exploited them to the fullest. His rivalry with Taishi (played effortlessly by Shuhei Nomura) is essential to move the story forward. Not to be out-act, Nomura has shown through his relatively young acting career that he is one of Japan’s most talented, and he continues to do so.

Part 1 of this report is all about the main characters (Chihaya, Taishi, and Arata), while Part 2 focuses on reigning Karuta queen and more characters. Part 3 is about the Arata-Taishi rivalry.

The first movie has already established the fact that Taishi is desperately in love with Chihaya and that the girl is completely oblivious to Taishi’s romantic feelings. People are already falling in love with Taishi to the detriment of Arata.

“How could Chihaya chose Arata when Taishi is with her all the time, especially during her most difficult times?” asked a Taishi fan.

I guess this is my biggest complaint about the two live-action adaptation. I commend how it highlighted the sport, but I think it failed to fully explore the romantic side of the story.

Well, I think the surprise announcement that there will be more movies to follow will answer my complaint, and hopefully, it will be a satisfying conclusion to a story that is truly Japanese but at the same time truly universal.