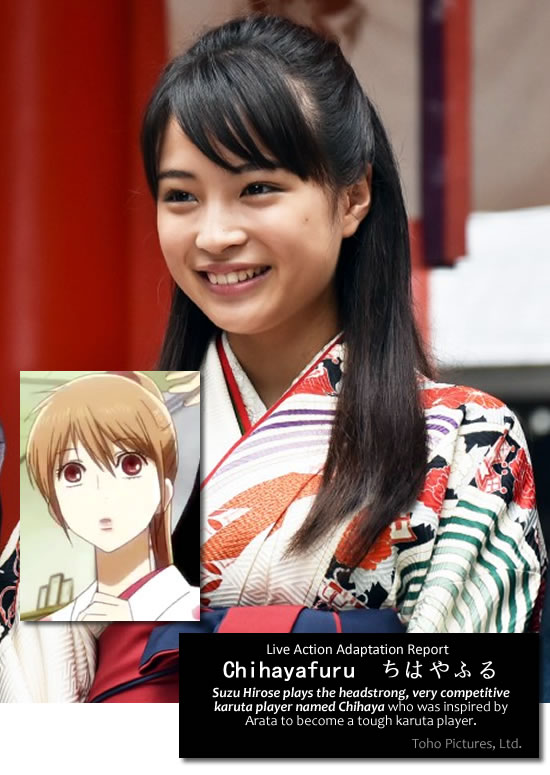 The first of three Chihayafuru movies has been released outside Japan –  it’s time for some discussion! This report is part one of a 4-part series featuring the live-action movies Chihayafuru.

My head is spinning as I glimpse at the list of live action adaptations coming up in the next few months or so… I know the manga to anime to movie adaptations/productions have been going on for years, but since we’re so much into the younger generation of Japanese actors and actresses, I just can’t help but feel excited and incapable of covering everything. Just like the more than dozens of J-doramas coming up every season, a reviewer/blogger has to make a choice – either cover just 1 or 2 or get overwhelmed with the pressure to post a review of everything.

I am not only fascinated with Chihayafuru (the anime version is beautiful and heartbreaking and just brilliant!) but also the Japanese sport of karuta which is just unique to me.

Also, the primary thing you always read on this blog – actor bias and their acting style. So the fundamental questions – Can Suzu Hirose play an excellent Chihaya Ayase? Is Shuhei Nomura bitten by the bug called “Second Lead Syndrome” and is suffering from such casting? Is Mackenyu gearing up for a reliable Arata Wataya and come up with some heartbreaking dramatic acting?

Let’s get some introduction on Karuta and the story of Chihayafuru first.

Chihayafuru (ちはやふる) is a manga series written and illustrated by Yuki Suetsugu, serialized in Be Love and published by Kodansha. It has been adapted into an anime television series, screening on Nippon Television from the 5th of October in 2011. It is about Chihaya Ayase, a girl who has spent most of her life simply supporting her sister in her model career. Things change when she meets a boy named Arata Wataya, a talented karuta player. He thinks that Chihaya has a potential to become a great player. As Chihaya takes on a new dream of becoming Japan’s best karuta player, she is soon separated from her karuta playing friends as they grow up. Now in high school, Chihaya still continues to play karuta in the hope that she will one day meet her friends again.  [ source ]

Karuta (かるた?, from Portuguese carta [“card”]) are Japanese playing cards. Playing cards were introduced to Japan by the Portuguese traders during the mid-16th century. These early decks were used for trick-taking games. Karuta packs are divided into two groups, those that are descended from Portuguese cards and those from Eawase. Eawase was originally played with oyster shells but were converted to card format during the early 17th-century. The basic idea of any Eawase karuta game is to be able to quickly determine which card out of an array of cards is required and then to grab the card before it is grabbed by an opponent. There are various types of cards which can be used to play karuta. It is also possible to play this game using two standard decks of playing cards.

By now, I’m already hooked watching the anime and is doing a marathon. I think that watching the anime gives me a certain level of authority to judge the casting, hence I could have posted this article way-way back, but I deemed it necessary to watch it myself and react based on certain assumptions.

Who is Chihaya Ayase?

Chihaya is a tall and slim teenage girl with long brown hair and brown eyes. She is considered beautiful and stunning. At school, she wears her uniform. When she isn’t at school, she wears fashionable hand-me-down clothes from her sister. She also wears Daddy Bear clothes, especially when she practices karuta. When she was 12 years old, she had short hair, much like Taichi’s current hair but slightly shorter with her ears exposed. She looked much like a tomboy. When she was in middle school, her hair grew longer (about shoulder length). Chihaya Ayase is the protagonist of the Chihayafuru series. She is a determined school girl who possesses remarkable hearing. She believes that by persevering in karuta, she will meet her childhood friend Arata again. Because of this, she begins a karuta club at her high school with Taichi. [ source ]

I don’t know about you, but one of the major reasons why I stick with movies is that many of the anime characters I have the chance to watch can be so annoying… In this case, I almost had enough of Ayase, but there was a turn-around just right after Episode 2. I don’t think I could like another character more… Her determination to win Karuta tournament is as legendary as the stories about the top players, and her “cockiness” can sometimes affect other players’ games. Her loyalty to her team and her “do or die” attitude can be infectious and inspiring at the same time. The backstory about her idol/celebrity sister who is showered with love and affection by her parents is the necessary sympathy factor to make Chihaya even more endearing.

So the question is – Can Suzu Hirose do justice to the role? Hard question to answer precisely because Hirose, for me, is like a “work in progress” but her acting credentials is quite solid at this time already. I mean, she’s in Umimachi Diary! You can also watch the video clip above of a commercial where Hirose plays a young, determined girl (together with Nijiro Murakami).

Taichi has messy light brown hair and hazel eyes. He wears his school uniform which consists of a simple white button up shirt, a plaid tie, a brown jacket with the school crest, a black belt, gray dress pants and brown school shoes. When Taichi was younger, his hair was shorter and neater. He is considered handsome. He is also popular with girls. When he is serious playing karuta, just like Arata with his ‘water’ aura and assumable Chihaya with her ‘fire’ aura, Taichi got the ‘wind’ aura when he’s calmly and yet seriously playing karuta. Mashima is an all-around student, as he is gifted in both studies and sports. He is one of Chihaya Ayase’s childhood friends. His mother is very strict with him, telling him he should stick to activities he can win at. He is part of the Shiranami Karuta Society and is the former president of the Mizusawa Karuta Club.

Arata has spiky black hair. He has almond-shaped blue eyes, reminiscent of water, which are covered with thin round glasses. As a child, Arata’s hair was shorter, and he wore a white shirt with blue sleeves, on the shirt, it said “World Sports 4”. His older outfit consists of a gray T-shirt under a black hoodie with the letters “ER” over on the right side of his chest, simple jeans light, and red sneakers. Arata is a kind, but the quiet person who loves to play karuta. He is very caring, serious and lacks some confidence. However, he is not meek. Arata is also brilliant and is excellent when it comes to memorizing (in one day he remembered the 200 stops he had to go to deliver newspapers). When it comes to karuta, he practices very hard. He is very passionate about his dream of being the Meijin of karuta one day. Arata is also shy sometimes, and very thoughtful. Wataya is a student from Fukui who once transferred to Chihaya’s elementary school as a child. The grandson of a master karuta player, Arata inspired Chihaya to take up karuta by telling her that he thinks she has a talent for it. He had difficulty fitting in because of his Fukui dialect and his family’s poverty. His passion for karuta and his playing style are inspired by his grandfather, a Meijin (Master).  [ character descriptions taken from Chihayafuru Wikia ]

While Chihaya Ayase almost “run” the show, her two main boys provide the conflict, drama, romance and more intensity! I’m a bit conflicted on who to root for when it comes to Chihaya’s eventual partner, but I’m inclined to choose Arata. This may come as a big shock to some who, apparently, love to see Taishi gets the determined karuta “Queen.” Taishi is a heartsick young guy who has yet to declare his love, yet already felt hints of rejection, but then again, he’s the one who got a girlfriend in the first place.

There was a scene that tugged at the heart – that’s when Arata (as a young boy) delivering newspapers even when it rains. I can understand the hard facts of life, but for a young boy to go as far as waking up much earlier than anyone else just gets my sympathy. I also watched in awe as he transforms from a shy, neglected youth to a competitive, aggressive Karuta player in the blink of an eye…

I have been following Shuhei Nomura’s acting career from the beginning (saw him first in Phone Call to the Bar and considered his acting in The Summer of Whales as his best so far.) and thought, hey, this guy maybe the next big thing! But things did not turn out the way I want it. Anyway, he continues to suffer from Second Lead Syndrome – take the case of the disaster known as Koinaka, where Fukushi gets the much-coveted lead role. But there seems to be some massive score to level up his acting career via Lychee Light Club.

Sonny Chiba’s son Mackenyu distinguished himself in the WOWOW drama Yume wo Ataeru (with Nana Komatsu) while expanding his acting horizon playing a superhero. He resembles Arata in the photos released for the movie, and hopefully he can deliver some amazing dramatic scenes!

On the sport of Karuta, much are still to be discussed.

There are two seasons in the anime version, and there are three movies in the making. At this point, we’re going to update this page as soon as anything new comes out.