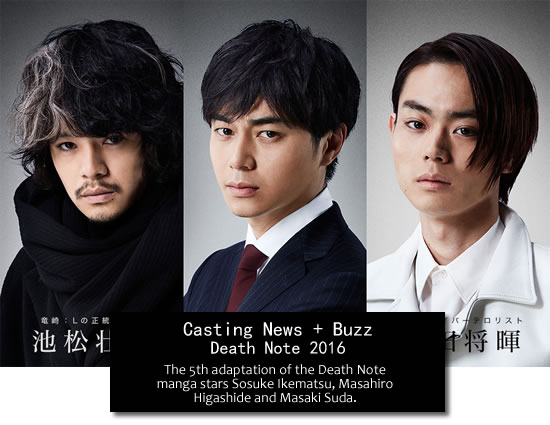 The Death Note movies of Kenichi Matsuyama and Tatsuya Fujiwara serve as my introduction to Japanese live-action movies. Matsuyama is especially memorable in Death Note for the perfect combination of subtle, thrilling and comedic acting. I saw the first Death Note movie after I watched Matsuyama in Norwegian Wood. Somebody told me about his almost perfect portrayal of the world’s “greatest detective.” Matsuken’s L is what I imagined the fictional character would be in real life.

That was late 2011, a few years after the first Death Note movie was released. Five years later, we’re into the fifth live-action adaptation of the manga made famous by Tsugumi Ohba, with illustration by Takeshi Obata.

While there are a lot of issues I want to raise about the story, it was the acting that I was most particular about but let me just say:

I dig deeper in reading some of the reviews for the first Death Note movie, and Tom Mes @Midnight Eye really ‘caught my eye’:

Everything about Death Note is two-dimensional, from the silly CGI creation Ryuk (who looks like Heath Ledger’s Joker after a Shibuya makeover) to the hero’s picture perfect home situation – the straight-laced detective and his model housewife are a conservative politician’s wet dream of responsible citizenry. Kaneko was probably too busy planning helicopter shots to give much thought to his characters, which leaves one to wonder what sort of subversive gold broken-homes specialists like Takashi Miike or Kiyoshi Kurosawa might have mined from the same material. A glance at Tatsuya Fujiwara’s role as another remorseless killer in Miike’s later The Shield of Straw (Wara no Tate, 2013) will reveal the many shades of grey a different director can bring to the same actor playing a similar character (one that arguably held more likelihood for two-dimensional portrayal than Light Yagami). [ source ]

Read between the lines. Mes’ review is more powerful and potent than if he puts some invectives.

The religious overtones are so obvious, you might ask, is the author fascinated with Christianity and loves to use such symbols as the cross and red apples?  I read a somewhat controversial explanation of its relationship – Death Note and Religion:

Death Note and Historical Reference In Death Note, Light murders thousands of criminals because they were “evil.” Back in World War 2, nuclear weapons were used to murder hundreds of thousands of innocent Japanese citizens. In this way, both Light Yagami and the United States are similar. Both justified their use of deadly weapons for a righteous cause. The U.S wanted to win a war, and Light wanted to win the war against evil.  [ source ]

Well, comparing the deaths of many Japanese civilians during WW2 with a fictional story is a bit of a stretch for me. I find it disrespectful. Though the same can be said of the ideas pushed by the Death Note author when he utilized religious symbols that are identified with the Roman Catholics (or Christians in general).

On the upcoming live action adaptation to be produced by Hollywood, I only have to mention the tweet below, which I agree in full:

Did I mention Kenichi Matsuyama and Tatsuya Fujiwara will both return in the new movie?