Instead of one, there are now six death notes located around the world.

For the uninitiated in the Death Note universe, a death note is a supernatural leather-bound notebook from a shinigami (a death god). It grants its owner the ability to kill anyone whose name and face they know. Based on the manga series written by Ohba Tsugumi and illustrated by Obata Takeshi, Death Note has become one of Japan’s most successful franchises and has spawned numerous adaptations including three movies, a drama series, an anime (obviously) and even a Hollywood LA from Blair Witch director Adam Wingard.

Death Note: Light Up The New World is a confusing title. There is no way the movie “lights” up the world but instead throws it into chaos and the commission of mass murder. But that is the least of my concerns.

As the movie begins we are introduced to three new characters: Mishima Tsukura (Higashide Masahiro), a member of the task force assigned to investigate the rise in new killings. He is also known as a death note encyclopedia for his knowledge of anything and everything about Light and L and the many crimes and incidents associated with the death note; Private Investigator Ryuzaki (Ikematsu Sosuke), the successor of the fallen L; and Shien Yuki (Suda Masaki), the new instigator/perpetrator/promoter of the Kira/Light Yagami ideology of cleansing the world of criminals, though we are not yet sure if he holds the same vision himself. Yuki is also a cyber-terrorist, and most of the hacking incidents are attributed to his own doing.

At 135 minutes the movie,  instead of focusing on previous discussions about crime and punishment and the power of a human to act like a god, spent most of that time doing criminal procedures similar to US TV series like CSI and did not succeed in that either. There are scenes that defy logic where the lead characters can not die whether by the death note or by live bullets. (Explanation: The inability to “die” was simply because his name was written in another death note at a later time, duh!)

In one of its most absurd scenes a senior member of the so-called task force read his own death note, followed the instructions to the letter, smiled and shot himself. In another equally head-scratching scene Ryuk takes away police masks (referred to as balaclava) so that Yuki can write their names while under heavy gunfire.

The good news: there is no Fujiwara Tatsuya and his bulging neck vein exaggerated acting. What we see is just a glimpse of the over-actor as the movie pays tribute to his Light Yagami character and the mention can be justified as the reason for the new death note perpetrator to “light up” the new world, whatever that means. 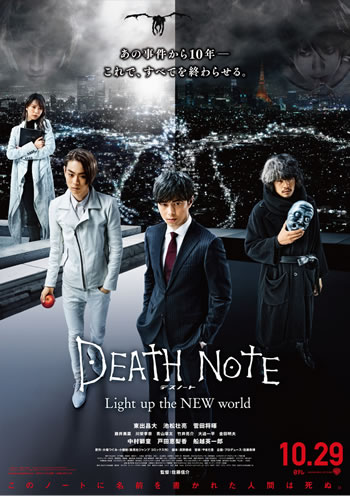 So, what went “wrong” exactly?

First, director Sato Shinsuke fails to use his own logic to make the movie even comprehensible;

Second, his actors fail to come up with their own decent interpretation. I was surprised that among the three lead actors Higashide Masahiro’s performance was the most credible. Ikematsu Sosuke, given his previous consistent and excellent acting, tried a Fujiwara tribute by being an over-actor himself. Suda Masaki appeared and disappeared like a shinigami, with no apparent impact. The intricate origami he designed had more presence than his bland character.

Lastly, the writing and the dialogue is so uninspired, it’s tragic.

I was looking forward to a quality acting showdown between Ikematsu and Suda, but got some clumsy, out of touch and underperformed “confrontation” scenes between Higashide and Ikematsu instead.

I know that many Death Note fans are looking forward to this movie, and I have seen the many “ahhs” and “yesssssss!!!!” from them. But the big question is: Did anyone understand what the movie is all about?

Actors' Bias Beyond the Frame Cross Talk Drama Features Food for Thought Generation NEXT Hitlist Indies LA Movie News Roundup Next Break Novel On the Way PD-RADAR Platform Reviews Thoughts and Things TV & Film Youngbloods
Privacy & Cookies: This site uses cookies. By continuing to use this website, you agree to their use.
To find out more, including how to control cookies, see here: Cookie Policy
wpDiscuz
2
0
Would love your thoughts, please comment.x
()
x
| Reply
Go to mobile version
Loading Comments...