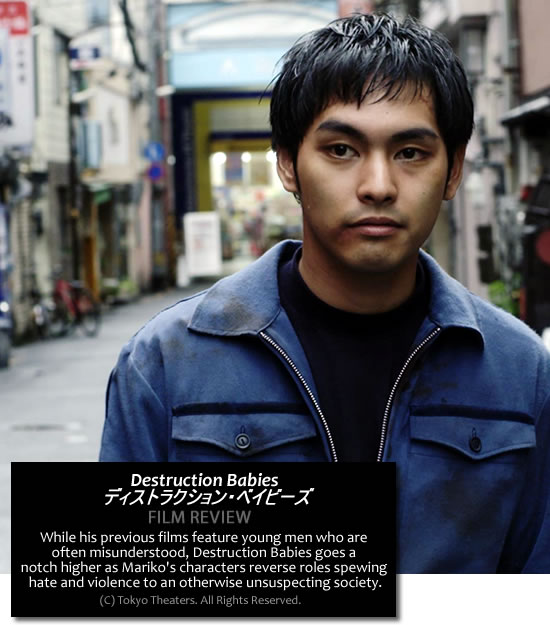 Destruction Babies is an intense tale of two brothers, Taira Ashihara (Yuya Yagira) and Shota (Nijiro Murakami) who live by themselves in a small port town. Both young men are prone to violence – the older lives by the thrill of a fight, while the younger is more restrained, yet might follow the same path of destruction.

The most extreme 108 minutes in Japanese film history?

That byline, which caught my fancy when the casting news was announced, lives up to its expectation.

The opening scene offers a picturesque view of a seaport in Mitsuhama in the western part of Matsuyama, Ehime Prefecture. Shota is about to go home from school looking bored until he sees his brother chased by a gang. The pristine, idyllic scene was replaced by chaos almost immediately.

Taira is almost beaten to a pulp, yet he rises up every time. His complete disregard for his well-being is hypnotic and incredulous at the same time. As Shota runs to rescue his brother, Taira leaves chasing his attackers.

In Taira’s relentless drive for blood and broken bones, he encounters the erratic and impassionate Yuya Kitahara (Masaki Suda) as Taira beats his classmates (including Amane Okayama). Instead of helping them, Kitahara takes photos of the scene and records a video. Taira takes a liking to the younger guy and soon enough they were buddies.

The destructive behavior of Taira, it seems, ignited something inside Kitahara as he attacks passersby – kicking them and throwing their things all over the place. Unlike Taira who picks his fights with tough men, Kitahara targets women. Soon enough, he kidnapped Nana (Nana Komatsu), a club hostess who loves to shoplift during downtime. Their journey through the night leaves more than bloodied faces and shocked witnesses. The term “painting the town red” takes a different meaning altogether!

While the brothers never saw each other except during the opening scene, Shota’s journey through the city in search of his brother is in parallel to Taira’s wrecking ball. The younger sibling appears to be an agreeable lad, except that he’s as impatient and volatile as his older brother. There is an uncanny similarity to the actors that they can be mistaken to be real-life brothers.

In what can be considered Yuya Yagira’s most challenging role to date (after Nobody Knows and Gassoh), his depiction of Taira is devoid of any human emotions. Except for a few grunts and sighs as he recovers from one bloody fight on his way to the next, he remains cool and collected despite the beatings. Unlike other actors who get overwhelmed by the confusion and chaos in filming violent, demanding scenes, Yagira looks inspired, almost serene and otherworldly. Masaki Suda, on the other hand, feels like he is trying to prove that he is the better actor. His performance appears to be forced. If his aim (and the director) is to depict a despicable character, then they have succeeded enough.

I often frown when Nana Komatsu is cast. After The World of Kanako, and a few TV series, most of what I see in her is often disappointing if not downright epic fails. As Nana, Komatsu proves her acting mettle is as uncompromising and fearless as her male co-stars. She is no victim here, as it might appear from the beginning. Her seductive yet defiant character is as violent and opportunistic as anyone. Her presence somehow dilutes the otherwise overpowering testosterone coming from Yagira, Suda and the rest of the male cast.

Distraction or Destruction Babies, however, you prefer, is an agitator of a film, and definitely not for the easily daunted.