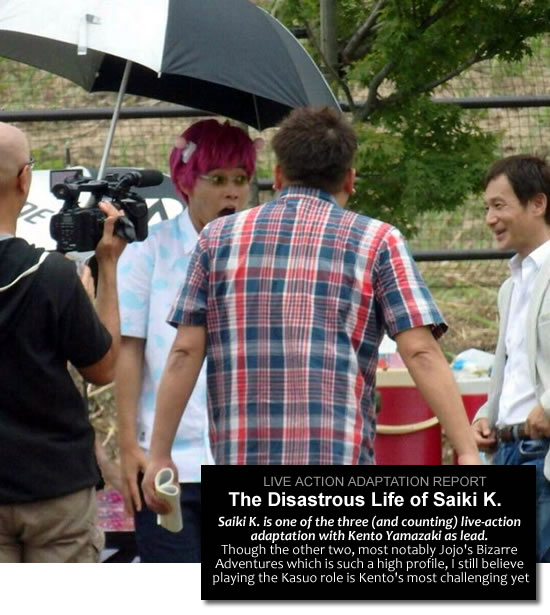 The Disastrous Life of Saiki K. is one of the three (and counting) live-action adaptation with Kento Yamazaki as lead. Though the other two, most notably Jojo’s Bizarre Adventures which is such a high profile role, I still believe playing Kasuo is Kento’s most challenging yet. Based on the manga series “Saiki Kusuo no Sainan” by Shuichi Aso, the movie version has a 2017 release date.

Kento’s reported ‘over-exposure’ is the subject of discussion among fans and haters. The big issue is whether he can deliver performances that show the individual differences of these characters. There was a time when Masaki Suda was doing 5-6 movies at the same time, but he never encountered the same hate. If only Kasuo could speak telepathically to them and say “fuck off!” that would be all right would you say?

The Disastrous Life of Saiki K. (斉木楠雄のΨ難Saiki Kusuo no Sai-nan?, lit. “The Disaster of Psi Kusuo Saiki”) is a Japanese gag manga series written and illustrated by Shūichi Asō. The series began serialization in Shueisha’s Weekly Shōnen Jump from June 2012. A television anime adaptation by J.C.Staff and EGG FIRM began airing on July 4, 2016. A live-action film is currently in development. Kusuo Saiki is a high school student who was born with all manner of psychic abilities, including telepathy, psychokinesis, teleportation, and more. Despite having all these powers, Saiki faces all kinds of hardships and tries to avoid attention as much as possible. The story follows Saiki as he attempts to secretly use his powers to live a normal high school life while dealing with his less than ordinary classmates at P.K. Academy. [ The Wiki ]

The Shōnen anime version is high on the ‘gag,’  as to be expected. There are plenty of slice of life scenes too that offer hilarious scenes featuring Kusuo as he desperately (and often failing) not to use his many superpowers. Despite the very short 4-5 minute episodes, the anime is addictive. My advice is never to watch an episode if you’re planning to do something that requires concentration. I did, and I ended up watching 24 episodes instead and failed to make any progress on my proposed activity.

As a Psi user, Kusuo is usually emotionless and constrains himself from having any friends, preferring to do whatever it takes to not to be associated with others so he doesn’t expose his powers. Due to his, he has never spoken using his voice, instead projecting his words via telepathy into the minds of his friends. Although he didn’t have any friends during his first year, during his 2nd year, a lot of his classmates like Riki, Shun, Kineshi, Aren, Kokomi, Chiyo, Reitaand Mikoto kept on bugging him and somehow changed his perspective. He later thought of himself as a friend of theirs and even called Shun his friend.

Although he doesn’t express much interest in many things due to his powers (e.g. surprise parties, romance, fortune-telling, etc), Kusuo is addicted to the dessert known as coffee jello and can be persuaded to participate in anything his friends are in as long as he receives his coffee jello. His addiction is not just limited to coffee jello but also to different kinds of sweets. Despite being able to get anything he wants without using any money, Kusuo uses money and saves up money to buy something he wants, like the Coffee Jelly Maker. His kind mom was the sole reason why he didn’t abuse his own psychic abilities for nefarious activities. Kusuo also has an interest in television shows, due to electronics being unaffected by his powers, allowing him to enjoy dramas/scenes that prevent the use of his telepathy which leaves him open to spoilers from the thoughts of others. [ Wiki on Kasuo Saiki ]

Youtube video clips above are samples of the many scenes available in the anime. There are 120 episodes to stream until December.

The film wrapped up last October, as reported by Kento Yamazaki himself.

On a somewhat unrelated issue, when Kento was asked about his role in Mare and if there are any similarities, his reply (for me) can also apply for his role in this new live action:

“Once I start talking, I would never stop. Even though I seldom get compliments about being stubborn or passionate, I can share the same feeling with Keita about persisting for something I want to do. There are things that we don’t have in common, but I want to try doing some of those. Also, maybe we are quite similar about being able to concentrate on the things we like to do.” [ source ]

Kasuo can be as passionate and as stubborn as Keita too. If the pervasive loneliness of Rei Kiriyama is evident in Ryunosuke Kamiki’s upcoming characterization, I also believed that Kento Yamazaki’s ability to project a passionate and fiercely independent character in Kasuo is as evident and is something we can expect in the live action version.