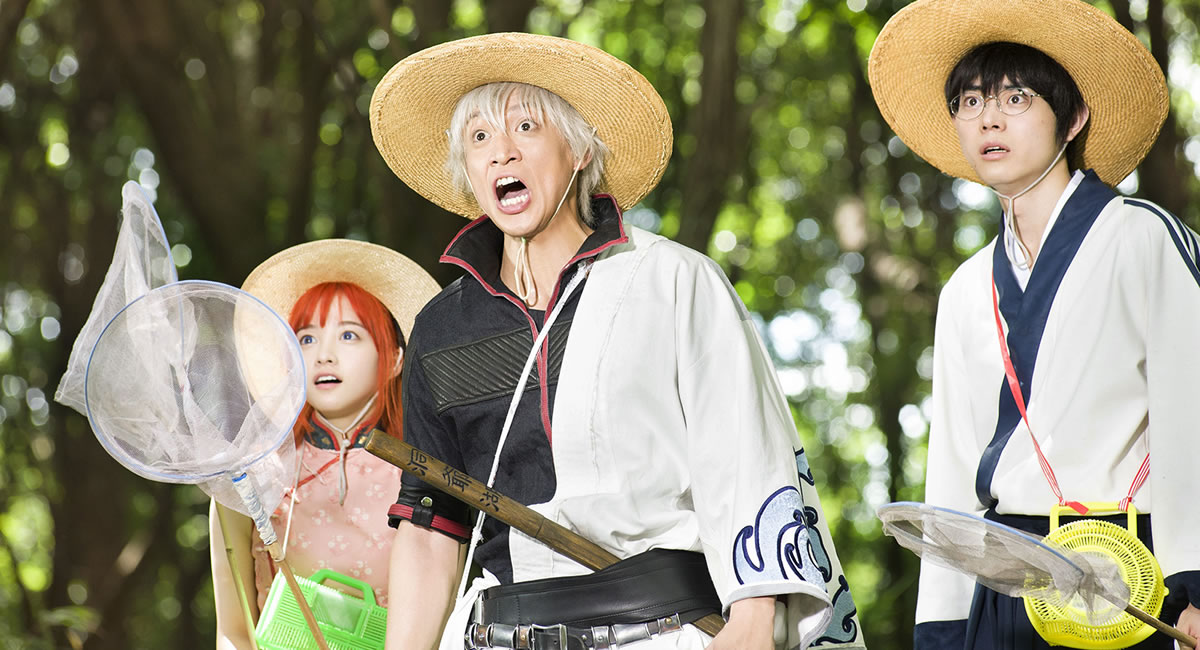 Gintama is a popular shounen manga that features the adventures of Sakata Gintoki and his makeshift family (Shimura Shinpachi and Kagura).

The story is set in a parallel universe, in the Edo period. After an alien race called the Amantos invaded earth, humans waged war with them before the Shogunate decided to make peace.

Under the Shogunate, the Shinsengumi work to maintain civilian order, thereby also inevitably become involved in the various troubles and adventures that Gintoki and his team are embroiled in.

The love-hate relationship between the Shinsengumi and Gintoki is due to Gintoki’s past (which is not covered much in this film) and Gintoki’s missions against criminals, though they tend to ally with him due to the nature of his jobs. Several characters who were involved in Gintoki’s past, such as Katsura Kotarou and Takasugi Shinsuke, also make an appearance, but while Katsura maintains friendly relations with Gintoki, Takasugi aims to destroy the Shogunate.

In this film, no one was particularly outstanding in terms of acting nor left a significant impression, though there were a couple who stood out slightly more than the others.

Oguri Shun performed as expected, with no surprises, pleasant or otherwise. In fact, the enjoyability of his character hinged more on the dialogue written for it than on his performance itself. Suda Masaki delivered run of the mill performances, with Suda performing below expectations with some overacting goldfish eyes and also a tad too much forcefulness. Suda is someone who always treads near the treacherous border of the Land of Over-Acting but he has so far been able to reign it in, though his fine controls still need further training. As such, he needs to work with a director who can help him to exercise restraint. Oguri typically falls in the above average range and Suda near the top range on an average day from my past experiences watching them in various genres and roles, so to have both of them not perform up to expectations was a bizarre surprise, hence I conclude that it might have been due to the direction instead.

Of all the characters, Okada Masaki’s Katsura Kotaro had one of the most well-balanced ratios of both serious and comedic scenes and all his scenes were entertaining and comfortably alternated between drama and comedy. Katsura was given a badass (for lack of a better term) entrance in which he stopped the Shinsengumi from their pursuit of Sakata Gintoki. In that moment, the spotlight was cast on Okada’s Katsura and it was as if he knew and proceeded to effortlessly draw the spotlight onto his character. Throughout the film, Okada continued to emanate a good presence as Katsura and his scenes with Elizabeth also showcased his flair for comedy. Okada was and has always been considered as pretty, but it comforts me that he has solidified his acting credentials over the years with gradually improving performances that are a far cry from his early awkward days.

Another actor worth mentioning is Hashimoto Kanna. I did not expect much from her since her main occupation is not an actor, but I was pleasantly surprised that she threw away all idol burdens and her image as an angel and tried her best to entertain as Kagura. There certainly were moments where she could have been less forceful in her delivery and try to embody and ‘be’ the character more, but it was a healthy improvement from her acting in Assassination Classroom.

Coming back to my point about there being no particular character or actor leaving a significant impression, there are a few possible reasons for such a result. Gintama had many characters, but most of them possessed too little screen time to be effective and were only sufficient to please manga/anime fans who came to see how their favourite characters would look like in live-action. This resulted in a feeling that one was watching an endless parade of characters past the screen and the approach was very touch-and-go and cursory.

As a result of such an approach, Yagira Yuya (Hijikata) and Yoshizawa Ryo (Okita) were under-utilized. There was also this awkward moment when Okita left Hijikata to fight Okada and then proceeded to disappear from the story. It had the unsatisfying result of making Shinsengumi appear as mere cannon fodder since all they did was attack a bit, while the build-up to the climax and the climax itself did not truly involve them at all. The resolution did not really include them either and it left everything feeling very unresolved. However, it both surprised me and not. Yagira is a veteran and won the Best Actor Award at Cannes at the ripe old age of 14 and Yoshizawa is also a solid actor who is recently on the rise, yet Yagira is less of a ‘popular’ actor than the likes of Yamazaki Kento or Suda Masaki and more of the credible solid type that speaks more with skills than with the usual packaging, similar to Sometani Shota. Yoshizawa is not new to the scene but it was only recently that Amuse began to increase the hype around him, giving him meatier roles in the first and second tier, promoting him as part of the ‘core’ of the Amuse Team Handsome boys and packaging him with Kamiki Ryunosuke, so understandably, the role of Okita also functioned more as credential-building and exposure-increase than as a legitimate acting opportunity. But fret not, a short pre-film drama focusing on the Mitsuba Arc was set aside for Yagira and Yoshizawa, which was probably a way the producers were capitalizing on the fact that they had a Cannes award winner and a solid rising star at their disposal.

Over on the side of the villains, Arai Hirofumi as Okada Nizou deserves center spot. Unrecognisable in his getup and acting as Okada Nizou, Arai became Okada Nizou himself and the actor Arai Hirofumi disappeared from the sight of the audience. He nailed the sinister feeling and whenever he appeared, it felt as if a dark shadow fell upon the screen, such as the ominous extent of his presence.  I always felt that in terms of connectivity, Arai was sometimes hit-or-miss in his performances, but here he did not disappoint. I hope that he will continue to consistently deliver performances of such quality in the future.

Disappointingly, however, Nanao did her character with too much force and went over-the-top. Matako is violent, feisty and merciless, but it was unnecessary to force out every line of dialogue as if one was constipating in order to come across as that. If anything, Matako was reduced to brashness only and became a very effective source of annoyance.

Without revealing too much of the plot and only leveraging on the few stills released by them, I would like to mention that the entire beetle hunting section at the beginning was done in a rather ingenious manner that not only drew out the quirks of each individual character, but also provided for a smooth introduction of various characters in a gradual manner without feeling contrived. On the other hand, the length of the film was not effectively utilized. Chunks of time were wasted on some unimportant things, such as an animated variety show parody at the start. The dialogue in that section was mostly excess fluff and did nothing much to contribute to the overall development of plot or characters. The only gem from it was the shoutout to TBS & Jojo Bizarre’s Adventure (also showing in cinemas around the same time), which I must concede was a witty meta-reference.

Some of the jokes were hilarious, like those in the bug hunting section, and Okita camouflaging as a bug took the cake for that scene. On the other hand, quite a couple of jokes were lame and actually threw off the narrative and comedic rhythm due to their relatively random nature and irrelevancy to the story. Those gags failed to contribute and only served to make the audience cringe in secondhand embarrassment and lose the momentum they possessed when diving into the fictional world. The film was fairly faithful and when it hit the comedic sweet-spot at times (not all the time as seen above), the audience roared with laughter.

Takasugi Shinsuke had an awe-inspiring entrance where he stood lazily against the backdrop of a moon. However, the film hyped and set up Domoto Tsuyoshi’s Takasugi Shinsuke so much as the dangerous foil to Gintama’s protagonist role and positioned him as the ultimate big boss, but the climax scene somehow felt rather underwhelming. This was due to spending much of the time against Okada and Benizakura which resulted in insufficient time for Takasugi, who mainly just sat around and gave comments in a cool manner without being truly active. It made the character very passive and detached from all the action, and the only time when Takasugi was truly actively in the heat of things was in the final showdown. It did not help that the execution of the showdown between Gin and Takasugi fell flat and the desperate setup for a potential sequel was blindingly obvious, leaving one feeling cheated with such a bail-out.

Another issue with the film was the various calefares on the street, who appeared as if they belonged to a tacky low-budget cosplay party. Try harder. Adding on to this, the Amantos could have been more threatening if they chose to use CGI instead of felt head masks, which made them look like mascots at a shopping mall event.

In addition, the camera work was messy at times, especially during the action scenes. The choreography could not be seen clearly with the dizzying and frequent changes of camera angles, and some of the rather weird shots ended up blocking the choreography from view.

And now, being Gintama, what would it be without meta references? The many meta references present in the film required extensive & current knowledge of Japanese pop culture, manga, anime, film, drama, entertainment industry and some general knowledge. The gags generated laughs when referencing popular projects but left part of he less-Japanese-drama-informed audience scratching their heads for more unfamiliar references such as Aibou, which was popular in Japan but otherwise unfamiliar to those outside or not interested in Japanese dramas. The results were mixed, either enhancing the comedic experience or making for an awkward ‘huh?’ moment, depending on one’s wealth of Japanese pop-cultural knowledge.

Nonetheless, Gintama’s style allows for a certain degree of campiness, and there is a slight irreverence, just enough for the audience to understand that the jokes are in good faith and not to take everything too seriously. It was an occasionally enjoyable, but largely forgettable affair. To a rewatch of it I say, ‘Pass.’