Written, produced and directed by Takeba Liza, Haruko’s Paranormal Laboratory is the filmmaker’s follow-up to her award-winning film The Pinkie. This time, instead of a young man’s finger cloned into his duplicate, the romantic interest of Takeba’s heroine is a television miraculously transformed into a handsome, charming young stud.

Our heroine, Haruko (Nozaki Moeka), appears like any normal young girl, but she’s a loner with hardly any friends. Her desire to engage in something supernatural sets her apart from girls her age.

Unfortunately, obsessing over aliens, ghosts, and UFOs made her a target of bullying and she was made to suffer for it. Being bullied aside, she manages to take her time, graduate and work at a local store.

She also enjoys being herself in front of an old TV set. By watching variety shows and throwing expletives at TV personalities and characters in commercials, it seems, is being counted. As the auto-counter hits 10,000 curse-clicks, the TV transforms into a man (Nakamura Aoi). The transformation is not exactly ideal as ‘terebi’ has a TV set stuck on its head.

Dependent on Haruko for all his basic needs – including a place to stay and food to eat – terebi felt it’s his duty to serve her, lest he is accused of being a freeloader. What appears like a practical relationship from the beginning soon became romantic and intimate. Apart from the sex, they seem to enjoy each other’s company. Being a good-looking fellow, one of Haruko’s co-workers took a special interest in terebi, and other matronly women followed suit. They all, however, failed to seduce him.

Soon enough, terebi was discovered by a TV exec who gave the young man a slot in one of his shows – knowing 12 languages is apparently something terebi can boast to know. Popular and financially independent, terebi pursues his own personal interests.

Will the couple stay together or grow apart? 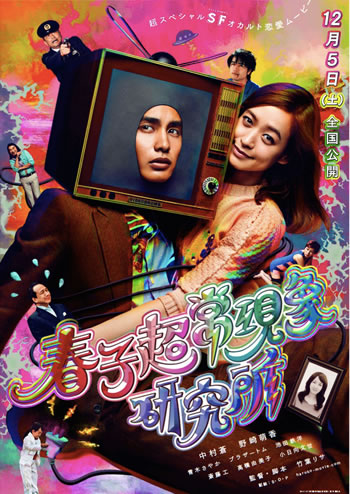 With a groovy funky soundtrack and psychedelic colors all around, Haruko’s Paranormal Laboratory is also sexy and suggestive in both character depiction and social commentary.  As to be expected from a female director, it’s the male character who is the object of desire and rightly so – Nakamura Aoi is shown with only an apron wrap around his body as he cooks for Haruko and plenty more eye candy in between scenes.

Almost thirty-something Nozaki Moeka as Haruko is an excellent casting choice and she has good chemistry with Nakamura.

Haruko’s Paranormal Laboratory is a quirky and weird film and is obviously done on a small budget. Such financial constraint is apparent in many scenes and if you’re not used to Japanese jokes, then it would be futile to enjoy and appreciate the movie as much as the locals. Side stories, uniquely Japanese, are also tackled, including hikikomori, variety shows, and cosplay.

Still, director Takeba did not steer too far away from the main premise of the film – a weird loner in search of love and connection, even though she finds that connection with a humanoid, yet charming young man.