Playing the dual role of the devil and the victim, Takeru Satoh headlines If Cats Disappeared From the World. Directed by Akira Nagai (who made the comedy ‘Judge!’ and will next work on ‘Teiichi no Kuni’) the film is primarily a launching pad for Satoh to signal his foray into dramatic roles.

The Rurouni Kenshin actor has made significant acting strides as he delineates the story of a young man who is diagnosed to have a terminal illness.

His role reminds me of Melville Poupaud’s Romain in Francois Ozon’s ‘Time To Leave.’ – where Poupaud’s character suffers the same fate as Satoh’s but without the duality. In the French film, there is no devil to taunt the dying man, though he was rude and cruel to the people who love him. Both are compelling films that showcase the complex relationship of the main character with his family, lover, and friends.

While there are restraint and reservation in Ozon’s film, Nagai chose to make his movie more touching – one could think of it as a tear-jerker.

After falling from his bike, our main character (only named the postman) was advised by his doctor that he is gravely ill and will die any day. Before he could even face his grief, someone who looks exactly like him appears and introduced himself as the devil. He can live another day if he chooses something in the world that will disappear, says the devil. 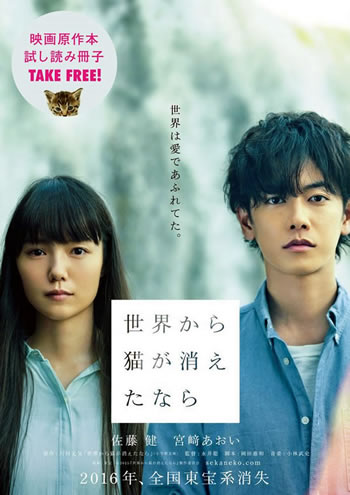 What follows is the desperate act of the young man as he tried to maximize his time and spent it with the people he loves. When the devil chooses “phone” to disappear, he went to his one true love and spent a day with her (played by Aoi Miyazaki), recalling their happy times together in Japan and Buenos Aires. The scenes in the Argentinean capital is especially poignant as they witnessed the death of a friend.

When “movie” was chosen to disappear, he talks with his best friend (Gaku Hamada). Other things were to go as postman tries to cling to life.

In what can be considered the most emotional and dramatic moment in the film, our postman thanks his Mom for love and inspiration through the years. The veteran actress, Mieko Harada who played the mother, gave a subdued and heartfelt performance and tried not to overwhelm Satoh. The success of the film relied on both actors as playing a convincing mom and son, and that they did.

The film is based on the novel “Sekai kara Neko ga Kieta nara” by film producer Genki Kawamura. Kawamura is best known for producing such acclaimed films as Kagehinata ni Saku (Flowers in the Shadow), Detroit Metal City, Confessions and Akunin (Villain). In a recent interview, he said:

There’s a kind of “sakoku” (the period when Japan was closed to the outside world) tendency at the moment. That’s not necessarily a bad thing; when it happened before a unique and rich culture developed. So if that’s going to happen now, then really interesting art and ideas may actually develop, and then at some point they’ll be appreciated around the world and Japan will once again look outside for influences. [ source ]

There is a reflection of that in the film as Kawamura pays tribute to some of the world’s iconic films – with Satoh and Miyazaki getting introduced via Fritz Lang’s Metropolis.

If Takeru Satoh will someday recall on his acting career, this movie is the realization that he can play something other than a samurai hero. While Bakuman gave his fans and moviegoers a glimpse into his ‘capabilities’ as an actor, If Cats Disappeared From the World, is the assurance that he is an actor who can deliver.

The powers-that-be in Japan need not look any further if they want to give Satoh an acting award.