Director Lee Sang-Il returns to crime drama-thriller, in the tradition of the award-winning Villain (Akunin), as he collaborates for the second time with Yoshida Shuichi for the big screen adaptation of the author’s 2014 novel, Rage (Ikari). Observers of the filmmaker remark that Sang-Il is hard to classify since he has done both ‘feel good’ and hard-hitting movies. But the director finds his passion for making films about human greed and propensity to violence and their intimate interactions. Rage tells the story of a young man who murdered a couple, becomes a fugitive and escapes while undergoing plastic surgery.

A year after the gruesome double murder, three new faces appear in three different spots – in downtown Tokyo, a small fishing village in Chiba, and near the US-military installations in Okinawa. Are these young men – in any way – connected to the highly publicized murder?

The movie is about these suspicious individuals as much as the people who became involved with them. With an all-star cast that includes Wanatabe Ken and Tsumabuki Satoshi, the film features Matsuyama Kenichi, Ayano Gou, and Moriyama Mirai as the three suspects.

Yuma (Tsumabuki) is as jaded as any young gay men who has encountered too many tricksters in search for the ideal lover. But Naoto (Ayano) appears more ‘frail’ than his usual targets as Yuma cruises a Tokyo bathhouse and tops the appealing young man. After the encounter, Naoto follows Yuma to his apartment. With a terminally-ill mother, Yuma is in desperate need of a companion and Naoto is sympathetic enough to lend a helping hand. They began to live together. Yuma works while Naoto consoles his mom. They are settling into a routine when the news about the murder hugs the headline once again – revealing what the fugitive looks like.

In Chiba, Yohei (Watanabe) prevents his daughter (Miyazaki Aoi) from becoming a sex worker and takes her back home. His worries, however, multiplies as the hapless and desperate girl befriends a stranger (Matsuyama) and no sooner enters into a serious relationship with the young man. Just like Naoto, the stranger, Tashiro, has an uncanny similarity to the fugitive.

A mother and her daughter arrive in Okinawa. Komiya (Hirose Suzu) explores the picturesque islands as she accustoms herself to her new home. She becomes attracted to Shingo (Moriyama), a backpacker who stays in one isolated island. Matters took a bad turn when Komiya was sexually assaulted while looking for Shingo. Townfolks also grew suspicious as the newcomer looks so similar to the suspect.

What happens next in each of these stories comprise the final quarter of the movie and the ‘final reveal’ as to who among the suspects is the murderer. 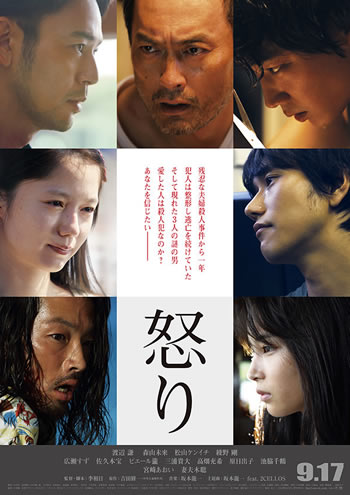 While I like the premise behind the introduction of the three storylines – that of searching for an intimate connection, one of my biggest complaints is that the film tackles too many subjects – gay relationship, US military presence and a hint of crimes perpetrated by US soldiers, sex workers, traditional practices limited to local settings, and peculiar Japanese criminal investigation procedures.

Director Sang-Il explains that ‘Rage’ is all about people, how relationships evolve with trust and wither with suspicion, but to me, the final reveal is forced and unrealistic. I understand that people become suspicious, especially to a newcomer, and any hint of scandal – in this case, murder, is enough to raise doubts resulting in terrible consequences. The movie succeeds in portraying human nature in this case, but since we’re torn as to who among the three is the real killer, explaining the whys more than the hows mattered more.

I understand why Tsumabuki Satoshi find acclaim for his role as the promiscuous young gay executive. There is a ‘liberating’ feeling in portraying a character that would be considered ‘taboo’ if done in a TV drama. Among the hysterical reactions to the aftermath of the said ‘final reveal’, Tsumabuki did his scene with subtleness and obvious heartache. His take is so effective, that Miyazaki and Hirose turn become so inconsequential.

Ikari reminds me of Alejandro González Iñárritu’s movies –  Amores Perros (great!) and BABEL (not so great) in as much as finding a way to ‘reconcile’ unrelated plots. In this case, the stories are not compelling enough, no matter how good the actors playing the characters.