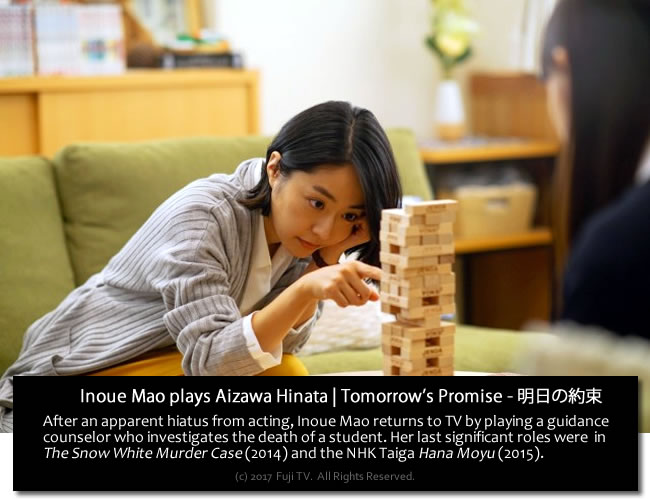 One of the leading drama stars on Japanese TV, Inoue Mao (30), remains a respected and most sought-after actress in an industry that values appearance, popularity, and connection. In a series of articles, she reflects on her acting career amidst personal challenges and the hype on ratings. This article partakes Inoue’s acting journey from such interviews and this author’s particular (and biased) interpretation.

Looking back, it was about 12 years ago when she plays the role of Makino Tsukushi in the Asian phenomenon known as Boys Over Flowers. Inoue has accomplished a few acting milestones right after: an asadora Ohisama (NHK / 2011), a taiga drama Hanamoyu (NHK / 2015), a Best Actress trophy for Rebirth – Youkame no Semi (2011), a Best Actress nom for The Snow White Murder Case (2014), and a venture into voice acting.

Even with such impressive accomplishments, she was also subjected to criticism as a result of Hanamoyu’s ‘failing’ (sic) ratings.

The taiga drama is the most extravagant drama production of all with a year-long broadcast. By just being the face of NHK’s main program, her fanbase widens to all age ranges and becomes an in-demand actress in the industry. However, when taiga drama ratings take a downturn, fault-finding articles will be naturally on the rise. “There were lots of false articles being written about me that I always end up laughing every time, but there were parts that hit me hard. I can’t say I can just ignore the drama ratings but I need to put up a cheerful face despite that. As for the inspiration to keep going, more than the drama ratings themselves, for the sake of the people who watch it, we try to make it as a drama that they can fully understand. So with that, there’s this thought that we’re sticking with this until the very end.” [source]

Now that she is back after a short hiatus, Inoue tackles a character that is, at best, complicated. As Aizawa Hinata in the now-running drama series Ashita no Yakusoku (Fuji TV-KTV), she portrays a woman who offers advice to young high school students while fighting her own inner demons as an overprotected child.

One of the best acting features of Inoue Mao is her ability to convey emotions by differing facial expressions, and by the tone of her voice. Her previously ‘kawaii’ mode of yesteryears has turned into something serious – an excellent way to transform her persona as ‘ordinary’ yet ready to become ‘extraordinary’ as the scene requires. Episode 1 offers a glimpse into her childhood and what she has to go through. Being the daughter of an overprotective mother (Tezuka Satomi), who assumes no wrong, and is oh-so self-righteous! is an acting challenge in itself. [read Ep1 review of Ashita no Yakusoku]

Inoue confirms my drama analysis in an interview with Entertainment Station (and properly interpreted in potato_carrot’s LiveJournal entry):

She gives pieces of advice to people but she has worries to which she keeps to herself. While studying psychology, she might have been aware of herself and studied for self-improvement. But as she gets closer to the students, the hidden problems she has are coming to surface. She is a troubled person who must face her own burden.

In an article I have written 3 years ago, I said:

Recently, a new movie starring the 27-year old award-winning actress was released in Japan entitled Snow White Murder Case. While she is also the star of another movie (The Eternal Zero) which broke box office records, her role in Snow White Murder Case (Shirayuki hime satsujin jiken) has a more significant effect on her acting career. It’s supposed to be a follow-up to her award-winning role in Rebirth, and while the next Japan Academy Awards is more than a year away, there is already some indication that she might make it on the list. [read full article]

And I was right!

Many people say it takes hard work and dedication to succeed in the acting world. But I beg to disagree. I believe that it has something to do with sheer talent and some luck.

But more than anyone else, it’s the ‘veteran’ Inoue Mao who fusses more over specific details. “When I was about to send out Kusaka Genzui (Fumi’s first husband portrayed by Higashide Masahiro) for the last time, he told me the line [I want to see your smile]. I don’t want to cry at that point but the more I think that I must send him off with a smile, I ended tearing up. When I realised I did cry, I pleaded the staff to erase my tears through CG effects.” [source]

On ‘luck’ here’s my take on it: She was at the right place, at the right time. She entered the drama scene at the age of 5 and got the meaty parts as she progresses. She won’t be getting these dramatic roles if people don’t believe her, but then again, if she took a different course in life, everything would have been naught. Maybe that’s more ‘destiny’ than luck.

Now, let’s get back to Ashita no Yakusoku:

On playing a Guidance counselor:  It’s a difficult job. You’re not a teacher, not even a doctor. There are no scenes where you dramatically cure something. However, it’s role who heals people, those who carry unseen worries by themselves. It’s really hard but it’s better to concretize those inner conflicts.

On accepting the role: Firstly, one of the reasons is the timing that I can do something like this. However, at first, I was moved by the enthusiasm of the ikemen producer (Kasai Hideyuki). (laughs). I don’t remember it well but it’s something like “The group of samurais is polishing their swords waiting for you.” I received this as a letter and I wondered if ikemens do polish their swords (laughs). With that, I was convinced by that ikemen and accepted this project. (laughs)

And on to Episode 2 of the drama!

Reference: Interview excerpts (already translated into English) was taken from: