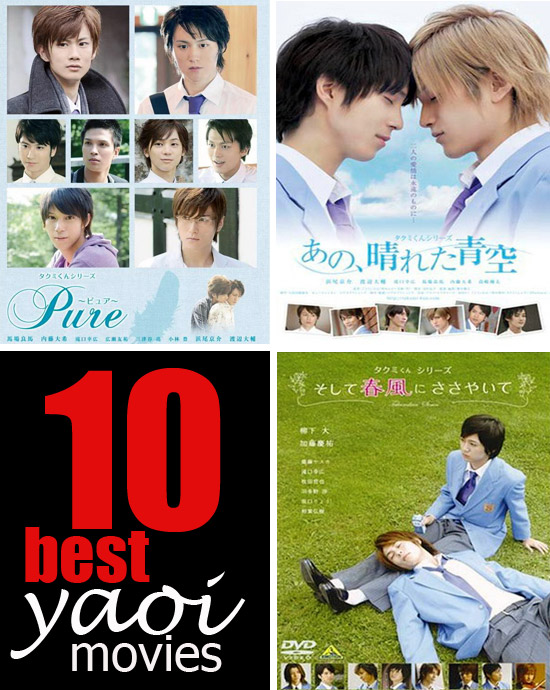 Yaoi movies don’t exist for bed (read: sex) scenes alone. Of course, moviegoers who watch love stories between young boys would expect such scenes to spice it up. Filmmakers are also ‘obliged’ to add them up since people would expect them. With this frame of mind, I went to watching the first movie in the Takumi Kun Series.

Set in Shidou Gakuen, an all-boys boarding school up in the mountains, Takumi Kun encompasses all other BL movies, in its ambition and scope – with an array of exciting and promising young actors, breathtaking location, a memorable and poignant musical score, and stories that explore the beauty and pain of young love. Takumi-Kun may be considered a trailblazer of sorts for being simply the best of its kind. But not everything is perfect, as you will see from the critique below.

This post is the final part in our BL/Yaoi series.

Bullies are everywhere. And so is love, if you’re lucky that is. But not everyone is molested by his brother, while the parents go about their ways as if nothing has happened. What would you do if your parents even blame you for being molested? I would probably go insane and jump from a building, how can I even think of asking for psychiatric help, I’m a high school student, for chrissake! With a situation like that, I would probably acquire the Human phobia syndrome myself.

Before we get into the movies, I need to tell these things about Takumi Hayama, our protagonist. You see, Takumi is not your ordinary school boy. With everything going from bad to worst, he still stood his ground, and that takes a lot of courage and conviction!

So is everything going to be just that – regular bullying, constant nightmare, boring studies and no friend?

In Movie One (Soshite Harukaze ni Sasayaite), Takumi finds Saki Giichi, and everything else fades into the scene.

Storyline: Set at Shidou Gakuin, a boys’ Boarding school, situated off the beaten track. In the second year at school, Takumi Hayama (Tomo Yanagishita) is assigned a room in a dorm to share with Giichi Saki (Keisuke Kato), AKA Gii. Gii was brought up abroad and is the school idol with his exceptional academic performance, as well as his good looks. One day, Gii confesses to Takumi that he has been in love with him for some time. This surprising truth of events unsettles Takumi. However, he comes to realize the true sensitivity of Gii.

Reaction and Critique: Your roommate is the most popular guy in school, so expect everyone to envy you. If you’re not alert enough, they might even kidnap you and throw you into the sea. But that would make for a bad movie right? So what happens next is sweet and romantic, you discovered how awesome your roommate is, and that he’s in love with you.

Since this is the first movie I watched in the series, I am happy as a bee. While I have some reservations regarding Tomo Yanagishita’s looks, he was quite decent and convincing as the struggling Takumi. Kato, on the other hand, looked the part – great looking, sexy without being boastful, and has a charm that can light up the screen. The only problem is making them act like real lovers, which is the director’s shortcoming. There is a lack of chemistry between the two and many of their scenes were supposedly romantic but turned out clumsy and awkward.

One important question I have in mind. If I’m a boy, and you’re in love with me, and you also happens to be a kid, how can you convince me that what you say is true? I believed that this is the strongest reason why the movie succeeded. I’m not going to give away everything, so you need to watch it yourself. To those who have seen the movie already, I think that you will agree with me about this. The scenes involving the violin are the ones I’m talking about, so you certainly get the drift here…

This assumption is also the reason why four more movies were made to continue the story of Takumi and Gii. There’s a lot more to discover about these high school boys, and one movie is simply not enough.

[ Acknowledgment: Screenshots were taken from this blog. ]

Storyline: Takumi and Gii are now a couple, but Takumi is still uncomfortable showing his affection. Not only that, but Takumi grows jealous when Gii starts paying attention to a good-looking first-year student. Is Gii’s love fickle?

Reaction and Critique: The second movie in the series saw a change of leads. Takumi is now played by Kyousuke Hamao, while Daisuke Watanabe portrays Gii. The new cast is also the most important factor why it became more popular than the original. It’s all about the chemistry and with Kyousuke and Watanabe, you can feel the emotional attachment and the bonding.

It’s Kyousuke’s movie. His intense acting is simply beyond his years. You can feel the pain in his eyes – but he is no girly boy – there are fire and rage, jealousy and desire, expectation and desperation. From start to finish, Hamao made sure we can relate to his struggles.

Daisuke Watanabe, on the other hand, is no second rate actor himself. He has a lot of big moments showcasing his range. The initial scene when he approached Takumi after the school break was a blast. The public kiss is just a prelude of what’s to come, and there’s a lot to watch. The side story featuring Yuki Hiyori (Morita) and Yuta Takahashi (Suzuki) was both bittersweet and tragic. Takahashi, in particular, was poignant in his portrayal of the dying Suzuki.

[ Acknowledgment: Photos are taken from the official movie site + from this blog ]

Storyline: Another school year is starting. Upon meeting up with Gii, Takumi got worried when Gii suddenly acted cold and distant. Could their relationship be in danger for real this time?

Reaction and Critique: The plot thickens and just like other movie franchise, there are new characters. While this is not surprising, the quality of the new young actors is noteworthy. With Gii no longer Takumi’s roommate, someone has to occupy the empty bed. Enters Misu Arata (played with impeccable relish by Baba Ryouma). Arata, it seems, hates Gii’s guts and the hostility between the two heightened the already strained relationship between Takumi and Gii.

Baba Ryouma takes on the role of Misu Arata with conviction. You have to respect his acting and those eyes! Hamao, with an impressive debut in Part 2, levels up his acting with the return of his phobia – unable to accept human touch. He cringes and turns away from anyone and with Gii’s ‘despicable’ attitude, he has no one to turn. But Misu has other plans, can he replace Gii and take Takumi under his wings?

Storyline: The spotlight is on another couple, this time, Misu Arata (Baba Ryouma) and Shingyouji Kanemitsu (Naitou Taiki). Shingyouji is desperately in love and smitten by the assertive Misu, Takumi’s roommate. The same guy who hates Gii’s guts. What follows is a parallel of sorts featuring the relationship of Misu and Shingyouji as they both struggled with their feelings.

Gii and Takumi take the sideline but also gained enough screentime to show how deep their relationship has been after a year.

Reaction and Critique: No other movie in the series was the Seme-Uke formula more pronounced than in Pure. While Takumi and Gii settle down and enjoy their comfort zone, Shingyouji, the new kid on the block, struggles with his emotions and his seemingly unrequited love is about to become tragic. His object of affection, Misu Arata (Takumi’s roommate) is as hardline as one could get. Regarded as one of the school’s leaders, he commands attention and respect. Armed with an impressive academic credential, he rivals Gii’s popularity and attracts the attention of many of the younger students. Are they going to become a couple or is someone else going to snatch Misu away from the young Shingyouji?

Baba Ryouma continues to make waves and rivals even the two leads in the acting department. Naitou Taiki is also making audiences feel the love and his struggles. Their story of worthy of the series, with a good number of moving and memorable scenes to boot.

Storyline: To break away from the past, Takumi is forced to face the ghost of his older brother and in so doing, he seeks the help of Gii to get him passed the tragedy. Takumi’s painful experience of betrayal cuts deep and he needs all the help and support that only Gii can offer. But is Gii willing to be on Takumi’s side all the time? How about his personal interests as one of the school’s leading figure?

Reaction and Critique: This is reportedly the last movie in the Takumi Kun Series. While there are speculations that more stories from the original manga might be adapted into films, Hamao and Daisuke will no longer appear in any future productions. With fans’ expectations at an all-time high, Hamao and Daisuke and the rest of the cast need to do their best to make sure the series end with a blast. While everyone knows Takumi is the submissive one (Uke), he never showed Gii any animosity. That is about to change, as Takumi almost reach the breaking point. With the looming death anniversary of his older brother and the pressure from his family to ensure that he visit the grave, can Takumi withstand it all, without Gii on his side?

Watanabe, who I felt, played second fiddle to Kyousuke ensured his acting ring true and delivered a solid performance. I was rooting for him from the time Takumi rejected him until the final scene. You cannot help but admire the guy.