There was a time when Japanese romantic comedies rule. Now, it’s the Koreans, the Chinese and more recently the Thais and the Filipinos who are producing some exciting new shows. But hey, are some of these popular titles inspired by such beloved Japanese romcoms? I’m not going to dwell more into the current craze, this site being a loyal Japanese entertainment blog will do the “job” its supposed to do.

Japanese manga, the source of most of these romantic comedies, maybe the “culprit” in what some people described as the decline in Japanese movies, but then again, how are the viewers supposed to react? Boycott them? Change genre and settle for horror? Go to the Koreans? Nah. While I have my complaints, I’d rather embrace them rather than reject them…

Anyway, what are some of the most exciting Japanese rom-com nowadays? Let’s start with Your Lie in April (Shigatsu wa Kimi no Uso – 四月は君の嘘). Now, you see I just watched the latest video clip for Your Lie in April, featuring favorites Kento Yamazaki and Taishi Nakagawa, with Japan’s current darling Suzu Hirose. Joining the lead cast is one of Solomon’s Perjury’s standouts, Anna Ishii (who looks so gorgeous here!).

Music accompanies the path of the human metronome, the prodigious pianist Kousei Arima. But after the passing of his mother, Saki Arima, Kousei falls into a downward spiral, rendering him unable to hear the sound of his own piano. Two years later, Kousei still avoids the piano, leaving behind his admirers and rivals, and lives a colorless life alongside his friends Tsubaki Sawabe and Ryouta Watari. However, everything changes when he meets a beautiful violinist, Kaori Miyazono, who stirs up his world and sets him on a journey to face music again. Based on the manga series of the same name, Shigatsu wa Kimi no Uso approaches the story of Kousei’s recovery as he discovers that music is more than playing each note perfectly, and a single melody can bring in the fresh spring air of April. [ source ]

I’m still convinced that Kento will – some day, perhaps in the near future – venture into portraying dark, brooding characters (in the tradition of Yagira, Sometani, et al), but it seems he’s destined to do some more rom-com, unless the casting gods will begin to look at him at a different light. His co-star Taishi Nakagawa can take up his place. Nakagawa, mind you, is no small fry. The young actor has also shown some of his acting ‘sparks’, so having him play lead romantic roles in also a sort of blessing in disguise for rom-com lovers.

Then we have Aozora Yell. The biggest attraction here is Tao Tsuchiya, who is definitely more talented than the highly-touted and favored Hirose. While Mugi Kadowaki, Aoi Morikawa, and Mayu Matsuoka are gearing to darker, more challenging characters, Tsuchiya and Hirose are fighting it out for roles abandoned by Haruka Ayase. Mark Schilling at The Japan Times – who is at his usual ‘critical self’ has praised Tsuchiya:

As Tsubasa, Tsuchiya does dewy-eyed, puppy-doggish innocence to perfection, though with 13 screen credits to date, starting with her debut in Kiyoshi Kurosawa’s 2008 “Tokyo Sonata,” she’s hardly a newcomer. She brings an edge to Tsubasa’s pain and a knowingness to her later, tested-by-fire self that speak of real acting, not typical idol-star emoting. [ source ]

How’s that for a lovely commentary!

Both Aozora Yell and Your Lie in April are spiced with musical accompaniment – Suzu Hirose plays the violin while Yamazaki plays the piano in Your Live in April. Tao Tsuchiya (Kento’s perennial love interest) plays trumpet in the school’s prize-winning brass band in Aozora Yell. But the comparison ends there. I don’t want to reveal more, but the ‘tragic’ ingredient for Aozora Yell maybe the girl’s infatuation and then her growing love for the boy (played by Ryoma Takeuchi).

If there is any tragedy, then it should be the third movie on the list – Kyo no Kira-kun (きょうのキラ君) – see the plot above and you’ll know why. I am looking forward to how Nakagawa (remember that Taishi is also the lead in the short movie My Nickname is Butatchi) will play this character – remember the one guy who happens to be the face of Japanese rom-com is Haruma Miura. Can Taishi be the next rom-com prince? By the way, Taishi’s co-star is Marie Iitoyo, who was the lead in the TV series MARS.

And before I end this post, let me just say I was surprised to see how closely Sota Fukushi resembles Taishi in this video – and yes, it’s another rom-com (if I’m not mistaken, featuring Masahiro Higashide and nana Komatsu) entitled  Boku wa Ashita, Kinou no Kimi to Date Suru ( ぼくは明日, 昨日のきみとデートする). Here’s the plot:

Takatoshi Minamiyama (Sota Fukushi) majors in art at an university in Kyoto. On the train to the school, he sees Emi Fukuju (Nana Komatsu) and falls in love with her at first sight. Gathering up all his courage, he speaks to her. They begin to date and enjoy happy days together, but Emi reveals her secret to him. 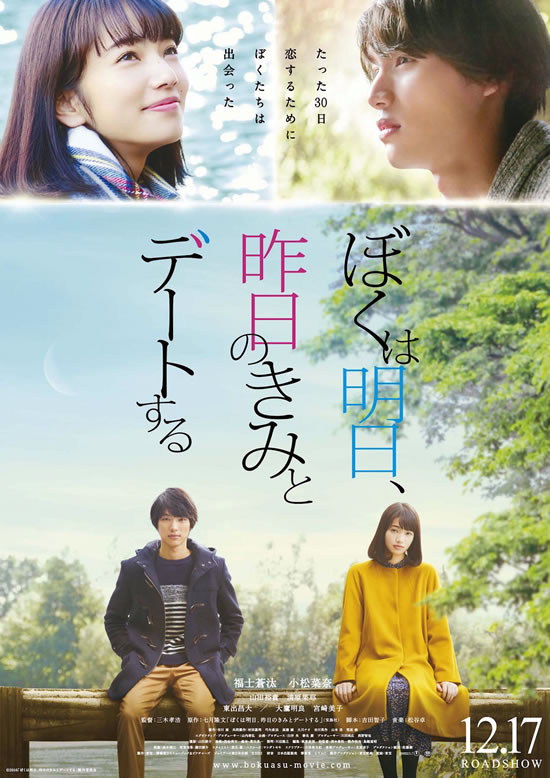 In Part 2, How successful are Japanese rom-com nowadays? Plus, a list of highly-recommended titles from the distant past!