So what makes a good rom-com? In this case, a Japanese romantic comedy. Let’s see…

1. It must be filled with characters we care about, even if we hate some of them;

2. There are minimal plot holes – acceptable even if we question them or have flimsy explanation ( or none at all), but the point is, it shows a certain sincerity and honesty that we can somehow accept or live with;

3. There is a sense of humor – how would you really enjoy a romcom if there is no funny, comedic relief, at least with all the expected scenarios (or plots) including cancer, abortion, bullying, amnesia and the likes?

4. Complemented with memorable, romantic, at least appealing music (yes, soundtrack) not necessarily sugary-sweet, but appropriate for the scene (or scenes). I don’t care if they have Metallica or death metal music but at least it sounded ‘appropriate’ for the scene if you know what I mean…

5. Offers breathtaking (at least picturesque) shots where you expect the leads to have a kiss. It’s not necessary to have a location shoot in Paris (though it might be a good idea) or some other famous romantic locations since there are plenty of nice places in Japan that foreigners have not yet seen or at least, love to explore a bit more ( of course, from the PoV of the locals, places where they have fond memories).

Anyway, here’s a definition that may be acceptable to many:

Romantic comedy films are films with light-hearted, humorous plotlines, centered on romantic ideals such as that true love is able to surmount most obstacles. One dictionary definition is “a funny movie, play, or television program about a love story that ends happily”. Another definition states that its “primary distinguishing feature is a love plot in which two sympathetic and well-matched lovers are united or reconciled”. In a typical romantic comedy the two lovers tend to be young, likable, and apparently meant for each other, yet they are kept apart by some complicating circumstance (e.g., class differences, parental interference; a previous girlfriend or boyfriend) until, surmounting all obstacles, they are finally wed. A wedding-bells, fairy-tale-style happy ending is practically mandatory.

Some may argue with me that a rom-com must have a happy ending to be considered a rom-com, but even the genre has to grow and expand and allow some form of innovation. So, which Japanese movies of recent years are in my top list? Let’s see… 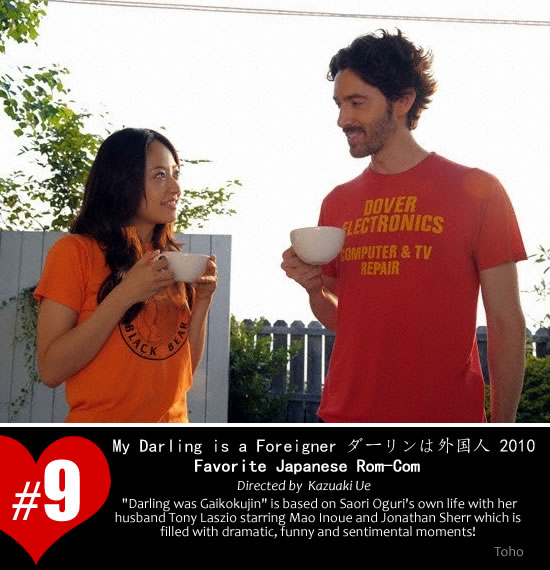 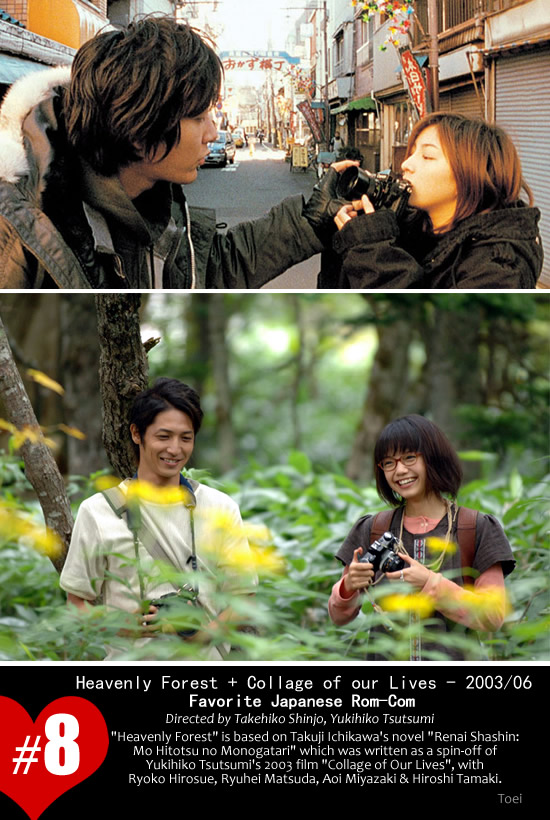 A giant with a gentle heart, a foreigner, and photographers populate the first 3 movies in our top 10 hit list.

One of the two movies with Mao Inoue on the lead role, My Darling is a Foreigner, was a delight the first time I watched it. Review from my favorite critic Maggie Lee @The Hollywood Reporter:

Although the film’s priority target is the Japanese female demographic, cross-cultural liaisons generate interest anywhere in the world. The film provides some insight into how foreigners are perceived in Japan. Sales could trickle into Asian markets that recognize lead actress Mao Inoue for starring in the wildly popular “Boys Over Flowers” TV series and film.  [ source ]

The two “almost” sequel movies – Heavenly Forest and Collage of Our Lives could have ranked higher if not for the story loopholes. Without giving away some of the plots, the movies tackle relationships between artists – in this case, photographers who started as amateurs and have risen to the top of their game while their personal relationships suffer. Aoi Miyazaki and Hiroshi Tamaki (Heavenly Forest) are the more romantic couple while Ryoko Hirosue and Ryuhei Matsuda (Collage) are more of the ‘realistic’ pair, yet the latter’s story is so questionable, I almost walked away from watching and completing the movie.

The forest scene and the oh-so-lovely and huge self-portrait of Aoi Miyazaki at the end of the movie are highlights, while Hirosue’s cup noodles spiced up with mayo is one extremely funny scene that makes up for the movie’s lack of logic. 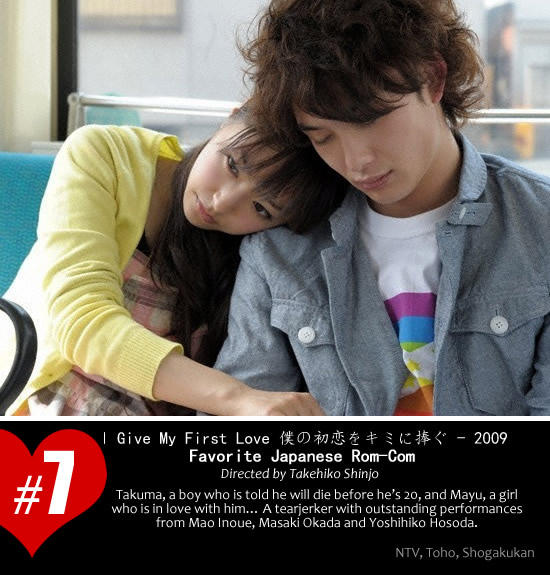 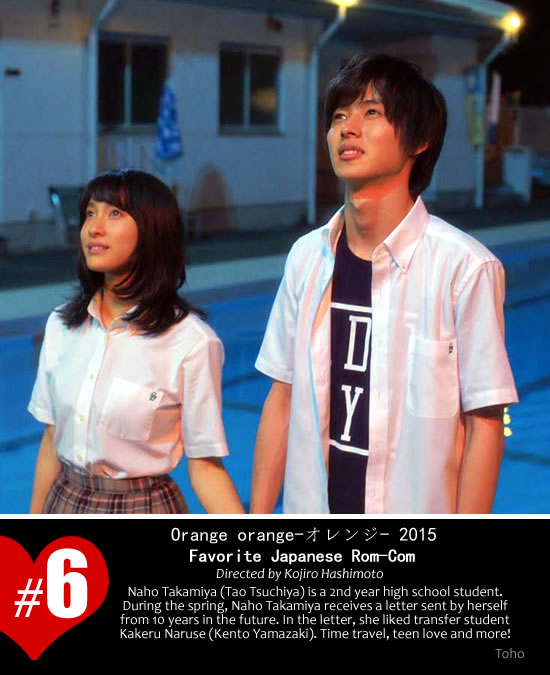 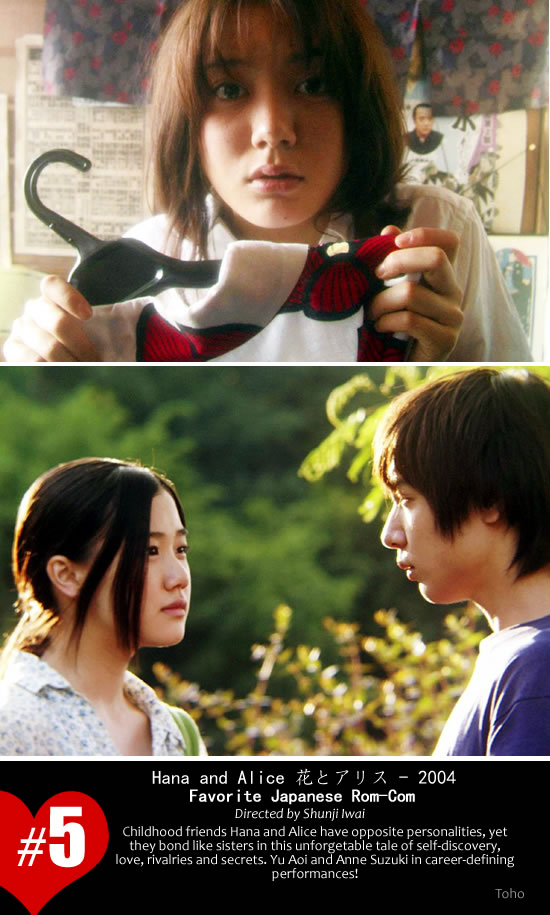 I had a hard time choosing between April Bride (Eita-Nana Eikura) and I Give My First Love to You (Mao Inoue-Masaki Okada) since both movies are about sick individuals who prolonged their lives thru the dedication, loyalty and love of their respective partners. It must be my personal bias of Inoue that made me choose the latter. Anyway, I highly recommend both movies!

Orange, the most recent of all the entries, is credited for offering a new way of looking at time travel. Plus, it leveled up the acting careers of Kento Yamazaki and Tao Tsuchiya with the movies box office success and wins at the Japan Academy Prize. What makes it better than say, Blue Spring Ride (Masahiro Higashide), Forget Me Not (Nijiro Murakami) or Say I Love You (Sota Fukushi)? Well, aside from the novelty of the story, the music, and the supporting cast, it’s the tandem of Tao Tsuchiya and Kento Yamazaki that clicked with me.

Orange, a teen fantasy drama about a high school girl who receives a letter from her future self and falls for a boy she knows is about to die, peeled away from the competition to top the Japanese box office for the Dec. 12-13 weekend. Opening on 303 screens with Toho distributing, the film earned $2.58 million from 262,000 admissions. Starring Tao Tsuchiya, the lead actress in the hit NHK morning drama “Mare,” the film is expected to finish with $15 million. [ source ]

We’re done with cancer (oh not yet…) and heart ailments, so we go for amnesia next. In Hana and Alice, two childhood friends compete for the love and affection of one unsuspecting guy. Predictable right? Yes, but what makes this movie so engaging is Yu Aoi! Her ballet scene is just magical, and over-all she and Anne Suzuki weave their individual magic throughout. 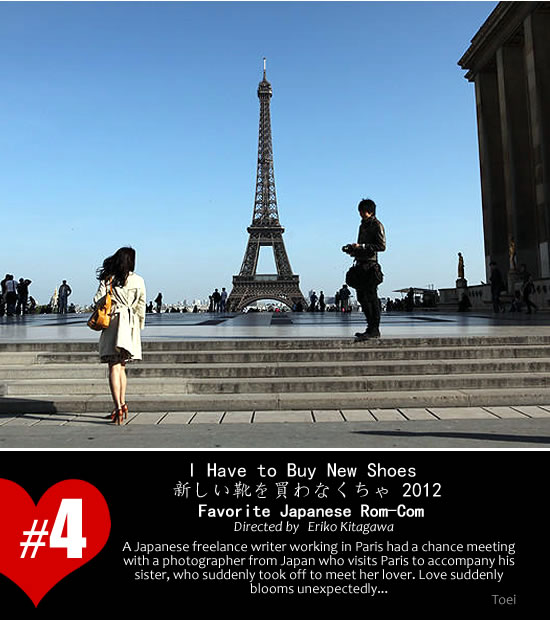 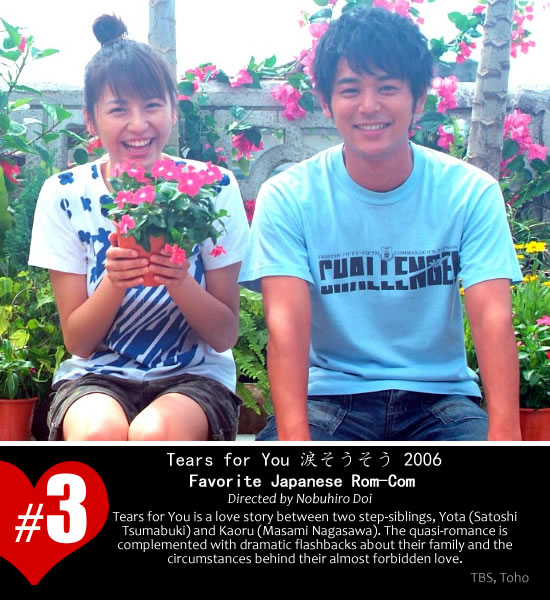 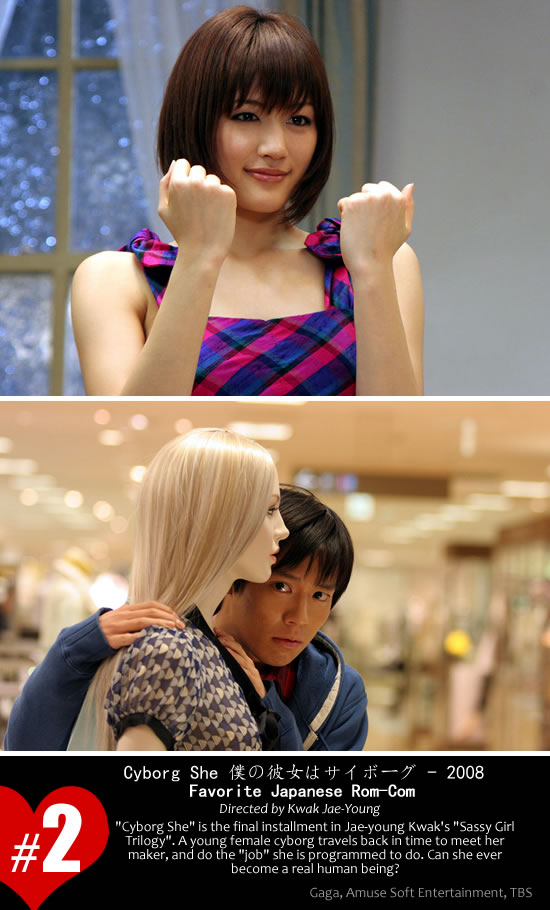 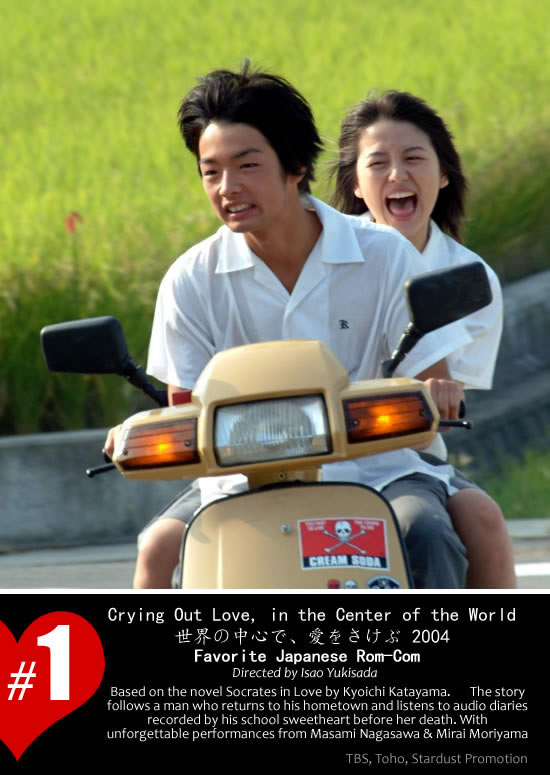 A loyal cyborg who desires to experience human feelings, a pair of half brother and half sister desperately in love, a lost photographer in Paris and finally the movie that made Masami Nagasawa a dramatic actress round up our top 4 Japanese romantic comedies!

Some of you may wonder how come I Have to Buy New Shoes is ranked very high? Aside from the unique ‘look and feel’ of the movie, it’s the romantic atmosphere of Paris that made it a standout. Of course, Miho Nakayama’s allure remains even at the age of 42! I wonder why she remains so radiant and so beautiful! The on-screen chemistry between Nakayama and Osamu Mukai is also credited for the awesomeness of this movie!

The ultimate tearjerkers – Tears for You and Crying Out Love – are not only award winners but huge box office successes. Crying out Love grossed more than $100 million during its run in 2004. But don’t take my word for it, or even Box Office Mojo, watch both at all cost!

The Last Word: Japan Society on Crying Out Loud:

The time is not so long ago, the place is southern Japan. The pace is nice and slow. The boy is Saku. The girl is Aki. The girl is pretty, smart, and athletic. The boy wouldn’t stand a chance in the real world. The kids are in junior high. The kids fall in love. The boy is a lucky bastard and he knows it. The kids hold hands. The kids are cute. The kids kiss. The tension rises. The mood is tumescent. The film is a melodrama. The film is not a pinku eiga. The kids go on summer vacation together. The girl records tapes for the boy to listen to. The boy records tapes too! The idea is cute. Love messages all over. The girl has a big problem though. The girl has a terminal disease. The girl is not having too much fun. The boy wants to take her to Ayer’s Rock in Australia. The place is far. The title makes sense. The girl is probably not going to make it. Or maybe she is. But the blurb is not a spoiler. The audience will cry. The film is the best melodrama of the decade.