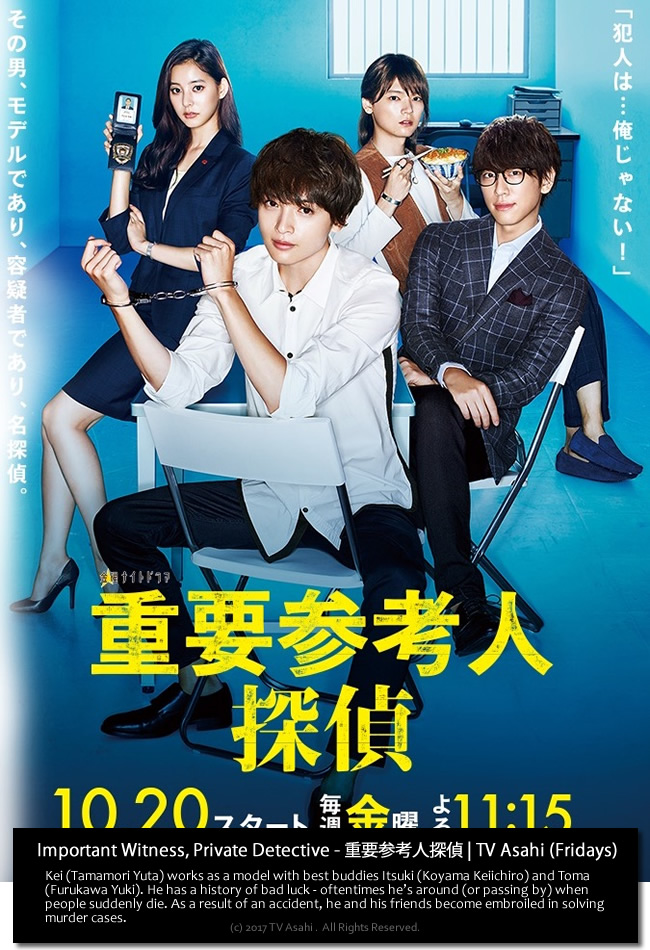 The premise is that he is cursed with the bad luck of being on murder scenes for no apparent reason. Asian investigation/procedural dramas, in my opinion, remain a level below some canned US-based detective shows when it comes to ‘explaining’ criminal phenomenon.

There is this ‘paper-thin’ logic behind certain crimes and I’m not going to change my mind when it comes to this drama. However, the selling point behind Juyo Sankounin Tantei is the personal dynamics of the actors. If shoujo manga targets a predominantly female audience, then this is one of its live-action counterparts.

In 2015, Furukawa Yuki, one of the TV series’ main character caused quite a stir by expressing his frank opinion about Japanese shows, and mentioned that:

Japanese audiences watch dramas because they want to see the people in it, and because they like the manga or anime they’re often based on, not because of the quality of the story,” said Furukawa, talking to The Hollywood Reporter after making a presentation in English on the opening day of the TIFFCOM content market at Tokyo International Film Festival. It’s fun for audiences to get to see musicians they like, even though many of them can’t act. It’s different to dramas in the America, where people actually train to be an actor,” added Furukawa, who studied method acting in the U.S., having been to high school in New York after his family moved to Canada when he was a child. [source]

Not that he directly criticized Tamamori, but the comment was not well received by fans. For the record, his comments are true. It’s one thing to perform a dance-song routine on stage, and it’s certainly another to portray a character in a TV series, or even a full-length film.

Lest I forget that Tamamori headlines this drama, I’d say that I’m not surprised he can handle the lead. In this age of self-conscious promotion among millennials, Tamamori is a perfect model – handsome, oozing with sex appeal, properly trained in the arts, and knows how to please an audience. It’s not hard to believe that he’s a model, what is a bit of a stretch is on the ‘investigative side’. For someone very attractive and possessing a personality of a modern version of the Hardy Boys may not appeal too much to some. But who am I kidding? Fans will continue watching the show anyway. As Furukawa said, it’s not the acting that matters, but the stars.

Apparently, I need to hone my doramawatch skills as I missed a few hits in my Top 10 most anticipated Japanese drama of Fall 2017. I’ll let the photos do the talkin’

But, let me summarize a bit for you: There are, at least, 25 Tv series available for our viewing pleasure, and the prevailing themes this season are school drama, detective/investigative, medical, and romance. Personal-biased stars Yamazaki Kento, Kamiki Ryunosuke, Furukawa Yuki, Yoshizawa Ryo, Mitsushima Hikari, Inoue Mao, and Ayase Haruka are heavily involved in these doramas. Veteran and award-winning actors Asano Tadanobu and Yakusho Koji also headline these series. Noted Johnny’s are Sakurai Sho and Tamamori Yuta.

Episode One introduces us to the BFFs – Tamamori is Kei. His two buddies are Itsuki (Koyama Keiichiro) and Toma (Furukawa Yuki). An attractive woman, who is a bit on the matured side, tries her luck seducing Kei. Attending a function that showcases expensive items – including an old-fashioned watch – converts to a murder scene when the said woman dies. The heavy-laden chandeliers on top crash on her head. It was instantaneous death, and being beside her, Kei is accused of being the prime suspect. [A homely looking female staff pointed her finger at the unsuspecting Kei!]

Things get further complicated when our model-sleuth found the watch in his possession. Like a thief caught in the act, he has no choice but to run.

Is he a criminal? Is there any sort of logical explanation for the murder and the theft?

The scene after the murder is a bit hilarious. After an elaborated ‘chase’, Kei returns to explain what he thought had happened. A person (of interest) was caught on CCTV carrying a heavy bag – this serves as an impetus to an explanation that he was set-up. I’m not going to get into further details and suffice to say, he identified the real criminal and cleared his name.

For entertainment value, Episode 1, is a nice start. Plenty of scratching of the head sort of scenes and dialogue, but what can be fascinating are the personal histories of the three leads, and perhaps an account of why Tamamori’s character is ‘gifted’ with such bad luck.

Furukawa is the most gregarious among the three, showing his abs to screaming fans. If that is meant as a tease, then he has already succeeded.

I’d probably post a full drama review later when the last episode is shown. At the moment, my curiosity to watch Furukawa and Tamamori together compelled me to see this show.

Not to be treated as a serious detective/investigative drama like Detective Yugami (where I’m writing an episodic review), Juyo Sankounin Tantei is a perfect respite after watching something as heavy as Inoue Mao’s school-mystery drama Ashita no Yakusoku (Tomorrow’s Promise).