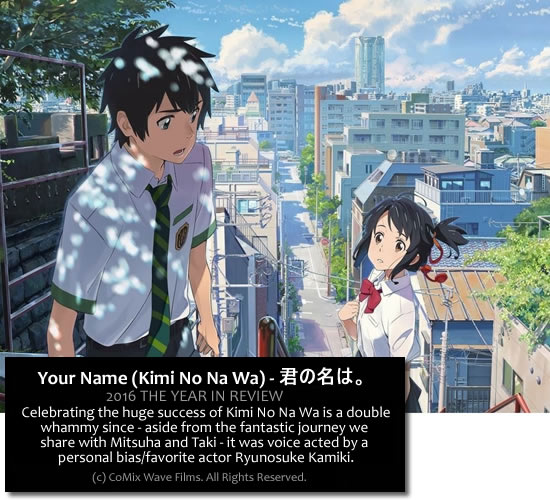 Forty-six million dollars (more or less) separate Miyazaki’s ‘Spirited Away’ from Makoto Shinkai’s ‘Your Name’ in terms of box office receipts, and it’s just a matter of time the position may change. Of course, that remains to be seen.

The latest results from China is impressive – $4.4 million in pre-sales tickets and a grand opening in 7,000 theaters to boot! While Shinkai insisted that Miyazaki and Studio Ghibli are his inspiration, there is no denying that we have a new animation hero in ‘his name.’

This bright spot in the anime world shines even brighter with quality and exciting anime series – Re: LIFE, Ajin: Demi-Human, Orange, March Comes In Like a Lion, Natsume Yuujinchou Go, Yuri on Ice, Bungou Stray Dogs; Fune Wo Amu; and Drifters among others.

There was extensive discussion about having a ‘golden age in anime’ but many are not in agreement with the use of the term ‘golden age’. An alternative description ‘awakening’ appears to be a better word. However, this only applies to describe how people from the West feels about animation. In Asia, it might be different. I think it depends on timing – how anime were released (in your area) and when you watched it. With so many ways to get a hold of anime right now, people cannot celebrate a ‘golden’ anime together as much as they like to. But with the success of Your Name, the level of awareness is as high as in anytime and that is a good thing.

Shinkai’s film, for me, is the culmination of his work and I look forward to his future projects, in as much as I did when Garden of Words was creating a buzz in 2013. Celebrating the huge success of Kimi No Na Wa is a double whammy since – aside from the fantastic journey we share with Mitsuha and Taki – it was voice acted by a personal bias/favorite actor Ryunosuke Kamiki, and the captivating Mone Kamishiraishi.

Although the hit status is new for Mr. Shinkai, the themes in “Your Name” are not. Since his first film, “Voices of a Distant Star” (2002) — which he made almost entirely by himself on a computer — Mr. Shinkai has explored how young men and women do and do not connect. Text messages disappear, cellphone calls don’t go through, and characters only just miss meeting on trains. “Shinkai is a master at depicting and investigating the distance between people,” Jonathan Clements, the author of “Anime: A History,” wrote in an email. He added, “He excels at allegorizing the way that human beings are separated by gulfs of yearning.” [ source ]

As many people are becoming more aware of Kamiki, the glaring fact that most actors in Japan are still being badly managed also come to mind. But that’s a different topic to talk about, we did a three-part report on that already and may need further more writing in the future.