Before I list our best and worst casting choices, let me mention some issues related to the cast of Japanese live-action movies of late.

There were a lot of discussions related to the actors chosen for the Ghost in the Shell movie, and just a few months ago, a writer at Fusion, Charles Pulliam-Moore, was happy to note that the actors for Fullmetal Alchemist will have ‘no white people’ and called it a ‘beautiful thing.’

I don’t know if Mr. Moore knows Ryosuke Yamada and the supporting cast, but he certainly made a lot of sense, he wrote:

The world depicted in Fullmetal Alchemist is a complicated one. There, steam-powered technology and alchemy are the major forces that power the world. Amestris, the country where the bulk of the series takes place, is obviously fictional, but it’s heavily inspired by Edwardian-era Great Britain and German culture. Edward (subtle), Fullmetal Alchemist‘s flaxen-haired protagonist, works as a State Alchemist tasked with traveling through Amestris to investigate various alchemy-related disturbances of the peace. As the series progresses, it becomes increasingly clear that Amestris is more or less a stand-in for Europe. [ source ]

He also mentioned that the filmmaker for FMA “wants to depict something that follows the original work as much as possible.” 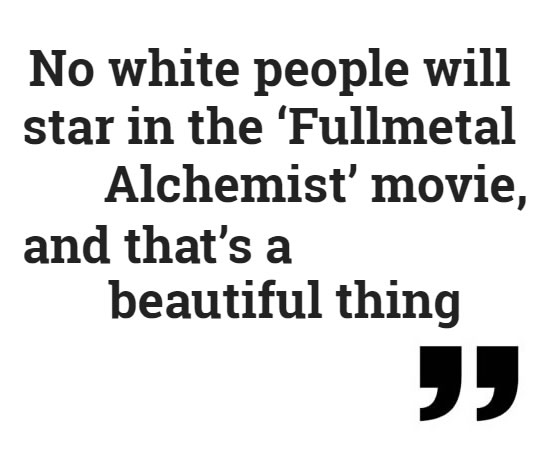 Looking back it seems that there was a bigger issue at hand and that Japanese animators are “being influenced by Disney” and that made them draw “characters with large, round eyes and brightly colored hair.” Suffice to say that it’s only proper to cast white people since these are “white” characters.

However, another writer Julian Abagond, argues that 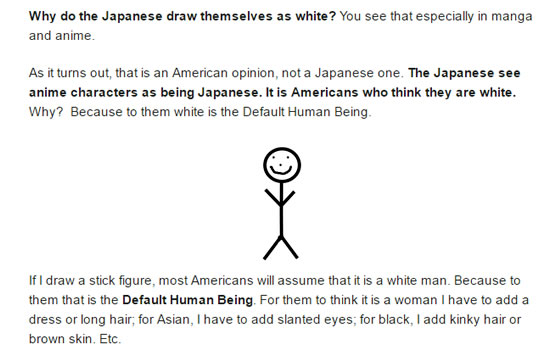 That argument kept me thinking for a long time.

Being non-Japanese and a non-white allow me a different perspective. While I am familiar with the “large eyes, blond hair” ideal in anime, I see them as Japanese (though they may look Western)  because they speak Japanese. I also believe that watching Japanese anime is best when you read the English translation below or better yet, you learn Japanese. I don’t want to watch my anime with English dub; it just doesn’t sound right.

Perhaps others have watched most anime with English dubs, so it makes sense to me if they see these characters as “white” and being “Western.”

I think there is arrogance to that assumption. 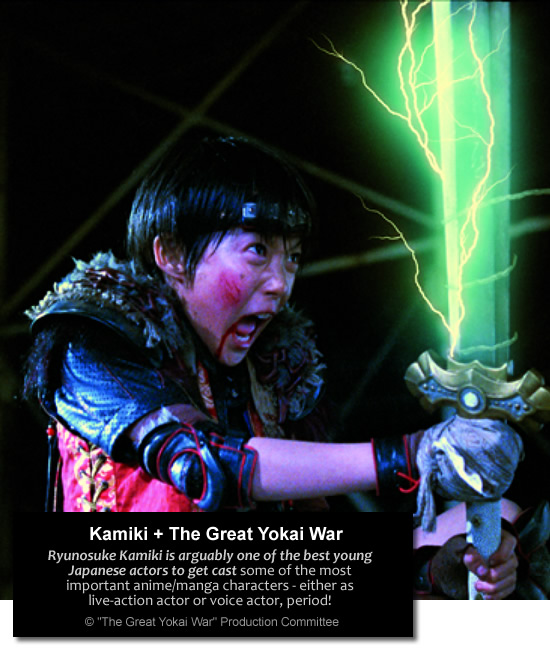 Coming up is our list of the best and worst casting in Japanese live-action!

I don’t know if you can give me a valid argument if I say #RyunosukeKamiki is one of best Japanese actors to be cast in live-action films!

How can they be seen as “Western” when these anime characters follow Japanese culture and tradition? Some of them wear Japanese school uniforms, right? Many of the anime characters like Houtarou Oreki and Eru Chitanda (Hyoka) or Takashi Natsume (Natsume Yuujinchou) or Mirai Kuriyama and Akihito Kanbara (Beyond the Boundary) are Japanese high school students!

They have bento for lunch;

They go to temples to pray;

Are American, British, Australian or South African students do these things? Maybe they do have bento for lunch or are Buddhist, but really?!?!?

Above are two clips showing how good an actress Rinko Kikuchi is. I don’t know anything about marketing a film, but when this article analyzed why Pacific Rim did not make great box office success, it – somehow – failed to mention that some people may not want to see an Asian woman with a lot of guts and can be as powerful as her white male counterpart.

Above dramatic acting is what happens when you cast a talented Japanese actress!

I don’t know if Kikuchi has approached the producers of Ghost in the Shell as she did with the filmmaker of Pacific Rim. If so, then they turned her down – what a pity, no what a tragedy!

Finally, I also believe that because English is the universal language and that America is the ‘most powerful nation on Earth’ it entitled some people to assume that Japanese anime and their live-action adaptations will follow their ‘human being’ default.

After all, the world revolves around them right? Wrong.

[That ‘most powerful nation on Earth’ mention will be frowned upon by Russians, Chinese, and some others I think. ]