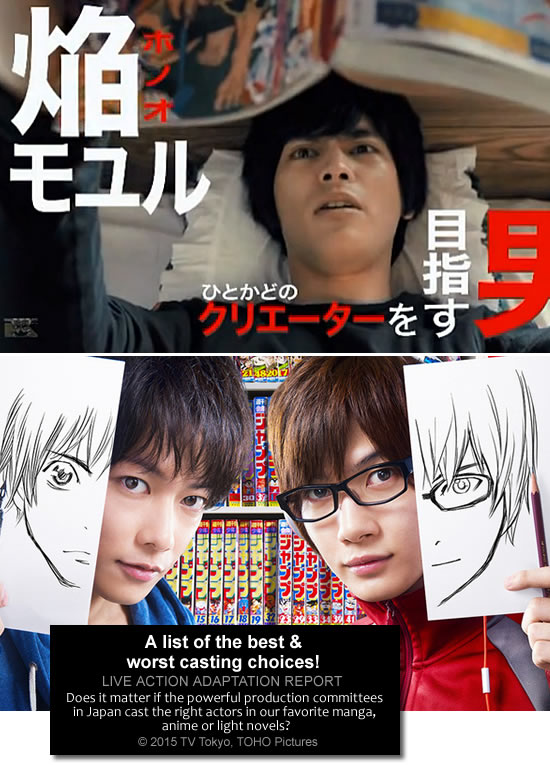 Does it matter if the powerful production committees in Japan cast the right actors in our favorite manga, anime or light novels? The question appears either valid or invalid to fans since no one could do anything about it anyway, but still – what have we got to lose?

It is equally relevant to say that – some of us – can also make accurate ‘predictions’ as in the case of Kento Yamazaki and Ryunosuke Kamiki grabbing some noted roles of late. I say it’s delightful since it only means ‘we get it!’ And the people in these committees do too! Though I question their choices most of the time. The fact remains that the members of these committees and not artists or filmmakers, but are businessman and they are tasked to make sure that the funds put into these films will earn them a reasonable ROI (return on investment).

Let me get back to that later.

A Casual look in Casting History

Back in 2005, Death Note fans wondered if Tatsuya Fujiwara and Kenichi Matsuyama could play the roles of Light Yagami and L with honesty and authenticity. When it aired, fans were happy with Matsuyama’s performance but not with Fujiwara. The theater-trained actor even said that he find playing Yagami as “difficult” since it’s a “character with such restrained emotions.” It is of equal interest to note that Kenichi Matsuyama went on to play Soichiro Negishi in Detroit Metal City, a live-action adaptation that showcases Matsuyama’s comedic talents.

It was the opposite when Shota Matsuda and Erika Toda took on the main leads in Liar Game. Toda was happy to note of getting the second season way back then:

‘Season 1′ was the first Saturday drama. The staff and I were tense and made a lot of mistakes. I still remember how nervous I was. Even now there are a lot of firsts, from the lightning to the cuts. Many things have never been done in a drama before. That kind of originality was a lot of fun. I guess that everyone enjoyed watching something more original. Such individual characters and such a complex yet fascinating psychological warfare were something new for drama. This time we moved to the 9 pm timeslot on Tuesdays, and I was anxious about how this is going to affect the style and story of what used to be a Saturday drama. [ source ]

Perhaps one of the most successful castings is the Hana Yori Dango series with Mao Inoue, Jun Matsumoto, Shun Oguri and Shota Matsuda, among the lead stars. Inoue went on to win acting awards for playing Makino Tsukushi, and the manga/drama went on with various adaptations in South Korea, Taiwan, mainland China, and India.

Also worthy of mention is the casting of Joe Odagiri as the bugmaster in the 2006 live-action Mushishi and Ninomiya Kazunari in The Blue Light.

Mika Nakashima and Aoi Miyazaki nailed their characters in Nana, an acting collaboration that is as good as it gets. Eita and Ryuhei Matsuda match this partnership to a different level when they star in “Mahoro Ekimae Tada Benriken” by Shion Miura.

When Warner Bros. announced the production of a live-action movie for Rurouni Kenshin, fans and moviegoers were ecstatic to learn that Takeru Satoh will play the legendary assassin,  Hitokiri Battōsai. The film spawned two sequels, with some of Japan’s best talents joining the cast.

The same applied when the lead actors for Bakuman became known. Again with Satoh in the lead (as Moritaka Mashiro), and Ryunosuke Kamiki playing his mangaka companion and teammate  Akito Takagi. The additional casting of Shota Sometani added another layer of excitement, reuniting Someya with Kamiki (after the TV drama Kokoro no Ito).

The lesser-known Minoru Furuya’s manga “Himizu” adapted for the big screen by Sion Sono paved the way for Sometani and Fumi Nikaido to win the prestigious Marcello Mastroianni Award for Best New Young Actor or Actress at the Venice Film Festival in 2011.

When the Death Note franchise resumed production in 2015, many were surprised that Kento Yamazaki was cast to play L in its drama version. A Japanese blogger even commented that Yamazaki lacked the “flair” for playing the tough character. Well, she can be as biased as we are, because she said Masataka Kubota was great when in fact, Kubota started ‘great’ then went on to do a lot of overacting himself. I don’t understand the need to roll the eyes ever so often! The saliva dripping down his mouth is fine but can the show director demonstrate a particular ‘know-how’ by putting subtleness into an otherwise colorful, loud character? Even so, the role made waves for Yamazaki, and the young actor is currently one of the most in-demand in Japan, competing with Masaki Suda.

On the same year, Yuya Yagira, Koji Seto, and Amane Okayama play the leads in the live-action adaptation of the manga series “Gasso” by Hinako Sugiura. Okayama went on to play a supporting role in Litchi Hikari Club, featuring Yuki Furukawa in the lead.

Recently, a lot of fans complained about the casting of Daytime Shooting Star. Since Kentaro Sakaguchi was the model of one of the characters, isn’t it just logical to have him play the role in the live-action? That role went to Aran Shirahama. The same can be said when Sota Fukushi was cast to play the lead in BLEACH and Ryosuke Yamada in Fullmetal Alchemist.

How can fans insist that #KentaroSakaguchi is #DaikiMamura in #HirunakaNoRyuusei The casting is a done deal but it’s still Bull$hit to me! pic.twitter.com/800Ik1Bhcl

There are also some who complained about Kento Yamazaki getting a lot of roles, but I think if you’re going to complain, you have to justify it by citing some reasonable explanation. I would have bothered to respond to these complaints if I see any feasibility in doing so. But the sad fact remains, these are trolls having some issues with something.

I also don’t think Kento Yamazaki is a pretty face. There are plenty of good-looking guys in Japan. Why is it that Yamazaki gets these roles? One simple fact: He knows how to act and he look the part. Being fairly good-looking is the least of his qualities. I can understand if some people can’t get it, I also can’t get it that Sota Fukushi is able to land lead roles. One big difference between them – Sota is a #deasfisheyes and his agency and fans can talk for decades and I will not believe them for a second.