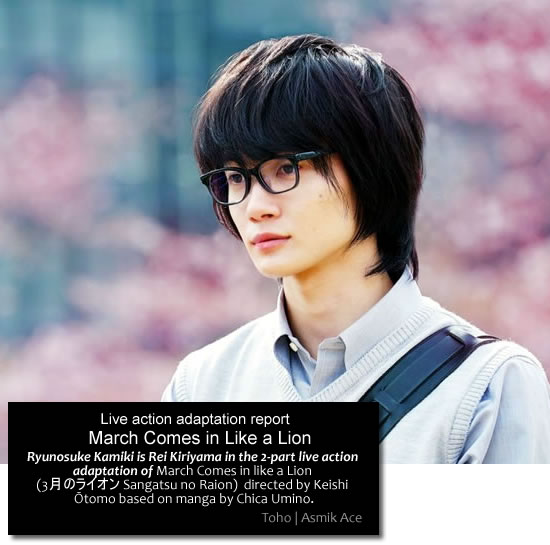 March Comes in like a Lion (3月のライオン San gatsu no Lion) is an upcoming two-part Japanese film directed by Keishi Ōtomo, starring Ryunosuke Kamiki and based on the manga series of the same name written and illustrated by Chica Umino.

The film will be released in Japan by Toho and Asmik Ace in 2017 in two parts, with the first part scheduled for March 18 and the second planned for April 22.

Rei Kiriyama is a 17-year-old boy who recently started living alone, financed by his salary as a professional Shogi player. Despite his independence, however, he’s yet to mature emotionally, and his problems continue to haunt him in his daily life. His relationship with his adoptive family is strained, and he has difficulties interacting with his fellow high school students. Meanwhile, his professional career has entered a slump. Burdened with the heavy expectations placed on him as the fifth to become pro in middle school, his wins and losses are fluctuating as his record and progression into the ranks begin to stagnate. Acquainted with Rei are the three Kawamoto sisters: Akari, Hinata, and Momo. Unlike Rei, they live happily in their modest home, which they warmly welcome Rei into as if he were one of their own. Despite his reservations about becoming too close to the family, he frequently visits, interacting with them and receiving the kind of care and affection he never quite had while under his foster home. This is the story of Rei’s triumphs and failures, relationships new and old, and his growth as a person. [ source ]

I’m still getting used to the anime – even though there are already four episodes as of this writing. But what appeals across is the sadness of the main character – Rei Kiriyama.

There is, perhaps this notion that being sad or depressed means that the person will never be able to smile or laugh. I think that people have different ways of handling depression or sadness. To assume that someone who is always animated, excited, and laughs out loud as being happy, is pre-judging. The same goes to someone who does the same but is depressed.

I need a break from the loneliness that is totally consuming me.

That’s what I get from watching the anime. I don’t know if it’s the right anime for me to watch and review but I want to witness how Rei Kiriyama is going to handle the sense of loss of his family. His relationship with his mentor who took care of him after the tragedy and the sisters who he interacts on a regular basis. I need to know what sort of power they have to heal him and eventually make him a better person.

While some people may have observed the happy side and the sad aspect of each episode, I think that loneliness will remain pervasive in Rei’s world.

I also felt that this is an acting vehicle for Ryunosuke Kamiki. This is the type of role that someone like him – who is used to play high school student – has in mind. The challenge is quite evident. Playing Kiriyama is the transition role that he needs to nail to be at par with some of Japan’s more accomplished actors – that is, regarding variety and complexity of the roles they played. The Kamiki of yesteryears – Little DJ, The Great Youkai War, Into the Far Away Sky – is gone and he has matured to come up with something like Junichi Naruse in WOWOW’s Henshin. He is also one of the few actors who do voices and is very successful at that.

Rei Kiriyama – 17 years old. The protagonist of the series. A five dan, Rei became a professional shougi player while in middle school. His parents and sister died in a traffic accident, and after that, he was taken care of by his father’s friend Kouda and became his apprentice in shougi. After becoming a professional shougi player and after completing middle school, he became independent of him and decided not to attend high school. After feeling a “need” to attend school, however, Rei later joined a high school after a one-year delay. He lives in the city of Rokugatsu-chou (June town). [ source ]

The 2nd youtube video is the latest teaser trailer for the live-action movie.

Asianwiki has more details on the live-action movies.

Of special interest on the launch of the anime:

Here’s a summary of the story behind the new cafe:

To mark the start of an animated TV series adaptation, a “March Comes in Like a Lion”-themed official cafe has opened in Tokyo’s Marunouchi district. It is located at Marunouchi Reading Style Cafe on the fourth floor of the KITTE Marunouchi complex. The new anime series premiered on Japan Broadcasting Corp. (NHK)’s General channel on Oct. 8, the day before the cafe opened. It is based on Chika Umino’s “shogi” (Japanese chess)-themed manga of the same name. The official cafe, which is open until Dec. 30, serves food items in collaboration with the anime and sells commemorative goods. It also has a spot for fans to take pictures with life-size panels of characters and a small gallery space with memorable scenes from the anime. [ read more ]

On 9th October, @TiaHeim and I went to the Sangatsu no Lion café! Everything was so cute and loveable! #nagiinjapan #sangatsunolion #japan pic.twitter.com/e23Kwh7pji

Above tweet shows some photos of the cafe itself. It looks so elegant and cozy! I’d love to have a coffee there myself.

Wave Motion Cannon is doing a weekly motion cannon featuring the anime! Worth checking their updates.