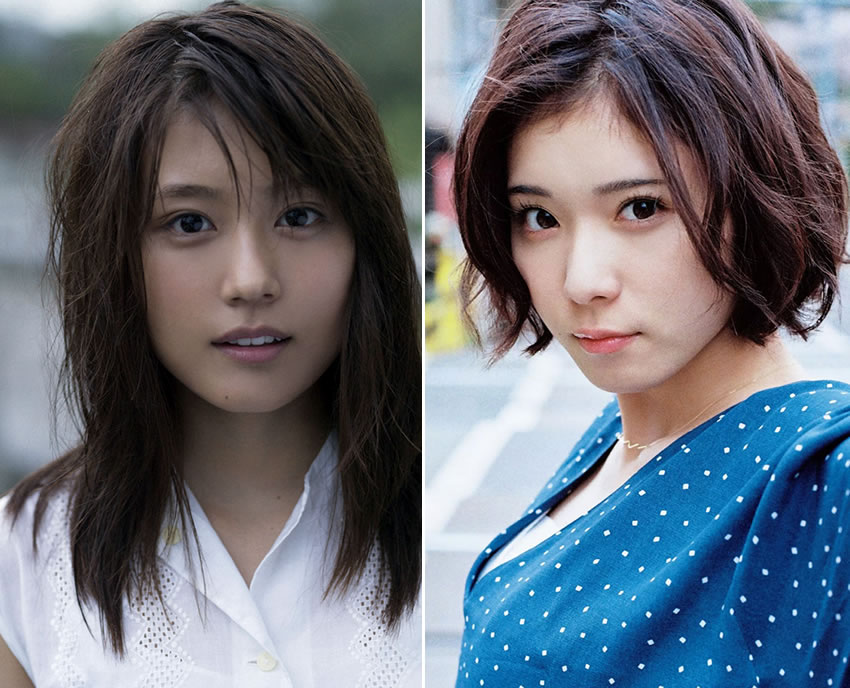 Maybe you’re wondering why pair Matsuoka with Arimura? Let’s see. Among Matsuoka Mayu’s many talents, it’s always her voice that draws attention and she seems to have almost perfected using it to differentiate her many movie and drama characters. On the other hand, Arimura Kasumi’s ticket to some prestigious casting opportunities is her ability to look ordinary. Maybe the term ‘miscast’ applies to her too!

If you’re to tell me that Matsuoka Mayu is not an acting genius, then I have to disagree with you. Did you cheer Hashimoto Ai’s Kasumi in The Kirishima Thing when she slapped Matsuoka’s Sana? It would not have been quite a scene if a less talented actress played Matsuoka’s role. You see, in order for the audience to have that gleeful reaction is for Matsuoka to make her character as annoying as possible and be a bitch. In similar fashion, who would not enjoy Matsuoka as Shinobu in the 3-part Chihayafuru live action? As the karuta queen, she’s formidable and intimidating. Acting-wise, Suzu Hirose is a cat and Matsuoka is a tigress!

In a character reversal, it’s Matsuoka who made her Aquarium Girl character so naive (maybe even stupid) yet the audience can’t help it if they cheer her on the dolphin show. There’s also plenty of gushy romantic undertones in the Matsuoka-Sakaguchi Kentaro tandem in Kounodori, and luckily there’s a second season for that! But considering all her characters, it’s always Chika from Mondai no Aru Restaurant who registers the strongest impression.

Now comes Katte ni Furuetero. Is this her next most important role? Watch the trailer below and be the judge!

I have not seen Watanabe Daichi before but he looks ‘capable’ at least from the trailer. Kitamura Takumi is already ‘on the verge’ so no issues with him. But Matsuoka remains at the front and center of this new film and she showed that she’s capable of playing a complex character.

While some may point out that Matsuoka has yet to get any acting nominations, Arimura already distinguishes herself in Flying Colors – ビリギャル as she went on to grab a Best Actress nomination at the Japan Academy.

But here’s the rub – Kudo Sayaka (Arimura) became the impressionable character that she is because she looked different (i.e. less ordinary) since Arimura has always been consistent as being the same all the time.

As with Matsuoka, Arimura also has another exciting project up her sleeves. Who would not be excited about the new movie Narratage – ナラタージュ? Yukisada Isao directs the film. Matsumoto Jun is Arimura’s love interest. You also get to watch Sakaguchi Kentaro as one of the main cast!

The trailer below also indicates the ‘fearless move’ of Arimura as she gets intimate with Matsumoto’s character Takashi. Admittedly, that’s a great move for Arimura to hone her craft. If Kadowaki Mugi and Nikaido Fumi can reveal themselves bare (even naked) in their movies’ crucial scene, then Arimura must do that too!

Look closely and watch it again. Did Arimura manage to use her eyes to act? If your reply is negative, then that’s what is notoriously known as #deadfisheyes! Still, I find Arimura to be a better alternative to Gouriki Ayame, who is arguably one of Japan’s worst actresses. Hamsapsukebe points out what may be obvious…

I can’t believe the Oscar Promotion duo of Gouriki Ayame and Takei Emi keep getting push after push after push with doramas written for their lack of talent. Does whoever run Oscar Promotion have pictures of tv executives with schoolgirls? (very possible) Do they give the greatest bj in the world at the same time? Do they have some sort of acting talent and screen presence that I am absolutely blind towards? [read more]

For long-time observers of Japanese acting styles, it’s a given that locals ‘appreciate’ overacting especially in comedic moments and that dramatic, tragic scenes are the true test of box office appeal, but even some of them have observed how Arimura has those incredibly blank stares when emotions were required. It’s a pity how boring Nanimono became for lack of chemistry between Satoh Takeru and one of Japan’s ‘favored’ aspiring actresses. Even Suda Masaki and Nikaido Fumi could not save that film.

So to answer our opening question, we’ve just laid down the specifics on why and how Matsuoka Mayu represents the good side of Japanese casting, while Arimura represents its mediocrity.