Moriyamachu Driving School is the live-action adaptation of a seinen manga written by Shinzo Keigo, directed by Toyoshima Keisuke, and starring Kaku Kento and Nomura Shuhei.

It tells the story of an unlikely friendship between two former high school classmates who met during one summer in an unusual accident. While most of the movie centers on the kids learning how to drive, the personal circumstances of each pave the way for a more serious look at their coming of age.

Sato Kiyotaka (Nomura Shuhei) is a sociable, almost goofy yet good-natured kid who spends time with his cutesy “almost girlfriend”, Chieko (played by the charming Yukino Kishii). One day, he announces his intention to secure a driving license and gain the freedom to travel anywhere in Japan with her.

During one of Todoroki’s driving duties, he hit Kiyotaka rendering him unconscious. This accident presents a predicament to the unlicensed driver and his mafia boss. Fortunately, Kiyotaka recovers without the slightest of physical injuries. He is taken to an unauthorized driving school, and instead of hush money, will take driving lessons for free with Todoroki.

I remember reading Gakuranman’s Driving in Japan: Passing the Japanese Driver’s Test and I can appreciate what the author has to go through. He spent a considerable time in Japan and wrote and explained why not enrolling in an actual driving school saved him a lot of money. This movie may not have foreigners in mind but it also depicts how “typical” outsiders are seen by the locals in light of these foreigners enrolling in driving schools. 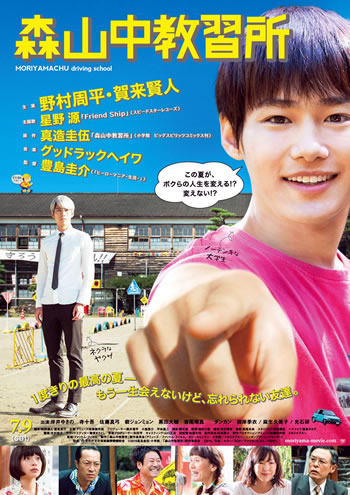 I also have to qualify the “friendship” between our two main characters. It is not as much as how their friendship blooms but rather how each individual realizes the limits they put on themselves and in doing so, they expand relationships they thought could never get deeper and more meaningful. Kiyotaka’s familial environment is tense, yet it was not made overly dramatic thus the viewers only realize the degree of his discontent towards the end of the movie.

The same can be said of Todoroki, as he sees people being “better” than he first considers them to be. This sense of “betterment” is somehow the result of his interaction with Kiyotaka and so he becomes more open to his buddy and even began to contemplate his future as part of the yakuza.

Both Nomura and Kaku were excellent, with Nomura making his presence felt at every stage. His falling for the older driving school teacher, Saki (Aso Kumiko) is both funny and endearing while his relationship with Chieko is so natural and refreshing. He has perfected the young-boy-in-transition role already while also incorporating a certain uniqueness to each of these characters. I enjoyed The Summer of Whales that put Nomura on the potential top tier acting mark, and this coming of age follow-up confirms what I knew all along.

Director Toyoshima Keisuke is the same guy who did the xxxHolic TV series for WOWOW starring Sometani Shota and the youth-sports movie Softboys (with Nagayama Kento and Kaku). His approach to directing his actors and adapting his source material is unconventional, making his movies more than just the adaptation of someone else’s vision. He has his own quirky way in telling his stories, and that makes him a filmmaker to watch.