The older Kengo recently lost his mom while his dad is confined in a nearby hospital. He is an accomplished kendōka (剣道家) who has won numerous medals under the tutelage of his dad. However, he has stopped competing and now works as a security guard. He’s also a heavy drinker who fools around with a girl and seems to have little regard for his well-being.

Tooru is a high school student who enjoys rap music, hangs out with his friends, but oftentimes is haunted by his near-death experience of drowning. On his way from school, he was bullied by kendo players but a monk, who happens to be a kendo teacher himself intervened. Complimenting on his posture, the monk encouraged Tooru to join and embrace martial arts. While having second thoughts, the young man soon warms up to the idea.

An encounter between the two sets events in motion, forcing each of them to face their inner demons.

Director Kazuyoshi has a reputation for using ultra-violent scenes. His 1997 debut film Kichiku, received an R-rating from Japan’s film board and has shocked film fest audience. He is also well-regarded for his serious take on individuals’ emotional struggles. But he wants to be known as a filmmaker who will continue to surprise (even shock and alienate) film audience.

I’m not interested in being pigeon-holed into any particular genre. I’m more interested in seeing something that people haven’t seen before. But it may be true of all of my films that about half of the audience is probably confused by them. [source]


After watching Antenna, My Man (Best Film at the 36th Moscow International Film Festival), The End of Summer and Blazing Famiglia, the director has come up with yet another different film. Here, he employs music and moods, light and shade, even the forces of nature to offer audiences with something fresh. Not that martial arts and familial relationship are not inter-connected by other filmmakers in previous movies…

Like My Man – which gave Nikaido Fumi her first Best Actress nom at the Japan Academy Prize – Mukoku is heavily invested in the main actors’ performances. Note that the movie is a drama, and the intense physical confrontation between Ayano and Murakami in different settings and circumstances heightened it even further. 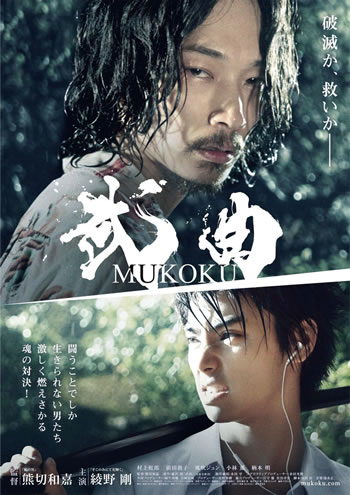 I agree with the collective observation that Ayano Go is an improved actor, but I’m more impressed with Murakami Nijiro. Of course, the young actor belongs to a family of artists himself, but as the persistent and angry Tooru, he embodies the frustration and helplessness of his character with integrity and truth. The hesitation and self-conscious gestures in previous films are gone. What we have here is an actor in total control of his character. Mukoku is as much Murakami’s breakthrough film as Himizu is Sometani Shota’s or Tomogui is Suda Masaki’s.

Veteran actor Kobayashi Kaoru who plays Ayano’s domineering father may have limited screen time but his presence is felt throughout the film. It was Kengo’s dad who trained him kendo after all.

Mukoku is also about the sport and how uniquely Japanese it is. With more than 1.66 million practitioners in Japan alone and a global total of 6 million, kendo is a well-regarded sport that aims to harness not only man’s physical prowess but also in uplifting the spirit and promoting respect for other human beings.

While there is little resemblance or even ‘inspiration’ taken from any Hollywood martial arts films, Mukoku is ‘in-your-face’, dark, tragic and yet positive at the same time. There is no gloss over the fact that people can be malicious and spiteful, and can say the most stupid or hurtful things even to their loved ones – there are no heroes here nor villains – which makes the movie noteworthy.