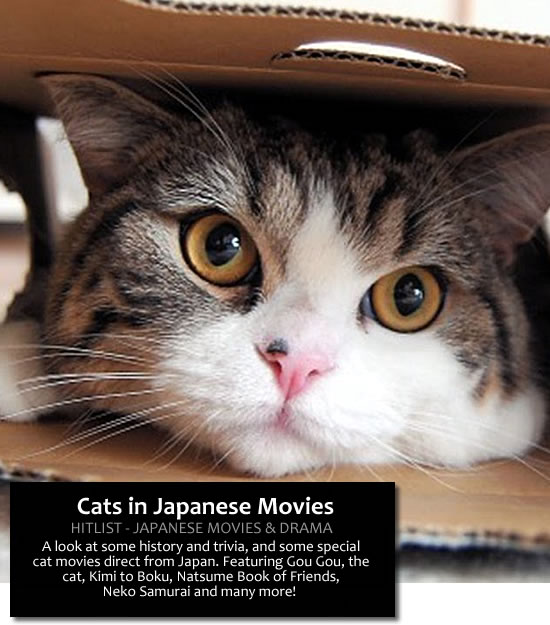 Cats appear – more often in Japanese movies – as constant, loveable companions or a symbol of luck and good harmony or both. While dogs [we’ll talk about them in Part 2] are considered more popular (a poll shows dogs are preferred by 49.8% versus 27.9% for the feline creatures), the Japanese is reputed to be one of the most passionate cat lovers in the world.

Tashirojima Island in Ishinomaki City located east of Sendai City is known as the ‘Cat Island’. Cats come to welcome the boats at the port. Many cats wait patiently around the fishing port for fishermen to return. Neko-jinja or the cat shrine is located in the central area of the island and it enshrines a “cat god” in hope of a good catch and safety of the fishermen. Cats have been worshiped as gods for several hundred years when people began forecasting the outcome of fishing based on cats’ behavior. Tashirojima Island was damaged by the Great East Japan Earthquake and tsunami in 2011, but many of the cats survived, evacuating to the area around Neko-jinja. [ read more ]

Aside from the cat island described above, it is in Japan where “Hello Kitty” originated (by Sanrio Co. Ltd.), Kroochi, the stray cat, and the now popular cat cafes and of course, the Maneki-neko (welcoming cat and lucky charm).

When did cats first appeared in Japan? Mark Gallucci wrote a comprehensive article on cats and the Japanese:

First introduced to Japan around 500 A.D., cats instantly proved their worth as guardians of Buddhist temple manuscripts. Mice and other rodents were particularly fond of the parchment used in most documents of the time, so cats were regularly considered both protectors of the home and of valuable books. Cats were often housed in private pagodas in Japan and were considered so valuable that by the 10th century CE, only the nobility could afford to own them. [ source ]

There is, of course, always a ‘dark side’ exemplified by the bakeneko (or the demon cat) and the nekomata (a cat who stalks and attacks humans). Hyakumonogatari Kaidankai explains:

The word bakeneko is often used as a catch-all term for the mysterious and magical cats of Japan. Nekomata in particular are sometimes called a type of bakeneko. But this is a misuse of the name. Kaibyo(怪猫) is the general term for paranormal cats in Japanese. Bakeneko, just as their name implies, are defined by their ability to transform. Specifically, bakeneko are able to take human shape, or near-human shape. Some bakeneko maintain a cat form, but they are able to speak human language and wear human clothes. Some legends say that these cat-shaped bakeneko put towels on their heads and dance on their hind legs. Much, much rarer legends are humans who change shape into cats, but which are also called bakeneko. [ source ]

I just finished watching the final episode of Natsume Yujinchou Go, the fifth installment in the Natsume Book of Friends series and one of its major (and infamous) character is a cat, named Madara – the main protagonist’s protector against ghosts and ghouls.

Fondly referred to as Nyanko-sensei, Madara is a mysterious, pint-sized feline spirit who has his own reasons for sticking with the boy. Based on the critically acclaimed manga by Yuki Midorikawa, Natsume Yuujinchou is an unconventional and supernatural slice-of-life series that follows Natsume as he, with his infamous protector Madara, endeavors to free the spirits bound by his grandmother’s contract. [ Natsume Yuujinchou, My AnimeList ]

My AnimeList reveals the Top 20 Cats in Anime, featuring:

On the live-action scene, the latest installment of the Neko Samurai franchise is up for a new installment. Neko Samurai is all about a once-feared swordsman named Kyutaro (Kazuki Kitamura) who always has a scowl, but is now dirt poor and lives by himself. Desperate to find a job, he was employed by a dog lover Sakichi who ordered him to kill a cat (owned by a bitter rival). The cat in question is named “Tamanojoh”, but instead of killing the creature, Kyutaro became fascinated with the cat and became its protector. In the latest live-action series, Takuro Ohno plays the main character.

The first Japanese cat movie I saw was Kimi to Boku back in 2012. Directed by Takashi Kubota (who also did Bad Boys J), it stars Aoi Nakamura. The movie is based on the web animation created by Shigeto Yamagara, and it tells the true story of a 10-year relationship between a cat named “Ginougou” and the owner who dreamed of becoming a manga-ka.

What makes this short 45-minute movie quite memorable is the successful progression of the relationship between Nakamura’s character and the cat, which appeared as a wide-eyed cute kitten in the beginning until it became a full-grown cat with the same ‘soulful’ eyes.

In an interview, Nakamura mentions the difficulty of showing a 10-year old relationship in a short film, but I think he did a fine job. Nakamura, who won the Junon Boy contest may not be able to gain the stellar heights of some of his fellow model winners, but in Kimi to Boku, he was at his most unguarded moments. The role is tailored fit for him. It’s hard to describe the ‘relationship’ between the actor and the different cats used in the film, but for me, they have established some endearing connection making the movie a bit sentimental but never overbearing or forced.

In 2012, her movie Rentaneko fascinates moviegoers. Screen Daily calls it “a gentle charmer of a film”.

Sayoko rents out cats. Every day she walks along the banks of the river towing her animals in a little handcart, with a parasol to shade her against the heat and a megaphone over her mouth, calling out “Cats for rent! Are you lonely? Why not rent a cat?” Sayoko’s cat rental helps lonely people fill the emptiness in their hearts. But Sayoko is also lonely–ever since her grandmother’s death she has lived with her cats in an overgrown haven in the midst of the big city where all she hears–apart from the cats’ meowing–are her eccentric neighbor’s insults. One day, a young man turns up from Sayoko’s past. He follows her home and all at once Sayoko’s life seems to fall apart… [ source ]

Japan Times’ Mark Schilling in his review mentions the movie as “More than a fairy tale for adults, “Rent- a-Cat” is like an illustrated collection of the so-called light essays so popular with female readers here. The style is spare but poetic, the mood is warm but wistful, and the characters are lovable but finally enigmatic.”

If Cats Disappeared From the World is one of the movies that is instrumental in giving Aoi Miyazaki her Best Supporting Actress trophies in the current award season in Japan. Directed by Akira Nagai, the film is also credited with launching Takeru Satoh’s dramatic acting, following successful efforts in the action-thriller genre with the Rurouni Kenshin franchise.

While some critics make mention of using the cats as emotional wrecking balls, I think Nagai was successful enough to make this more than just a tearjerker of a movie. The cats may not be playing such a prominent role compared with, say in Rent-a-Cat or even Kimi to Boku. The cat sort of differentiated the timeline, making the transitions in the movie more pronounced and less confusing.

Gou Gou Datte Neko de Aru (Fall 2014, WOWOW) is based on the manga by Oshima Yumiko. It tells about Kojima Asako (Miyazawa Rie), a famous female mangaka who after losing her beloved cat, Ca Va, has not been drawing, and eating well. Her patient editor, Omori tries to coax her out of her depression by bringing her food and constantly checking up on her. In order to start anew, Asako moves to a new house near Inokashira Park in Kichijoji. Her disposition gradually improves but still she cannot bring herself to go back to drawing. That is until she encounters a tiny kitten in the park one day… [ Storyline by Earth Colors ]

Description about the second series is also available from Earth Colors.

While the Neko Samurai series may be the preferred cat movies of men, then Rie Miyazawa’s dramatic, yet funny portrayal as a cat lover in Gou Gou, The Cat is for the ladies.