Massive updates courtesy of Suga Kenta, Murakami Nijiro and the pair of Hayama Shono and Takasugi Mahiro, plus how effective is Matsuzaka Tori’s agency in re-energizing his acting career? Let’s take a closer look at Matsuzaka Tori first!

His short but memorable role in Her Love Boils Bathwater seems to signal the return of Matsuzaka Tori as one of Japan’s enigmatic actors with still plenty of talent to show. Even his reunion with Suda Masaki in Kiseki: Sobito of That Day brightens up Japanese movie lovers who may be adventurous enough to watch the movie even without subs! And add four (4) more projects which stretch to 2018 including Birds Without Names (as Aoi Yu’s love interest) and Yurigokoro, (co-starring Yoshitaka Yuriko) among others. [Those two movies we’ve featured already, so let’s focus on Impossibility Defense for now]

Based on the manga series “Funohan” written by Arata Miyatsuki and illustrated by Yuya Kanzaki, Impossibility Defense stars Matsuzaka Tori as a contract killer who has perfected killing his targets by making it almost impossible to trace. Wearing a black suit seems to add a certain mystique to the man it seems…

With Sawajiri Erika, Mamiya Shotaro and Arata Mackenyu among the cast. Can Matsuzaka Tori regain his foothold as one of Japan’s foremost leading men?

Chotto Mate Yakyubu! – ちょっとまて野球部! from Nippon Shuppan Hanbai and Toei Video stars Suga Kenta, Koseki Yuta, and Yamamoto Ryusuke as high school students who are also members of the school’s baseball team. A problem appears when Hiroki (Suga Kenta) received a failing grade, forfeiting him his slot in the baseball lineup. Can he – literally and figuratively – make the grade? 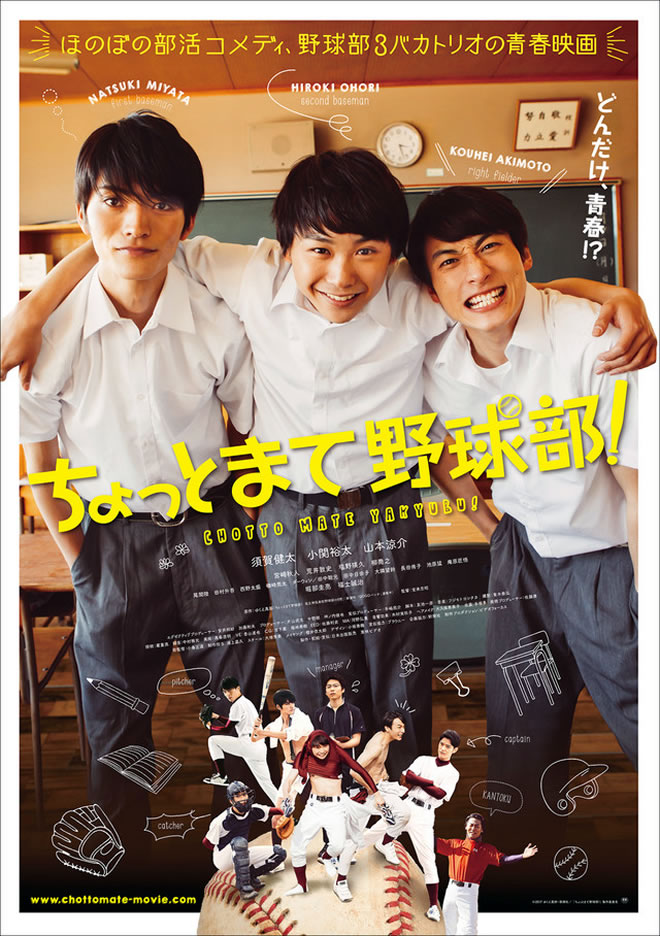 Still young at 23, but already a veteran in the movie and drama scenes, Suga Kenta deserves – perhaps – a dozen or so leading roles.

As the main attraction in this sports/youth comedy-drama, Kenta is expected to work his wonders in this film. KEN-On’s Yamamoto Ryosuke is the neophyte among the three, with Koseki Yuta gifted with an amazing year as an actor.

After being haunted by a friendly and charming ghost in Anohana, Murakami Nijiro teams up with Yamada Yuki, Yoshida Madoka, Kato Rena, and Mana Kinjo in Nidome no Natsu, Nidoto Aenai Kimi – 二度めの夏、二度と会えない君, the latest attempt by the Japanese to spin off the time travel adventure genre. This time they added a musical band as a rallying point and a personal tragedy. 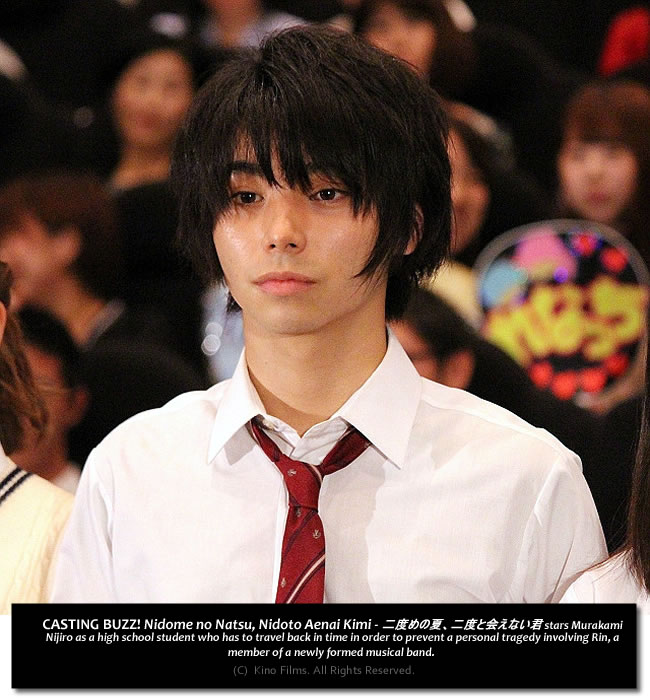 A newly-formed musical band spearheaded by Satoshi (Murakami Nijiro) and transfer student Rin (Yoshida Madoka) attempts to defy school regulations by performing during the school’s cultural fest. There is already a ban on forming bands.

However, a more personal issue is about to dominate the band’s very own existence – Rin collapses, and the only solution? Satoshi has to travel back in time and meet Rin as if for the first time,

Finally, Takasugi Mahiro and Hayama Shono will reprise the roles first played by Suda Masaki and Ikematsu Sosuke in the latest live-action adaptation of Setoutsumi. Based on the manga series “Setoutsumi” by Kazuya Konomoto, the new TV Tokyo drama series will feature two high school students who decided to meet after school and hang out together – with as little plans (or agenda) as possible.

Utsumi (Takasugi Mahiro) is a loner who kills time by doing nothing on the riverside. Seto (Hayama Shono) quits the soccer team in favor of doing nothing in particular and joins Utsumi.