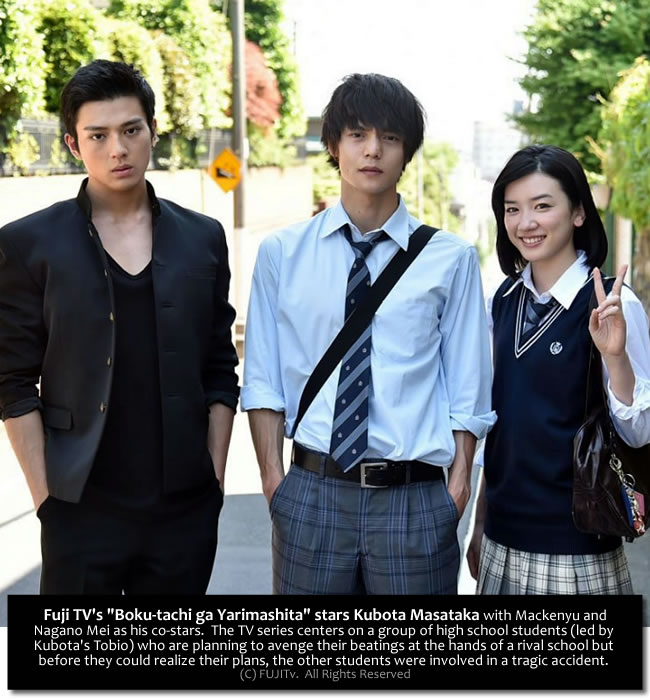 Aside from such a tradition, we have come to expect actors in their early thirties to don the high school uniform and play teens notwithstanding their bulkier physique and matured facial features. But then again, who can argue against the likes of Oguri Shun, Ando Sakura, Tsumabuki Satoshi, Saitoh Takumi, Takei Emi, and Matsuyama Kenichi playing high school students? Is it even fair to ask producers if they could possibly cast younger actors instead?

Death Note actor and almost thirty-something Kubota Masataka – who recently was cast to play the main character in Tokyo Ghoul – has added another TV drama to his resume. Fuji TV’s “Boku-tachi ga Yarimashita” is now the latest addition to the Japanese school-youth drama/thriller we have mentioned above.

The TV series centers on a group of high school students (led by Kubota’s Tobio) who are planning to avenge their beatings at the hands of a rival school which is located nearby.  But before they could realize their plans, the other students were involved in a tragic accident. Tobio and his gang are now suspects.

As previously reported, Kentaro headlines Demekin, his first starring role, as Sata Masaki who dyes his hair red and graduates from being bullied to becoming a notorious bully instead. Along with his friend, Atsunari (Yamada Yuki), he launches a motorcycle gang looking for trouble.

The movie Tomodachi Game, which complements the 4-episode drama series is slated for a June 3 release in Japan. Based on the manga series “Tomodachi Gemu” written by Mikoto Yamaguchi and illustrated by Yuki Sato, the live-action adaptation features a young man, Yuichii, known for his “friends before anything else, including money” life principle:

High school student Katagiri Yuichi cares about friendship more than money because of his mother’s teachings. One day, Yuichi and his close friends, Shiho, Tenji, Makoto and Yutori, are suddenly forced to participate in a mysterious game of wits that involves a lot of money. It is supposed to be a simple game. However, friendships are unexpectedly tested under extreme conditions which triggers paranoia. The trick to clearing the game is to trust in friends. But will Yuichi and his friends choose money over friendship?