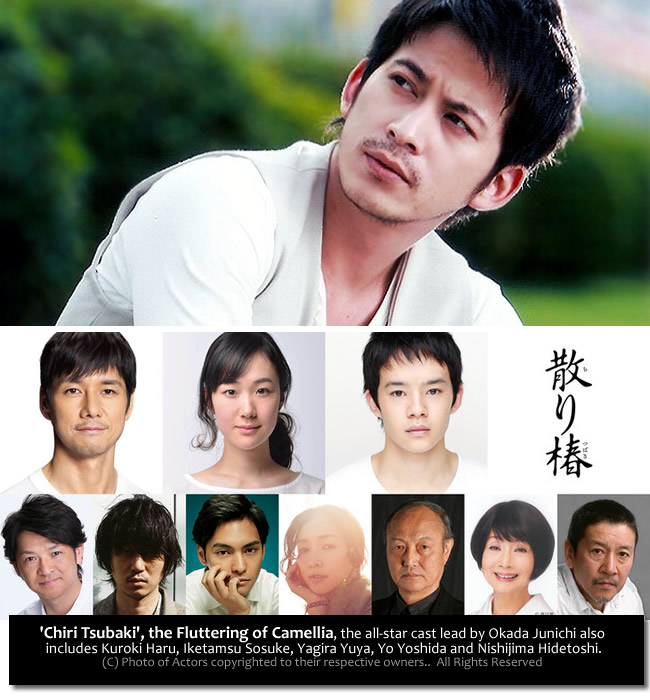 We’ll be having a special report on Death Note, including some history lessons of a sort, plus this week there are plenty of casting news! Okada Junichi is on a roll – aside from the historical drama/thriller Sekigahara (関ヶ原), the actor is set to join another film entitled Chiri Tsubaki (散り椿 – which literally translates to “Falling Camellia”).

The new film is under the helm of award-winning cinematographer and writer Kimura Daisaku. The ensemble cast includes Nishijima Hidetoshi, Kuroki Haru, Ikematsu Sosuke, and Yagira Yuya. [ More details about the movie to follow soon ]

Back to Death Note, as some of you may be aware, there is a live-action film produced by Netflix and stars Western actors. There are plenty of online discussion about the adaptation and some mention of what influenced the manga in the first place. An analysis of the Death Note characters will be launched soon! As a sneak peak, here’s a part of the article written by our friend and fellow blogger/movie reviewer:

Speaking of Yagami’s ‘world peace’, his God complex and desire to cleanse the world of its sins makes sense in a Japanese context. Why? Because Japanese society, one that is Neo-Confucian, preaches the importance of obedience, discipline, self-control, group harmony/unity and individual identity becomes lost somewhere along the way. Basically, homogenity. Being “Killa” becomes Yagami’s individual identity. Becoming the world’s savior through the death note becomes a rejection to conform.

This is seen as a lashing out behavior, in a way.

Maybe in the West, when teenagers lash out or rebel, they explode in rage or in different ways to make a “statement” but in Japan’s rigid society, lashing out is saying “no” to the rules. Cutting themselves from the system and marginalizing themselves is a form “no, I will not conform to you.”

Manami (Tomite Ami) is targeted by vampires on her 22nd birthday and K (Kaho), who possesses tremendous power, tries to save her in a raging battle. On that day, young men and women are invited to Hotel Requiem where a huge nationwide matchmaking convention is being held by the mysterious Yamada (Mitsushima Shinnosuke). He lives and runs this ornately beautiful, palatial hotel with a bizarre empress (Adachi Yumi) and Elizabeth Báthory (Kagurazaka Megumi). Then Yamada suddenly declares to the gathered crowd that tomorrow will be the apocalypse and only the people inside this hotel will be saved. [source]

Yoshizawa Ryo is fast catching up to the frontrunners – Fukushi Sota, Suda Masaki, and Yamazaki Kento – with his own wave of casting news! Aside from the previously announced River’s Edge movie with Nikaido Fumi, Ryo joins the Gintama LA (Oguri Shun) and headlines the recently concluded Tomodachi Game. He will join Yamazaki Kento (after Wolf Girl and Black Prince) in The Disastrous Life of Saiki K.

A recent campaign to garner interest for his photo book keeps the actor in the spotlight.

As with other Japanese actors, Yoshizawa is also part of the Kamen Rider casting history – Kamen Rider Fourze. My first viewing of Yoshizawa is in the drama Kingyo Club, as Irie Jingi’s best buddy.

His performance in Tomodachi Game has paved the way for more acting mileage as he demonstrates he has what it takes in doing intense, dark roles. It doesn’t hurt that his agency seems to be pushing him ever more.

The live-action movie follows Satoshi (Murakami) who formed a band to perform during the school’s cultural festival. A fellow student Rin (Madoka Yoshida) joins the band and they perform live even though such performances are banned by the school admin.

Rin suffers a tragedy and Satoshi felt desperate, but there is a window of opportunity to meet her once again – this time her “earlier self” via time travel.

Hongo Kanata joins forces with Yokohama Ryusei and Yano Masato for the TBS drama series, Kaijuu Club (Kusou Tokusatsu Seishunki). The show is all about passionate fans of Ultraman and Ultra Seven heroes and characters. Hongo plays one of the leaders of the Kaijuu Club which is formed to write reviews about these iconic Japanese heroes.

Aside from boasting their knowledge of Ultraman, the club writes reviews and analysis of special effects that is dominating these shows at that time. Yano Masato plays Kanata’s rival. Both characters strive to write the best reviews of these superheroes!