When it comes to compelling, haunting, sensual, and hypnotic performances, I have come to rely on Aoi Yu, Mitsushima Hikari, and Kadowaki Mugi. These actresses are known for their on-screen collaboration with some of Japan’s best filmmakers, and their latest projects have generated a lot of buzzes – some may be potential award winners!

Aoi Yu is cast in two major movies scheduled for the last two quarters of 2017 – Tokyo Ghoul and The Birds She Never Knew. She recently won a Best Actress award at TAMA for Yamashita Nobuhiro’s Over the Fence where she plays a club hostess who becomes involved with Odagiri Joe’s character.

In The Birds, she plays an opportunistic woman who lives with an older man (Abe Sadao) but becomes attracted to another, albeit younger and more attractive, guy played by Matsuzaka Tori. The trailer is below:

In the 30-second teaser for Tokyo Ghoul, Miss Yu’s presence is magnified just by a mere change in facial expression. 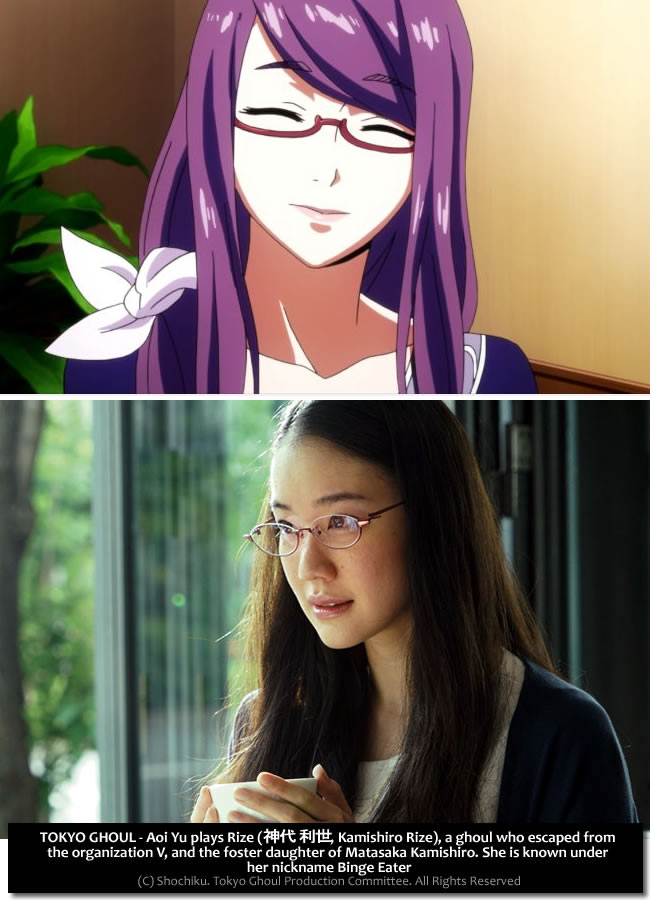 Her role as the seductive yet deadly Kamishiro Rize is one of the characters I’m most anticipating in the LA which also stars Kubota Masataka. Her character is described as:

Rize is a voracious, independent ghoul who acts as a femme fatale to those who fall victim to her charms. She is an enigmatic female with many acquaintances whom are left with a mysterious impression of her and those who come into conflict with her rarely come out alive. She appears to be a shy, slender girl with long purple hair and eyes, and an hourglass figure. As a ghoul blending into human society, she wears a normal attire fit for a young woman, showing a bigger preference over dresses. After she had moved to the 20th ward, she was seen wearing a pair of red frame glasses, even though she does not seem to have any eyesight problems. Her attire reveals some cleavage, possibly to seduce and allure males as her prey. Rize is very attractive and is aware of this fact, often manipulating it to her advantage. [ source ]

Nagayama plays a naval officer who arrives on the island Kakeromajima. He befriends the locals, including the school children of whom Mitsushima is the homeroom teacher. In the Inoue Mao asadora, Ohisama, Nagayama and Mitsushima also play a couple, with Nagayama as Inoue’s younger brother, while Mitsushima is one of Inoue’s best friends. 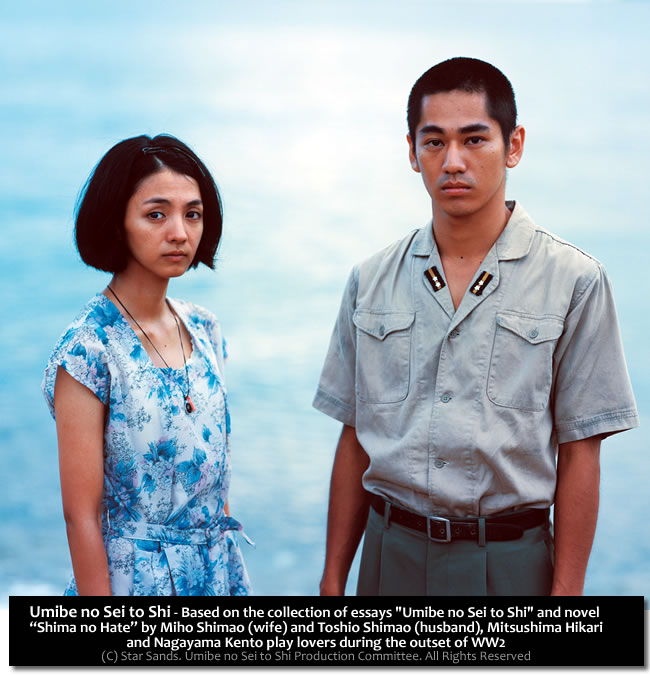 In Sekai wa Kyou kara Kimi no Mono (In The World is Yours from Today/世界は今日から君のもの), Kadowaki Mugi once again demonstrates her acting range by playing a geek who likes everything otaku. 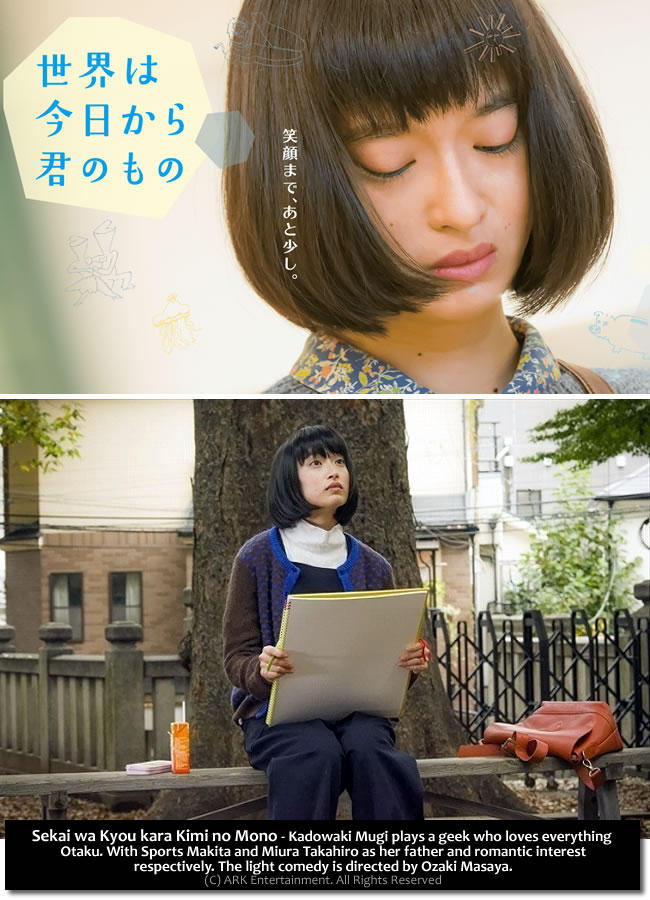 Loveless and without a job, Masami (Kadowaki) soon discovers that her talent in drawing manga characters can pave the way for an exciting career and even a romantic relationship with someone she already finds attractive. The new movie from Ozaki Masaya will team up Kadowaki with the wacky Sports Makita who plays her father, and Miura Takahiro as her romantic interest.

The trailer below is already very promising!

Japan Academy Prize winner for Best Director, Ishii Yuya, is back and reunited with one of his favorite actors, Ikematsu Sosuke, for Yozora wa Itsudemo Saiko Mitsudo no Aoiro da (The Tokyo Night Sky Is Always the Densest Shade of Blue/夜空はいつでも最高密度の青色だ).

Don’t let the long-winded title confuse you, it’s about Mika, a nurse, and Shinji, a laborer, and their romance and love affair. The movie is based on the book of poetry of the same name and was written by Tahi Saihate. Matsuda Ryuhei, who won Best Actor for Ishii’s The Great Passage is playing one of the supporting roles together with Miura Takahiro, Sato Ryo, and Ichikawa Mikako. 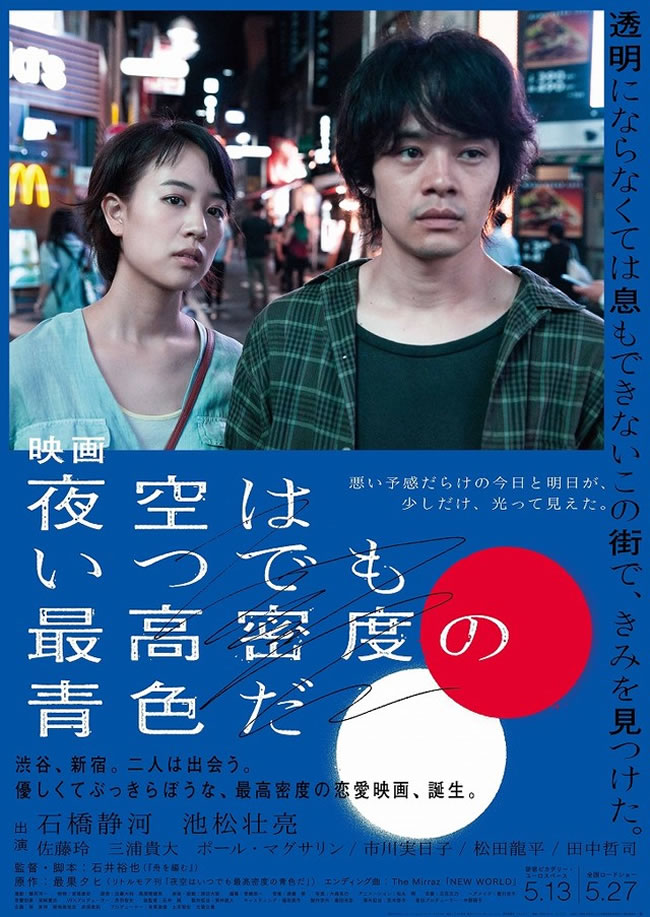 Among the new movies above, which one excites you the most? Let us know what you think!