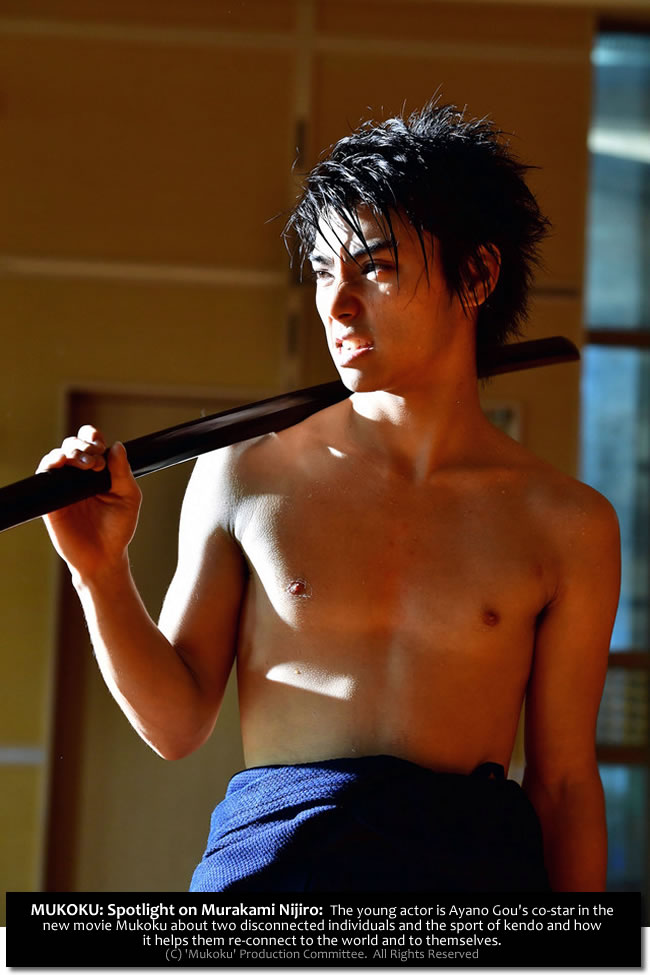 Murakami Nijiro co-stars with Ayano Gou in Kumakiri Kazuyoshi’s latest movie Mukoku about two disconnected individuals who find inner peace through the sport of kendo. Gou’s character – Yatabe Kengo – is a disillusioned individual who is gifted in the martial arts, but a recent tragedy involving his domineering father put his sport on hold. Murakami, who made waves in Aogeba Toutoshi and Destruction Babies, plays a high school student (Haneda Tooru) who loves to rap but turns to kendo when a monk discovered his talent in the sport.

I had the privilege to screen the movie a few days ago and what really struck me is how Mr. Murakami has grown as an actor. Certainly, people think very highly of Ayano Gou, but Mukoku is as much Ayano’s movie as Murakami’s.

If you’ve been following the young actor’s acting career, you may remember him in Kawase Naomi’s Still The Water, his film debut and in the span of three years, he has already perfected the ‘angsty angry young man who rebels for a cause’ type of roles. Cases in point:

In Mukoku, Murakami takes on a similar character as a teen who loves to rap – in a similar fashion to Eminem’s 8 Mile role – but in a Japanese setting. His passion for rap music and performing live took a drastic turn when he was bullied by martial arts students of kendo. During a fight, a monk spotted Tooru’s gift for the sport and pushes him to practice. While doing a chore for the monk, he encountered Kengo – now a drunkard – and they got involved in a tussle.
{gallery}profiles/nijiro-murakami/mukoku{/gallery}

Based on the novel “Mukoku” by Shu Fujisawa, director Kumakiri, divides the movie between Tooru’s awakening and self-discovery and Kengo’s reconnection and reconciliation to the world and his father.

Murakami is given plenty of scenes to shine – playing rap music while hallucinating and throwing up fishes out of his mouth, challenging Ayano to a duel, intense martial arts practice, and just over-all awesomeness displayed throughout the film.