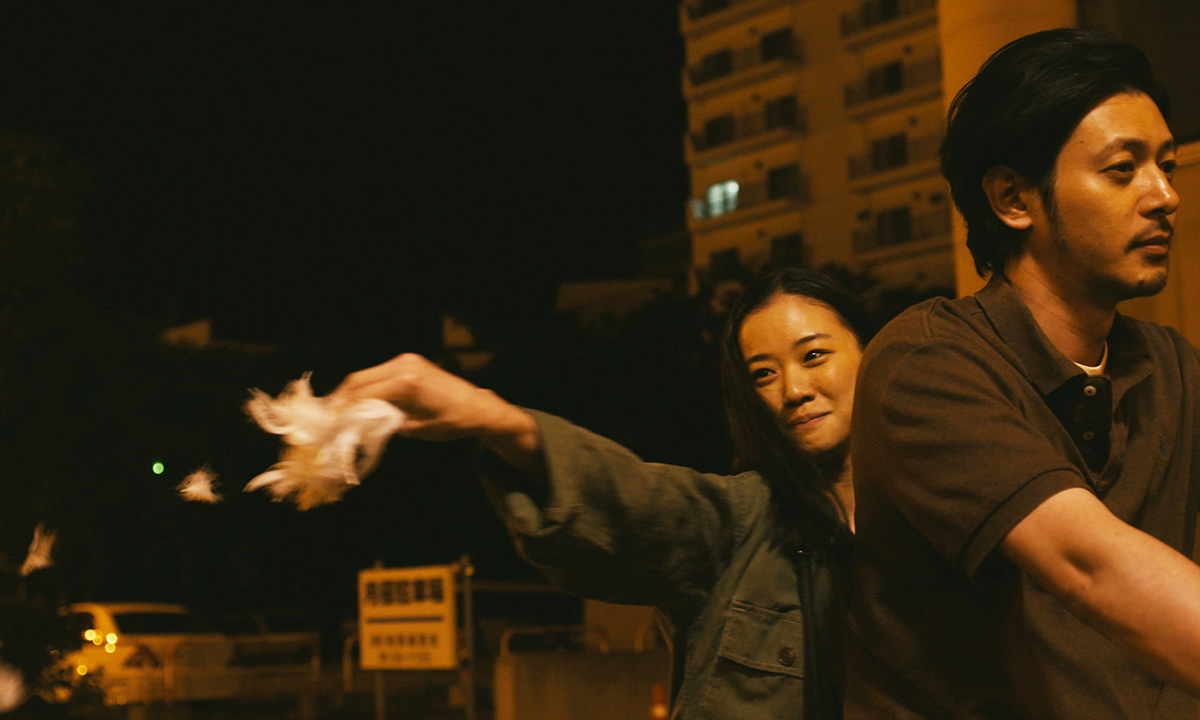 Yamashita Nobuhiro’s Over the Fence continues the tradition he sets in showcasing individuals marginalized by society and their own family.

The movie centers on a recently divorced and traumatized man and a club hostess with an unconventional personality.

Shiraiwa Yoshio (Odagiri Joe) returns to his hometown, in Hakodate, as a result of his separation from his wife and daughter. He enrolls in a vocational school taking up carpentry to start anew, though he remains unsure what to do with his life.

A fellow student Daishima (Matsuda Shota) befriends Yoshio and invites him to a nightclub. While discussing business with his new friend, a young hostess – Satoshi (Aoi Yu) – begins to dance and act like a swan (or a big bird for that matter). Yoshio is intrigued. He recalls the same girl doing the same bird-like impressions previously. Daishima sets them up, Yoshio seems hesitant, but the bird ‘impressionist’ pushes him forward – perhaps sex would do them both good?

What follows next are both bizarre and irritating, as Satoshi pushes for intimacy, but the young man opted to reject her. In a tit-for-tat, Satoshi turned hostile just when Yoshio is about to confide himself and let go of his emotions.

This is not the first time that Miss Yu acted with Odagiri Joe. They were also intimate in Mushishi, but Over the Fence leveled up the intensity and animosity up more than a notch. Their budding romantic relationship is ugly and confrontational at times, bizarre at another, but ultimately boils down to something hopeful, and ‘normal’ in the end, if I can use the word.

Aoi Yu has a history of playing bizarre, oftentimes, difficult characters. While she’s completely normal in Shining Boy and Little Randy as Yagira Yuya’s romantic interest (they were both fascinated with zoo animals), she exhibited the same irritating personality as Okada Masaki’s girlfriend in Honokaa Boy as in this film. What is most striking about Miss Yu is her ability to integrate dancing in some of her most fascinating roles – Hula Girls and Hana and Alice. In Over the Fence, her ‘dancing’ is but an interpretation of rebelling against convention. Or is it a celebration of life and relationships? How would you react if you see a girl imitating a bird? And in a nightclub at that? I can’t imagine any other actress doing justice to such a role!

While I’m not totally impressed with Over the Fence, I remain fascinated and excited just thinking about Nobuhiro’s upcoming films. His previous projects are the kind of movies that leave lasting impressions – ‘My Back Pages’ with the intense acting showdown between Tsumabuki Satoshi and Matsuyama Kenichi, ‘Misono Universe’ offering both dramatic and comedic moments with Nikaido Fumi and her bizarre partnership with Johnny’s Shibutani Subaru. Of course, the closest to Over the Fence, is perhaps, The Drudgery Train as Moriyama Mirai’s character is as irritating and intense as Miss Yu’s.

As with the director’s other films, ‘Over the Fence’ has side characters that complement the main protagonists, making the overall viewing experience more impactful – Mitsushima Shinnosuke, as the bullied Mori is an interesting character study. Yuka, as Odagiri’s wife, acted with the same lasting impressions as well.

Lastly, I am impressed with Odagiri Joe’s casting. While he has certain limits as an actor, it’s that same limitation that made his character more natural and totally complementary with Yu Aoi’s overpowering presence.

Ten years ago, Mr. Nobuhiro was asked about his films’ chances to compete in a film festival such as Cannes, and he replied:

Actually, I can’t really imagine myself and a film of mine being shown in Cannes, to be honest. It’s happened that a producer of one of my films told me “Sorry, it didn’t work out in the end”, but I always think “That figures.” I’m not at all disappointed, because I don’t really consider it possible myself. [source]

Eight movies and a decade later, Mr. Nobuhiro may remain relatively unrecognized in France, but his movies are as good as some which competed in said French film festival.