Reports have it that there are two versions of Pink and Gray, one has the full-frontal sex scene featuring Johnny’s idol Yuto Nakajima and Kaho, while the ‘tame’ version deleted the love scene to appease the devoted fans who might get upset to see Nakajima having sex.

I don’t know if the fans will grow up, but Nakajima certainly grew in acting stature as Rengo Shiraki.

Based on the book by fellow Idol, Shigeaki Kato, Pink and Gray explores the friendships and careers of Rengo (Nakajima), Daiki (Masaki Suda) and Sairi (Kaho). They once live together in a tenement block while going to school. Both the guys were spotted by an agent and began to play extras in some film while Sairi left with her family to settle elsewhere. Luck smiled at Rengo who jumps from playing bit roles to becoming the star. But stardom means sucking it up with the establishment. Saying more would be counterproductive.

Directed by Isao Yukisada who also made Five Minutes to Tomorrow (dramatic yet inept) and Parade (thrilling and satisfying), what makes Pink and Gray worth a review is the ability of the film to rise above mediocrity. Pink and Gray is not an idol movie where everything goes smoothly (i.e. fun, boring and predictable) There are plenty of twists and turns to keep the audience entertained and guessing. 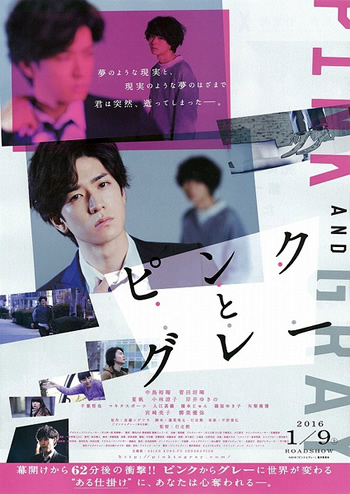 Yuto Nakajima shines as the bubbly yet complicated Rengo, but Masaki Suda steals the show. As the insecure and ‘less talented’ Daiki, Sudachi is like a force of nature – violent, vengeful, volatile. Plenty of acting showdowns between the two, although I have the feeling that most of the scenes (and the dialogue) favor Rengo to a large extent. However, with the reversal of fortunes, Daiki is given the spotlight.

In one of the highlights of the movie, a violent, physical altercation between Daiki and Rengo explodes – Rengo acts reconciliatory while Daiki unleashes all the pent-up, frustrated emotions of playing in the shadows. This scene alone is worth the price of the ticket.

Kaho enters and exits the scene while Yuya Yagira could have been in more.

We’ve seen plenty of Hollywood and Western movies where stardom requires a state of being void of emotions. Pink and Gray is no different – it’s just that the setting is in Tokyo, but the wolve packs are there – the paparazzi, gossip columnists, intrigues.

Friends and lovers – unfortunately yet truthfully in such a setting – are also disposable.