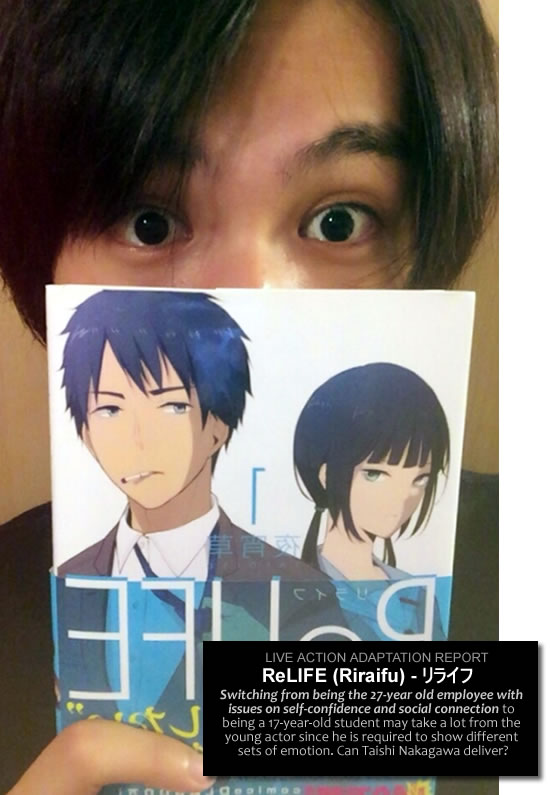 Last October 4, Taishi Nakagawa announced on his official blog that he’d be playing the central role in Re: LIFE. Re: LIFE is an ongoing Japanese science fantasy drama (web based) manga series written and illustrated by Yayoiso. It’s being published by NHN PlayArt on the comico website since October 12, 2013, and already has six volumes compiled by chapters and published by Earth Star Entertainment. The anime version was aired on television on July 2, 2016, composed of thirteen episodes. We posted the casting news last September.

The movie is reported to have an original ending, which may depart (or not) from the original intention of the writer.

Dismissed as a hopeless loser by those around him, 27-year-old Arata Kaizaki bounces around from one job to another after quitting his first company. His unremarkable existence takes a sharp turn when he meets Ryou Yoake, a member of the ReLife Research Institute, who offers Arata the opportunity to change his life for the better with the help of a mysterious pill. Taking it without a second thought, Arata awakens the next day to find that his appearance has reverted to that of a 17-year-old. Arata soon learns that he is now the subject of a unique experiment and must attend high school as a transfer student for one year. Though he initially believes it will be a cinch due to his superior life experience, Arata is proven horribly wrong on his first day: he flunks all his tests, is completely out of shape, and can’t keep up with the new school policies that have cropped up in the last 10 years. Furthermore, Ryou has been assigned to observe him, bringing Arata endless annoyance. ReLIFE follows Arata’s struggle to adjust to his hectic new lifestyle and avoid repeating his past mistakes, all while slowly discovering more about his fellow classmates. [ source ]

Yuna Taira joins the film as Taishi’s classmate – Chizuru Hishiro – described as “very smart but socially awkward classmate.” She also happens to be one of the most interesting characters.

Some people may jump at the opportunity to have a second chance. Especially so when current life situation looks hopeless and helpless. That’s the case of Arata, already 27 years old, still unmarried and relying on his parents for financial support (i.e. NEET)

A NEET or neet is a young person who is “Not in Education, Employment, or Training.” The acronym NEET was first used in the United Kingdom, but its use has spread to other countries including Japan, South Korea, and Taiwan. [ source ]

The school romance fantasy and slice of life drama has Arata (Taishi Nakagawa) rejuvenated ten years back. As part of an experiment, our character returns to school and interacts with his younger and unsuspecting classmates.

I adore the anime! I find the characters authentic, cool and exciting, and I think that this might as well be Taishi’s most challenging role to date. Switching from being the 27-year old employee with issues on self-confidence and social connection to the 17-year-old student may take a lot from the young actor since he is required to show different sets of emotion. I guess it will also depend on the director and how he can inspire Nakagawa.

Aside from the main character and Taira’s Chizuru, the other characters are also significant roles to play:

Ryō Yoake – Arata’s supervisor, the same guy who offered him to join the experiment. He appears to be the happy guy but makes Arata irritated to no end. This secondary character, hopefully, will be played by someone with a “magnetic” personality. I’d love to see Ryo Yoshizawa takes this role or even perhaps Yu Inaba (he was in the Masataka Kubota drama MARS, and he did well) – Watch the second Youtube video clip above since both Taishi and Ryo are on it. [ Updated: Yudai Chiba is playing the role! – See the gallery below ]

Rena Kariu – the stubborn, competitive classmate who aspires to be class rep, but was defeated by Chizuru; Elaiza Ikeda is cast to play Rena.

An Onoya – Sai Okasaki is cast to play the role.

Kazuomi Ōga – the male class rep, who is clueless about romance and love. Is Chiba Yudai going to play this role? [Updated: Mahiro Takasugi is cast as Oga, see Tweet above ]

I’ve seen my share of body-switching, time travel romance mashup, but this one is especially unique because the subject matters they tackle are timely, relevant, serious and funny.

It’s hard to offer solutions to the problems of the young – bullying, loneliness, inability to connect, being misunderstood and misinterpreted, among others – that suicide and Hikikomori seem the only alternatives.

One of my main criteria in judging the quality of an anime (or movie) is its ability to make me think – long after I’ve seen it. The anime version of Re: LIFE made me reflect on a lot of stuff these past few days.

How thrilling it must be to return to school after so many years- face your tormentors, beat the valedictorian (honor students) at their own game or even just stand up to a teacher who has wronged you previously. So much scenario to imagine.

If you’re to asked me, I will volunteer to join this experiment without thinking – yup, not for a second!