One Hitoshi, director of Moteki and Bakuman, has made his admirers proud – once again – with Scoop!, the movie starring Fukuyama Masaharu and Nikaido Fumi.

Shizuka (Fukuyama) is a freelance photographer who once was known for producing award-winning news snapshots but has succumbed to gambling and is now a member of the paparazzi. Nobi (Nikaido) is a rookie reporter who is assigned to work with Shizuka by her editor (Yoshida Yo). The pair appears to be going nowhere as Shizuka has no regards to the clueless and often fumbling Nobi, while the young girl frowns on the 40-something photographer’s unscrupulous ways.

After several missteps, Nobi gets a taste of her first headline with the help of Shizuka’s informer (Franky Lily) and things begin to change in her work ethics and their relationship. A political scandal, several celebrity scoops, and more headlines resulted as both exert time-consuming efforts to hunt people of interest while the whole of Tokyo sleeps. Just when things are getting better in both their professional and personal relationships, a tragedy strikes…

Fukuyama, one of Japan’s most celebrated musicians, radio host, and actor was last seen in Kenshin and in Koreeda’s Like Father, Like Son is unrecognized as the paparazzo. Humping a girl while completely oblivious to any onlookers inside his SUV serves as the film’s opening scene and sets the tone for the wacky often times hilarious ways to get a scoop. If you’re a fan of his TV series and movies, then you’ll respect him here even more. There is a mix of a “grunge”-y look and 2-day stubble appeal that is comparable to Yakusho Koji in The World of Kanako but with less color and even less violent streak. Shizuka is a sexist, opportunistic beast who has seen better days.

As the rookie reporter, Nikaido has revealed another side of her acting – comedy. The internationally recognized actress is still a work-in-progress yet one can’t help but admire her subdued acting in an otherwise comedic film. There’s plenty of scenes to shine – lighting up fireworks to reveal a politician’s sexual escapade, throwing tantrums inside Shizuka’s SUV while waiting for a scoop, taking a snapshot of celebrities making out. What makes Nikaido a standout among her peers and even those senior to her is not just the fearlessness, but the sheer tenacity to become a character. Says Nikaido in an interview:

I consider myself a piece of a larger puzzle in film making. I’m very aware of that. I’m just part of the cast, just a subject on screen, and when the camera is on me we share the same level of importance. It’s my job to respect the character and make the character as believable as possible in the world evoked by the film. My other concerns are having good communication between the cast and myself, being able to feed off the atmosphere and to understand the director’s intent and go beyond his expectations. [ source ]

As to be expected from a relationship that totally relies on each other, our profane and vulgar photo-scooper was about to initiate a deeper, sexual relationship with his protege. The rookie who began as uptight and even “virginal”, has reciprocated with as much intensity and longing to her otherwise senior mentor. 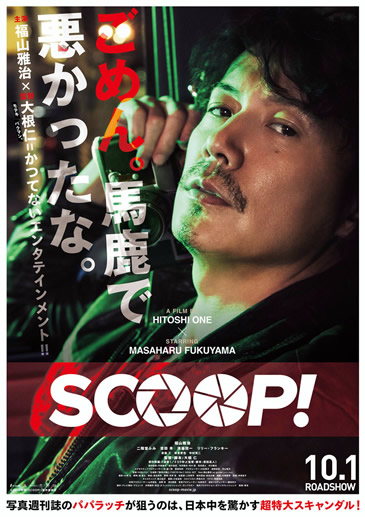 Is it creepy? Is it disgusting? I don’t think so. Age has nothing to do with it, and while I’ve heard some people complain about the “narrative problem” of the film in outlining the relationship between our protagonists, it seems natural that they would go the sexual route and thus they did.

Reportedly based on a 1985 TV movie written and directed by Harada Masato, Scoop! reminds some Alphaville’s “Big in Japan” vibes in both look and feel, but transported into a modern time where the internet plays a massive part in news and the media. This is not the first time that One dwells in the world of publication, Bakuman pays homage to Japan’s hardworking and dedicated mangaka, while Love Strikes! (Moteki – モテキ) is about a writer/blogger (Moriyama Mirai) who suddenly becomes empowered with moteki – a period when a man becomes suddenly popular with women.

The Diva Review got a hold of One and asked about what inspired him to make Scoop! to which he replied:

I think a world without entertainment scandals and celebrity gossip would be very boring.  A few years ago, I got to know one of the paparazzi, and I asked him how did he get those photos and what were some of the techniques that he used?  It was so interesting hearing their stories, and I knew this would be great for a film. Of course, I used the 1985 film as a foundation, but it’s really just the characters that I used; the story is completely different.  I felt the original material really fits our current contemporary age, and especially in Japan, from last year to this year, there have been so many entertainment scandals that have just been rousing the society, so I knew this would be a great fit. [ source ]

Even Mark Schilling at The Japan Times only has good things to say about One’s film: “… is the most entertaining film I’ve seen all year” —, which I agree wholeheartedly and I’m, indeed, quoting him!