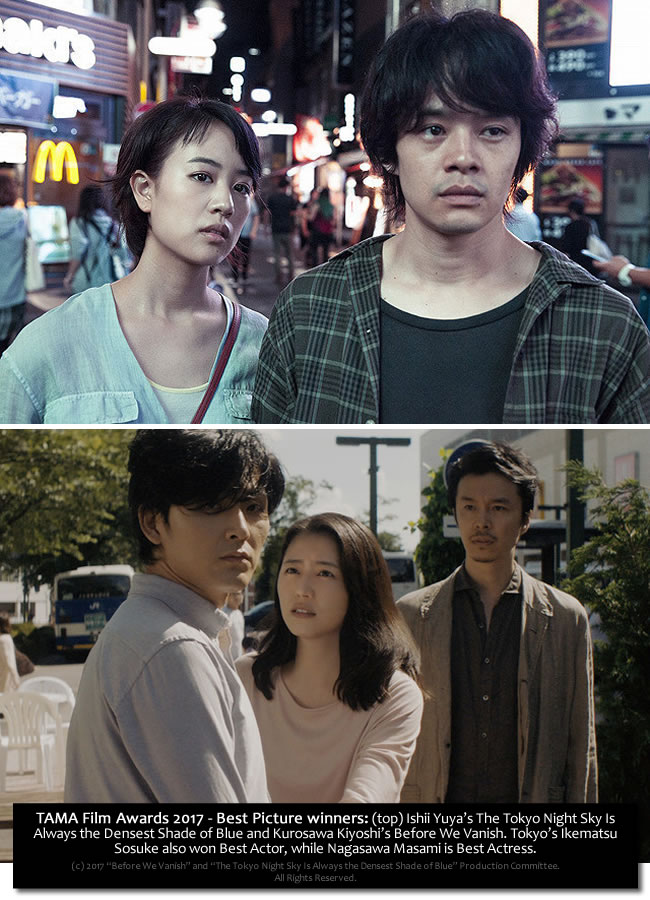 TAMA New Wave, on its 9th year of giving awards, honors Kurosawa Kiyoshi’s sci-fi thriller Before We Vanish and Ishii Yuya’s romantic-drama The Tokyo Night Sky Is Always the Densest Shade of Blue as the year’s Best Picture winners. Last year, we reported the award-giving body has recognized Yamashita Nobuhiro’s Over the Fence and Sakamoto Junji’s Danchi as 2016’s best.

TAMA New Wave started in 2000 for the purpose of discovering new talents to bring fresh perspectives into the Japanese film industry. In 2009, it introduces the movie awards to appreciate talents that are “full of vitality” thus connecting movie fans and filmmakers together. [ Official Website ]

Here’s the complete list of recipients after the jump!

Year 9 winners (Best New Actor and Actress) are especially noteworthy since 3 out of 4, we blogged of them so often. We have a Primer on up and coming Japanese actors, including Takasugi Mahiro, were he joins 14 other names on the said list. He’s also part of the cast of Nijiiro Days LA just announced recently, so things are looking up for him.

Tsuchiya Tao serves delights to her local fans (and soon the international movie audience) with 3 movies – P and JK, Tori Girl and The 8-Year Engagement. It’s also good to know that the 3 lead stars of Tori Girl are this year’s recipients.