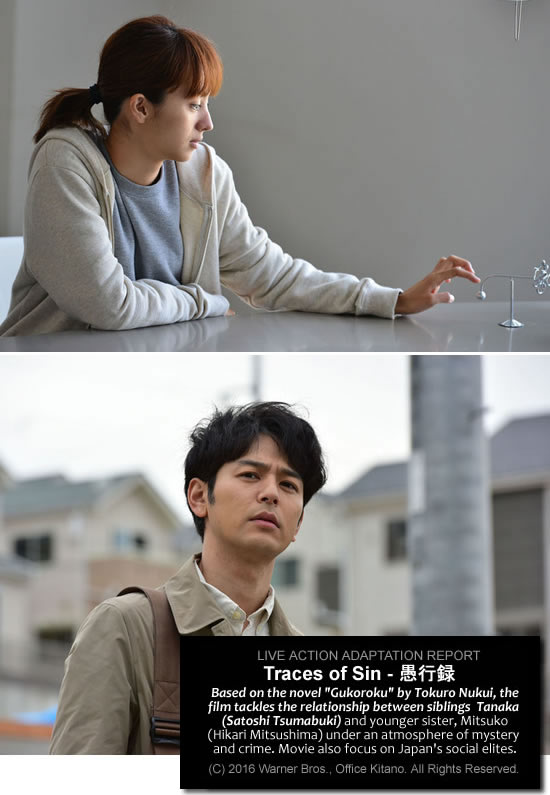 Gukoroku (also known as Traces of Sin) is the reunion of Satoshi Tsumabuki and Hikari Mitsushima on the big screen. Both award-winning actors play siblings in the Tv series Wakamonotachi (together with Eita, a frequent co-star of both).  The movie is the first full-length film of Kei Ishikawa and tackles the issue of a brother-sister relationship in an atmosphere of mystery and crime. Based on the novel “Gukoroku” by Tokuro Nukui, the film also explores social elites in Japan.

Tsumabuki is the kind of actor who does his best when acting together with equally competent players. He did an acting showdown with Kenichi Matsuyama in My Back Page (he plays a journalist, while Matsuyama is an activist during late 1960s Tokyo), this time he’s (once again) a reporter and the trailer already shows some intense moments between him and co-star Hikari Mitsushima.  The film premiered at the 73rd Venice International Film Festival, with Mitsushima showing her fashion flair!

Tanaka (Satoshi Tsumabuki) is going through a tough time trying to support his younger sister Mitsuko (Hikari Mitsushima) , recently arrested and on hold in jail. An investigative reporter, he immerses himself into a story about a shocking murder case gone cold. The “perfect” family – successful businessman, beautiful wife, and adorable child – were brutally murdered a year ago and the case remains unsolved. Tanaka interviews their friends and acquaintances, and as stories of their true nature unfold, he begins to discover that the family was not as ideal as believed. The interviewees themselves unveil their hidden qualities, revealing a disturbing portrait of social elitism. [ source ]

There are also two video clips showing some important scenes from the movie. [ Vimeo links ]

Hikari Mitsushima was quoted as saying that she looks forward to audience’s reactions, especially that the film is Japanese and there is a Polish cinematographer. She validates the same observation and comment made by the director  regarding this particular composition of the movie.

On a separate interview, Kei Ishikawa reacted to a question about his actors, and in particular, about Hikari Mitsushima and he exclaimed that he allowed his actors to improvise and that some suggestions on what to do with certain scenes were made by Mitsushima herself.

Commentaries from the filmmaker:

I remember when I started living in Tokyo about seven years ago, I was struck by the Shibuya crossing. It seemed like people were all rushing about to reach the center of the world without really knowing what or where that is. There isn’t a center point in Tokyo, so people just circle. Everyone keeps walking as part of a massive crowd. This is how I interpret the dynamic of Japanese social cliques. The characters in GUKOROKU, while each admiring, dreaming and striving for that center point, reaching the top, but they end up finding themselves in a downward spiral of nothing. These characters represent a microcosm of Japan today. To me, GUKOROKU is THE GREAT GATSBY of present day Japan, wrapped up in mystery.

I’m from the countryside and I studied up north in university, so I didn’t have any experiences with social cliques. I discovered this more urban phenomenon when I came to Tokyo. Japanese social cliques are somewhat different. In Europe, those social cliques are visible somehow, and you would be pushed out. But here in Japan, they are invisible. Most of the time, such attitudes arise from an inferiority complex.

What attracted me the most about this novel was that it wasn’t written with the intention of becoming a film. It’s a confession style novel with some chapters of interviews, and I knew it would be challenging to adapt it. In other words, we had to invent our way, but because of this, we could put our interpretation in the script. I also liked that it’s not a pure crime mystery novel. Who killed the family is a big twist in the story, but that’s not the point of the story. And my true interest wasn’t there either.

I didn’t imagine a mystery film would be my first feature. My original ideas for a film were mostly dramas and absurd comedies. One of the biggest challenges for me in working with this material was probably when I explained the complex story to my grandmothers… I’m not very picky when it comes to genre. I look for themes and characters. Comedy, sci-fi, it doesn’t matter. My interest is always about how absurd this world can be and how absurdly we live in it.

My film studies in Łódź, Poland, changed my views a lot. When I was making films in Poland, nothing seemed real to me. It was not my language, not my childhood. When I shot a documentary there, the reality turned out surreal and absurd to me. I started to seek out something universal in the subject and characters. Interestingly I had to do the same here as well when making a film in Japan about my culture. I had to look for something universal in this story and characters. I’m not sure if studying in Lodz has added any European tendencies to my filmmaking. I feel that I have been more influenced by Kon Ichikawa’s or Shohei Imamura’s films. I am interested in exploring different frames and more dynamic camera works. I would also like the chance to make features not only in Japan but also in Europe and elsewhere.