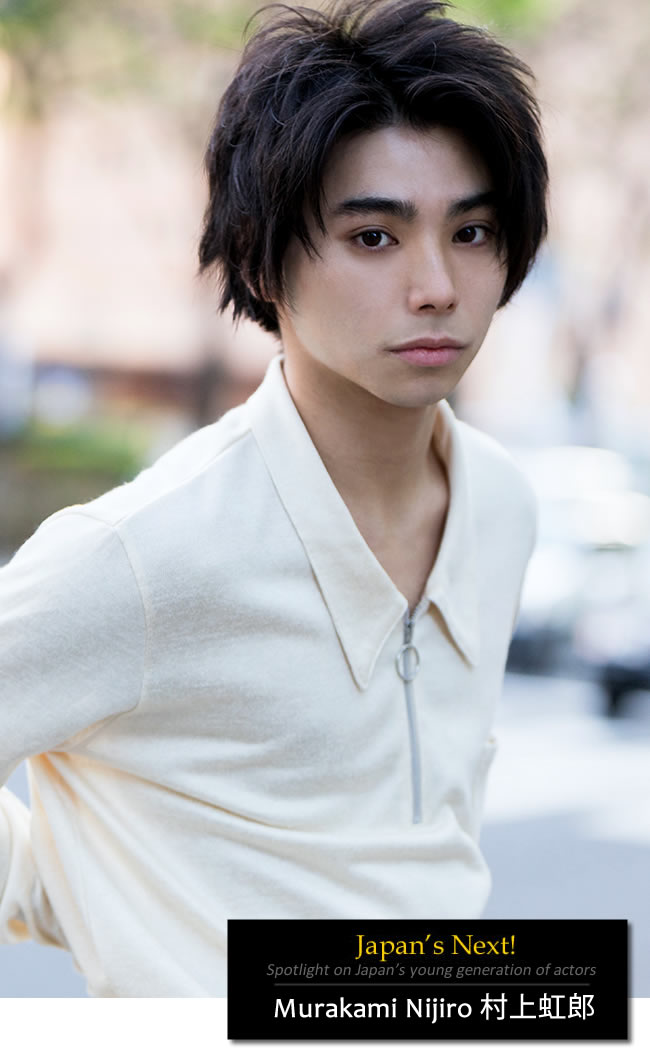 Murakami Nijiro won the Best New Actor award (for Distraction Babies) from the prestigious Kinema Junpo, on their 90th award season, just as Yagira Yuya won Best Actor for the same movie. In retrospect, Yagira was 14 when he won Best Actor (for Koreeda’s Nobody Knows) at Cannes and exactly 10 years later Murakami – at 16 – debuts via Naomi Kawase’s Still The Water.

Why the comparison? They play brothers in Mariko Tetsuya’s Distraction Babies and there is already some indication that the younger Nijiro may follow in Yagira’s footsteps as one of Japan’s top dramatic actors.

While the actor appears to be a bit ‘conscious’ of his acting in his debut, there’s almost a quantum leap of improvement in his acting from the subsequent movie (and drama) to the next – Forget Me Not, Natsumi’s Firefly, Anohana: The Flower We Saw That Day, and Angel’s Knife to the recent Mukoku and Aogeba Toutoshi.

From romancing Hayami Akari in Forget Me Not, to being haunted by the ghost of Meiko (Hamabi Minami) in Anohana, to being one of the delinquents in Angel’s Knife, Murakami’s roles are interesting and varied. In the youth/school drama Aogeba Toutoshi, he transforms himself into an angry young man who was once filled with hope and aspiration. It’s a role you would love to hate, yet there is redemption at the end.

Kumakiri Kazuyoshi’s Mukoku – about the sport of kendo, and Murakami’s coming of age – may be his best performance to date. In my review of Mukoku, I praised the actor:

Of course, the young actor belongs to a family of artists himself, but as the persistent and angry Tooru, he embodies the frustration and helplessness of his character with integrity and truth. The hesitation and self-conscious gestures in previous films are gone. What we have here is an actor in total control of his character. Mukoku is as much Murakami’s breakthrough film as Himizu is Sometani Shota’s or Tomogui is Suda Masaki’s. [read more]

Top 3 acting performances: As Haneda Tooru in Mukoku (definitely a career defining role), as Jintan in Anohana, as the leader of the group of students/band members in Aogeba Toutoshi.

Projected future top performances: As Satoshi in the time-travel movie Nidome no Natsu, Nidoto Aenai Kimi, as Shota in The Miracles of the Namiya General Store – although he is second lead here, Murakami is expected to bring in his A-Game in all dramatic scenes with co-stars Yamada Ryosuke and Hayashi Kento.

Scenes are taken from the movie Mukoku, with Murakami doing rap music.

Tooru (Murakami Nijiro) is a high school student who enjoys rap music, hangs out with his friends, but oftentimes is haunted by his near-death experience of drowning. On his way from school, he was bullied by kendo players but a monk, who happens to be a kendo teacher himself intervened. Complimenting on his posture, the monk encouraged Tooru to join and embrace martial arts. While having second thoughts, the young man soon warms up to the idea. [Mukoku film review]

Murakami exhibited a certain seriousness and nervousness when he was interviewed during the Cannes Film Festival premiere of Naomi Kawase’s Still the Water. He spoke in clear, concise English and related the prestige of the festival with his initiation into the world of movies.

The young actor seems to have a unique fashion sense (could be another Joe Odagiri in the making) but is noted for being inconsistent just like the iconic Odagiri. His Instagram showcases a lot of fashion spreads and personal fashion tastes and some art as well…

Nijirô Murakami gives such a lovely speech in English here – FUTATSUME NO MADO by Naomi KAWASE http://t.co/SY2JFUkfEz via @YouTube

A CM video for JR SKISKI with Suzu Hirose is getting a lot of buzzes – the pair exhibited an amazing on-screen chemistry together. It’s the typical young boys and girls falling in love – Suzu playing hard to get, and Murakami acting nerdy-geeky, yet there is a spark!

Japanese director Naomi Kawase’s rambling rite-of-passage tale opens with a raging sea from which the tattooed body of a drowned man emerges; an accident or a crime? In the wake of this death, our attention turns to two teenagers standing uncertainly upon the shores of adulthood. Kyôko (Jun Yoshinaga) is the strong spirit who plunges into the ocean in her school clothes; Kaito (Nijirô Murakami) is a withdrawn boy who shuns the sea for fear of its “stickiness”. Both are dealing with separation anxieties about their mothers – hers is dying, his is “lecherous” – and both are gradually falling in love. [Review by Mark Kermode @The Guardian]

Nijiro comes from a family of artists. His father is Murakami Jun, while his mother is UA. He is known to perform rap music.

He spent his high school days in Montreal, Canada, the French speaking region.

He won Best New Actor Award (2015) at the 29th Takasaki Film Festival for Still the Water. The Naomi Kawase film participated in Cannes and is Murakami’s debut film.