Dubbed as a coming-of-age, teen romance drama, Hot Gimmick is a film funneled down to a single character’s journey on discovering herself. From a shoujo manga written by Aihara Miki comes a 119-min. experience of discomforting underlying issues veiled beneath quirky camera works. And if I were to squeeze the entirety of this movie, it’d be a hot mess.

Directed by Yamato Yuki (who also served as the director of Drowning Love, aka Oboreru Knife), Hot Gimmick tells the story of Narita Hatsumi (Hori Miona) – a plain Jane high school student with the backbone of a jellyfish. Together with her parents, younger sister Akane, and mellow big brother Shinogu (Mamiya Shotaro), Hatsumi lives a seemingly mundane and aimless life in a company apartment complex. This monotonous routine falls apart the moment Hatsumi buys a pregnancy test for her sister, and finds herself blackmailed by a neighbour, Tachibana Ryoki (Shimizu Hiroya).

The “Emotionally Difficult to Digest” Plot to Review

Things start spiraling down the rabbit hole when Ryoki insists Hatsumi be his personal slave. Troubles arise and continue their merry round the same time Hatsumi’s childhood friend-turned-model, Odagiri Azusa (Itagaki Mizuki), moves back into the same neighborhood. With a smile consistently plastered on his face, Azusa is a clear contrast to Ryoki’s cold, scheming exterior. Being a celebrity, he easily sweeps Hatsumi off her feet.

So, on the surface, Hot Gimmick looks like your typical shoujo manga dreamscape: a story about two guys fighting over one girl – pretty standard when you think about it. Except, it really isn’t. The movie claims to be a coming-of-age story, and therefore provides its audience with the ugly truth often seen in life. It is filled with fickle decisions and wavering emotions ranging from personal insecurities to suppressed anger-turned-revenge, and it wants us to bask in all the filthy messes of unstable teenagehood.

The thing with depicting the realistic, bitter side of Life is that not all films or stories are able to do it the right way. In Hot Gimmick, the overuse of eccentric camera work and dialogues made it seem like a series of alluring vignettes meant to lure its audience. It’s hypnotizing, and because of this, it’s easy to drown ourselves and be mesmerised by it when, in truth, it’s very uncomfortable to swallow.

I’ve seen some people defend this movie, saying that Hot Gimmick is a raw depiction of a teenage girl’s nightmare. Sure, to some extent, I can see where they’re coming from. I sympathise though I can’t empathise or agree wholeheartedly. Case in point being, throughout the film, Hatsumi’s coming-of-age mission extends beyond acknowledging her value as a person.

In fact, her secondary journey involves choosing which of the three guys she’ll end up with – yes, I said three, because at some point Shinogu apparently inserted himself into the group’s already chaotic equation. In a normal setting, this wouldn’t be nauseating to watch, but here the three boys Hatsumi surrounds herself with behave so despicably that the only thing she probably should do is run.

In the meantime, Hatsumi herself is a difficult character to understand. If anything, she’s the character you either sympathise with or scoff at, though I think it’s pretty hard to stay neutral about her personality. As a protagonist, Hatsumi reminds me of a newborn fawn – inexperienced, foolishly naive, and just about ready to be devoured by all the evil in the world. In essence, she also reminds me of The Fool in a Tarot deck. Always confused and mostly sheltered her whole life, she is sure to test your patience.

As for the boys, I think it’s best to jump into the movie without fully knowing what they did. It is only then that their actions release a gush of collision reflecting our current societal issues. My take on this is to observe their behaviours, decisions and actions. Don’t just watch, observe. Reading between the lines would also be very helpful while you do so.

So, without spoiling too much, I would say that the entire execution of Hot Gimmick really disappointed me. While I appreciate how much the film brings forth realistic teenage worries, there seems to be a lack of seriousness to convey what’s wrong with all the sensitive issues – such as revenge-porn, abuse and/or making lewd comments about naive girls like Hatsumi. These are more than just a brief passing for our female protagonist to face adulthood and discover her self-worth, and yet, the film made them seem like a minor thing to advance the plot.

What shocks me even more is the lack of adult presence. There basically was none. Even if we had glimpses of Hatsumi’s mother early on, in my opinion, that was not enough to provide any advisory impact.

Aside from the aforementioned possible controversies, there’s also something about the characters that I can’t seem to stay invested in. Maybe I don’t sympathise with them enough. Maybe it’s because I never had Hatsumi’s naivety. Whatever it is, the entire ride was a rollercoaster of tedious exhaustion where certain scenes felt like a tryhard art-house wannabe.

Hori Miona takes the mantle as Narita Hatsumi, our resident innocent, doe-eyed girl and the titular target for all three boys. As the lead, Hori’s performance is a mix between hit or miss. For me, it’s mostly a miss. A part of me would blame it on the script and the characterisation of her role – which, as we already established, is that meek, naive girl who is confused from start to finish – while the other part of me acknowledges her lack of experience as an actress. Hori is an idol first and foremost, so to be shoved into the limelight for a movie with such an intense plot may have been a little too soon. Of course, she’s not the worst I’ve seen in my entire life, but if she really wants to venture forth into acting it leaves a big room for improvement .

Then, we have Shimizu Hiroya, Itagaki Mizuki and Mamiya Shotaro, who are familiar names, especially to fans of Japanese cinema in general. In contrast to our leading lady, the trio’s portrayals of their respective characters were done in a way as to not outshine Hori’s. I don’t mean that in a way that they underperformed – because they didn’t. It’s just that they’re able to balance things out, and I think that sort of forms a safe circle for Hori’s acting.

Shimizu Hiroya, for instance, was able to deliver Ryoki’s lack of sensitivity and compassion through a poker face that makes him look like he’s dreading every second of his life. Itagaki Mizuki, too, managed to convey Azusa’s double agent nature without looking too forced. The fact that he was able to send disgust crawling down my spine as I watched him smile for the camera is a good sign, though I also blame the character’s toxic and problematic behaviour.

For Mamiya Shotaro, it’s easy to ignore him or his character simply because, unlike the other two, he just doesn’t show up much. Or rather, doesn’t leave much to impress to begin with. Aside from that nice big brother stunt that turns into something near the end of the film, there’s nothing else to say about Mamiya’s character other than okay. He’s not a bad actor, in my opinion; he just doesn’t get to show his fullest potential.

Truthfully, if I were to sum up the cast in a single sentence, it’d be: “balanced and tolerable, fitting for the gloomy tone, but nothing groundbreakingly astonishing.”

If there’s anything worth my time, it’s the movie’s cinematography and camera work. At one point, I even considered the latter to be the powerhouse instead of the plot. Which is bad when you think about it, because that would mean the movie failed to balance itself.

Still, one simply cannot watch Hot Gimmick without talking about the artsy cinematography. Incorporating still images, fast cut scenes and rapid fire dialogue exchange, you’ll either love its manic, quirky touch or snort at its attempt to be aesthetically pleasing. Personally, I enjoyed the peculiarity – probably because it serves as a band-aid to an insufferable story.

Fundamentally, Hot Gimmick is a coming-of-age story. As seen from Hatsumi’s repetitive I don’t know reply throughout the movie, we get a taste of how teenage confusion looks on screen – an idea with a strong potential to flip the empathy switch inside every single one of us. Unfortunately, it fails to do just that.

What could have been an uplifting and empowering message is quickly negated by Hatsumi’s helpless acceptance every single time she’s mocked for being stupid. The manipulative tactics behind whatever the boys did are either ignored or not discussed further. Not only does this movie feel like an antithesis to empower young women, it’s also a possible reminder of how arseholes today are more often than not excused for their behaviour.

At the end of the day, Hot Gimmick is a hazy dream which requires a very specific audience to be able to sit through its distorted plot and disjointed directing. Whether it’s someone who read the manga before or someone who wishes to deconstruct, pinpoint and criticise how problematic it is, it isn’t a simple-easy-watch-to-pass-the-time type of movie and is obviously not a teen romance drama wrapped in pastel-coloured papers with a giant bow on it either. As such, if I have to choose a fixed standpoint, it’d be this: unless you are someone who doesn’t care about the hidden problematic issues within a fictional work (or rejects the notion that fiction and reality do influence each other), I suggest you skip Hot Gimmick in its entirety, and do or watch something more productive instead. 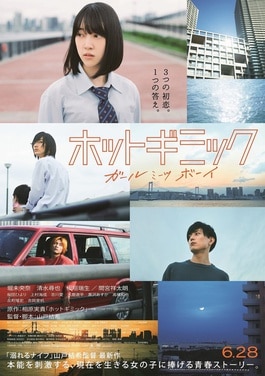 Hot Gimmick: Girl Meets Boy is based on a manga of the same name by Aihara Miki. It started its serialization in December ’00, and ended in August ’05.

It is available worldwide – and with subtitles! – through Netflix!