Every now and then a movie appears I just can’t write a review on. The reason? Generally it just means that there’s way too much to talk about, and that I’d have to go too deep into it to explain certain thoughts. An article like that can ultimately not remain spoiler free, no matter how much I’d try. This year’s Gekijo – also known as Theater/Theatre – is one of those movies.

After watching it and checking some other people’s comments a little after, though, I felt like I had to at least write something. So I ended up throwing my thoughts on Twitter. I didn’t expect it to get much attention but after a few days the tweet was still doing rounds.

To not lose its contents to the twitter void, I decided to turn it into a small article after all. A different sort of review. Something more of a thought piece. Perhaps I’ll continue this for other movies, or perhaps this will be the only one for a long time. We’ll see!

Please do share your own thoughts if you wish to do so!

When you just start watching Gekijo, you’re mainly wondering where the story’s even going, and what it will really be about. Yet in the end, it’s everything and nothing at the same time.

It’s about life. How it isn’t black and white. How everyone reacts to things in their own ways. How everyone has their own feelings and convictions, their own thoughts. It’s about how some people just aren’t meant to be, and, for the biggest part, how we’re all just acting in our own stories.

I’ve seen a lot of hate towards Nagata (played by Yamazaki Kento), our main character, and most of it is certainly justified. What I don’t understand, though, is the idea some people seem to have that he doesn’t regret a thing.

For me it was a given he’s been regretting his actions from the start. He knows things are wrong. That he’s doing things wrong. He just has no idea how to deal with it.

Saying sorry, or the lack thereof

I think a great part of how I digested the whole thing came from Nagata’s comment on saying sorry. He hardly ever apologizes throughout the whole movie, and it really makes sense when you think about it.

He, at the start, said something to the likes of “if a sorry would negate everything that came before, I could tell you the worst stuff and then say sorry afterwards and you’d not be able to be angry with me”. He doesn’t apologize because he knows it’s not enough in comparison with what he’d have to apologize for.

None of this negates the fact that he was an asshole a lot of times, but it gives you insight in how he isn’t inherently bad either. Life simply isn’t black and white.

People are often stuck in their thoughts unable to really explain them, likely because they don’t fully get it themselves. Nagata being self-aware is a great point of that, but him continuously derailing also shows that strong emotions can pull you any side, whether you want them to or not.

The ending, as far as I can see, clearly shows his regret and was a way to show how he knows it was all wrong and she deserved more. It was his way of showing remorse in the only way he knew how to. Too late, of course, but it is there.

Saki (played by Matsuoka Mayu) saying sorry, multiple times, also has different reasons in my opinion, but if I’d go in on those right now I’d probably be spoiling too much.

If anything she clearly feared that reacting would mean breaking her little fantasy that everything was and would be OK in the end.

Gekijo as a story was actually more like a theater show, start to finish. From keeping up appearances – acting/faking that all is fine – to struggling through and being confronted with reality, and eventually the realization of it all. It’s the theater of life.

This isn’t about which side is wrong or right. It isn’t trying to show a perfect little relationship or one that has to pass for it. It’s a showing of how two people who really do care for each other can still not know how to deal with each other and everything around at all.

They both realized in the end.

All in all, I really enjoyed it a lot. It definitely isn’t a movie for everyone, and if you’re expecting romance, you’re better off watching one of Kento’s many shoujos. This isn’t about all that.

If you’re like me, and you love properly written and build up characters, and can sit through something just to see them be, then you will enjoy this movie. If you’re just watching with the idea what you see is what you get, you’ll likely just hate Nagata and call it a day.

In any case, as long as you enjoyed watching it in at least one way or another, and you saw and know that both Kento and Mayu did amazingly well with their roles, then all is good.

And now I’m going to continue being sad that the novel this is based on does not exist in English because I have a mighty need. 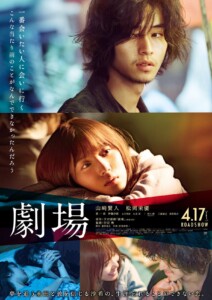 It is available worldwide – and with subtitles! – through Amazon Prime Video.

The original thread can be found here: