Bored. Boring. It’s something that comes back in a variety of ways and places during the movie’s near two hour run. Whether it’s main lead Ishii Yuji’s (Fujiwara Kisetsu) existence where everything just seems to be stuck in mediocrity, his repetitive side job, or the subjects of day-to-day conversations with people just trying to figure out small talk – including with his ex-girlfriend he still lives with since neither of them can seem to get themselves to move out. But at the same time there’s also the memory of his old upbeat high school classmate, Sasaki, calling him such on multiple occasions.

The titular Sasaki (Hosokawa Gaku), on the other hand, is a clear showing of a class clown who wants nothing but the smiles of his friends and classmates around him, as well as the attention and support of them as they occasionally cheer him on – or perhaps, lure him out.

The movie starts off in the present, showing how Yuji’s stuck in an acting career where little seems to be going for him, and himself clearly not knowing what to do with it or having any motivation to even try. While his factory job gives him money needed to make ends meet in-between acting jobs, it’s not an ideal situation, and it also doesn’t help to improve his troubled mood. It is only when a fellow actor (Murakami Nijiro), whose career finally seems to be on track, lures him in with acting praise and a script of a new project he’s working on, that Yuji gives a hint of being interested in anything at all.

What begins with an accidental encounter between our main lead and another old high school friend, Tada (Yuya Shintaro), ends up in a fight and a reminder that perhaps Yuji’s living his life with a slight influence of their mutual ex-classmate. The guy gets amused, remembering certain bits and parts of Sasaki and his daily shenanigans, and promptly seems to get him – or at least some inkling of his existence – stuck in his head again. Or, I guess, in his mind.

The movie continuously flips between several timelines, cleverly giving backup to certain reasonings, thoughts, or events happening in the now by visually going back to what it relates to in the past. We get told about the dynamics between the four high school friends, things that went on at the time, and how it all clearly lingered around a lot more than they seemed to have realized while growing up.

It’s only after a while that we learn the reason Yuji ever got into acting, for instance, was nothing but a random comment from that same Sasaki, and despite saying how he’s a boring person at times, he should go into acting after graduation. The memory of it showing up again results in Yuji letting himself be pulled along his fellow actor’s earlier wishes, as he gives in and joins the guy’s stage play project.

Alongside the practice – and because of the play’s main subject – Yuji’s mind gets even more lost to the past, as he’s forced to confront thoughts which have been hanging around for quite a while but weren’t ever really given a place. There is clearly some blame or guilt involved, and the more he gets himself to continue, the more he needs to find his way among the memories and feelings.

Despite Sasaki seemingly having been the comic relief kind of guy of their childhood friend group, it’s of course never that simple. The more we learn about him from the flashback sequences, the more we learn the guy had his own hurdles to get past, and how he seemed to rather hide any of it than to come clean and ask for support. When a lifechanging event happened, and he tried to act like it’s nothing, his friends aren’t joining him in the sentiment, getting upset in his place instead. The change messes even more with Sasaki, and the fact he might need them more than they need him is probably the clearest at that moment.

It doesn’t feel like their friendship ever went back to what it had been before that though, and after graduation they all went their own ways, doing their own things. Life, however, doesn’t always go as planned, and random events happen on the daily. It’s those random events that eventually bring them to meet again, and it’s clear that no matter what, Sasaki is still a subject with a big presence on their mind. Something which will likely never really leave, and they will just have to learn how to live with instead.

I’ve been thinking for a while about what to say concerning the cast but, honestly, there isn’t much to say about anyone but Sasaki and Yuji’s actors – Hosokawa Gaku and Fujiwara Kisetsu, respectively.

Hosokawa embodies the character “Sasaki” to such a degree you start wondering whether the person the whole story was based on wasn’t really his classmate but him himself. It’s total chaos, and despite not being the actual main character, a titular role is enough for him to stick in your mind no matter what scene it is he appears in. Perhaps it’s the selflessness of the character, or simply Hosokawa being so into it he just drags you along – which feels like it’s the whole purpose of the character anyway.

Meanwhile Fujiwara shows once again he’s pretty much a natural when it comes to acting. There’s something really flowy about most of the things I’ve seen him in so far, and it isn’t any different for this movie where it just feels like we’re seeing parts of the life of an existing human being called Ishii Yuji rather than just another role. It goes as far as being in straight contrast with Murakami Nijiro‘s appearance. The young actor is supposed to play an old friend or acquaintance of Yuji’s who asks the guy to act alongside him for his newest stage play. But sadly, Nijiro doesn’t really get to step outside of being his own actor self, and even when Fujiwara is acting that he’s acting, he easily beats Nijiro’s whole existence in the few scenes they have together.

Sasaki’s still on my mind

There is one scene specifically that I won’t ever be able to get out of my head, and it is nothing but Yuji carrying the newborn of one of his ex-classmates near the end of the movie. As the child feels – and likely sees – a new person, it gets uneasy. Just about as uneasy as Yuji already is with holding a child he barely got to acknowledge existing. The little one starts crying, and it goes on and on and on. No matter how hard Yuji tries to get the kid at ease, it doesn’t seem to work at all, till there’s nothing left for the guy but to join down its spiral, and the tears just burst through. He – likely for the first time during the whole story – gives in to his emotions, and just lets them run as he runs along with them. He keeps going, and going, and going, till his mind gives him a moment, and he manages to have it clear up at least some. And then the realization hits, it’s time to say goodbye.

The movie basically started off where it ends, going full circle. After all that’s happened our lead guy finally takes a step past all of which had been holding him back, and reaches for the new times ahead. All of that (in)directly powered by the thoughts and support of that one friend who often felt like nothing but the class clown, but with whom Yuji seemed to have always had a deeper bond of understanding.

In a way it feels like Sasaki in my mind is a movie about nothing and everything at the same time. How a seemingly meaningless event from back in the main lead’s high school days eventually ends up giving him and his friends a lesson in moving on so many years later.

Maybe in the end it’s just about how it’s fine to live your life while going with the flow, without it having a real big purpose. That there’s random stuff pulling us along at all given times, and that the smallest things can give the most support or entertainment.

Or maybe it’s just about how life will be messy, no matter what, and that if we are letting ourselves get stuck onto the details, we’re never going to be able to live our lives to the fullest – no matter how and what that might be – at all.

Perhaps it’s just both. Some things you won’t ever be able to get completely off your mind anyway, no matter how much you’d want them to disappear. You just learn to live with those memories and thoughts, and move on. Step forward with it sitting in some box on an imaginary shelf in the corner of your mind, because it’s a part of you, forever. 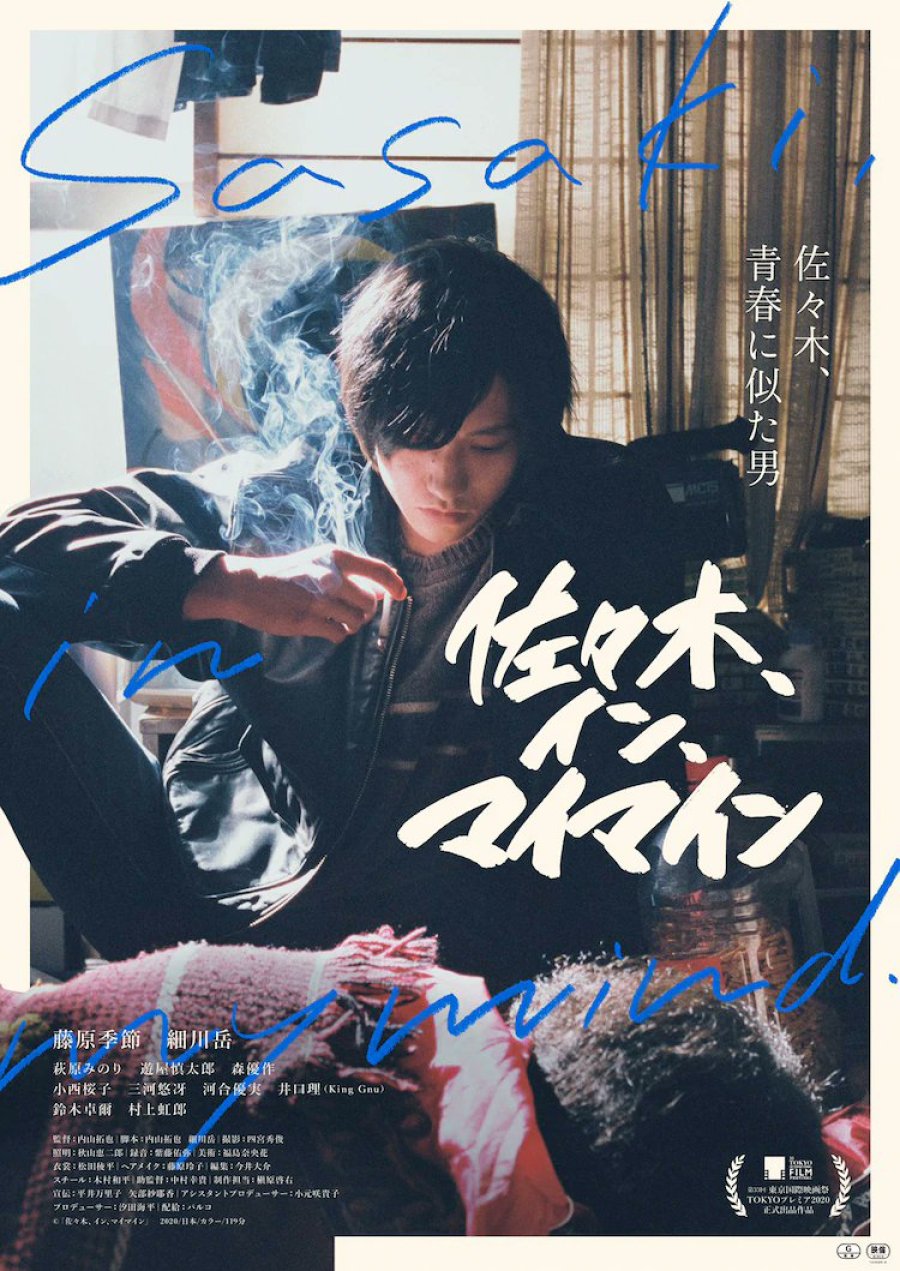 Sasaki in my mind first started as a project between director Uchiyama Takuya and actor Hosokawa Gaku, after the latter had already worked with Uchiyama on his first film Vanitas. Hosokawa came up with the idea after having been reminded of an old classmate of his own, and taking that as a base, they eventually worked out a whole original screenplay from it.