It’s been a long time coming, but it’s here. News of the Sato Shinsuke directed adaptation was already revealed back in July 2019, but while the names of its lead cast were released barely a few weeks after, it took another full year before we’d get anything new about the series. A 14 member support cast and release date later, we’ve finally made it. Welcome to the Borderlands.

The Netflix funded LA drama adaptation of Aso Haro’s manga series Imawa no Kuni no Alice – better known in English as Alice in Borderland – saw its release on December 10th, 2020. Starring as Arisu (Alice) and Usagi are Yamazaki Kento and Tsuchiya Tao, in what is their first time working together since 2015’s Asadora Mare as well as the Orange LA movie.

Quite literally. Arisu Ryohei is a gamer – and a random knowledge collector on the side – and they’re sure to let us know by showing us around the guy’s room while he’s getting frustrated by whichever FPS he’s spending his time on. When his younger brother then comes to nag about living a more proper life than he’s been doing ever since their mother passed away, he’s completely done. Some fresh air is most certainly needed.

The rather free-spirited tone of the character is quickly set as we start skipping from Arisu to his friends, Chota and Karube, in a montage of scenes put to messages being sent around a group chat. While Karube (Machida Keita) quite literally has his hands full with his love interest, Chota (Morinaga Yuki) seems to be stuck with a mother requesting him to pay up for her own expenses despite him telling her he wants to stop doing so. Their circumstances, subsequent moods, and Arisu’s continuing messages have them ready for a drink, and where else do you – apparently – meet up but busy Shibuya Crossing?

Soon after finding each other – and after a short conversation about leaving their daily lives behind – the three are lost in thought for a while, just staring into the distance over a buzzing Shibuya Crossing. That is until Karube lifts an unknowing Arisu on his shoulders, and starts running around the famous crossing while Chota is likely trying to film it all. That – and the eventual consequences of their thoughtless behavior – clearly shows us all we need to know about our current main three: to be free of worries, and living a fun existence, is likely all they’d wish for. But as with any series – and especially a live action – the only purpose of such a sequence is of course nothing but to shock the characters as well as watchers into the actual premise of the show. So when the lights go out, electrical appliances stop working, and every single human being has vanished from a city that basically never sleeps, you know something’s coming.

Despite a slight bit of despair crawling up once they realize they can’t find any other living person, Chota and Arisu quickly see some light in their darkened situation though, thinking they might finally get to be free of society’s chains. It’s only Karube who’s a little more realistic at the time. As he does his best to try and get the other two to face their dire situation a, by then, pitch black Shibuya lights up again. Giant led screens otherwise used for flashy ads finally give them a hint of what’s happening, and eventually show them the way to start their new occupation as subjects in a game of life and death.

And let that last bit be exactly the main idea behind the first game they encounter: if there’s a door in front of you with the label death and another one that says life, which one would you go for? Together with a newly arrived contestant, Shibuki (Misaki Ayame), our trio heads down the rooms one by one to try and find a way out. With time being precious, and with each step ahead the time to think becoming less, a wrong choice means death is a certainty. But just how well do people function under pressure when their life’s at stake?

Yamazaki Kento is back in manga LA land after his drama outing, and it goes to show he’s still a really wanted lead. There is no denying he fits the profile in this case either, and he easily enough brings Arisu Ryohei to life throughout the first episode. Whether or not Kento will be as convincing till the end we will only know once we get to watch the series in full, but for now he’s been satisfying enough to the point I won’t immediately go into despair when thinking about how the upcoming games will go. This goes for Machida Keita and Morinaga Yuki as well, by the way. Though I don’t remember every single detail from the manga and OVA – it’s been quite a few years by now – their casting didn’t make any question marks pop out of my head as some others do on the regular. Both actors easily manage to convince me of their characters – with and without changes – and I’m somewhat certain they’ll continue to do so for the rest of the show.

Meanwhile, when it comes to the setting, busy Shibuya made me go Oh, so lively! and a little nostalgic about having walked around there myself before, though it quickly changed to a was this recorded on a set? when it shifted to being completely deserted. And, to be fair, it wasn’t because I knew that it was, or because I expected it – I mean, getting Shibuya empty is near impossible after all – but because the background just felt slightly dead of sorts. At least Alice in Borderland has one-upped any other project in that regard as in this setting you can make complete sense out of it, whether or not it was a conscious choice. I mean, it likely is an alternate/virtual version of Shibuya, isn’t it?

Now, I do have to be fair to the drama itself: the fact it was filmed with such high quality cameras – as far as I’m aware it’s 4K! – probably adds to it feeling a bit too sharp at times. I’m used to a more raw look and not the type of visual media where, if you’d want, you could go counting someone’s pores! So far the series also manages to stay clear from one of the biggest issues often spot when it comes to director Sato Shinsuke’s projects: its emptiness in the background. Considering that the Borderlands are supposed to be mostly empty, I guess that’s an advantage to him this time, and one less detail to worry about. Hopefully the rest of the episodes manage to continue the same solidness – though those few clearly rope and CGI-involved jumps from the trailers don’t exactly give me too much hope.

Hm, it’s safe to say that while it stands as an LA so far, it also doesn’t at the same time. The most obvious example of a difference between the base material and the live action drama, for instance, is that the third year high schoolers are no more. Instead, our lead trio is already – supposed to be at least – part of the working force. Now, for this adaptation, it actually makes sense in a way, and that’s also why I’m not even going to question the idea behind the change. 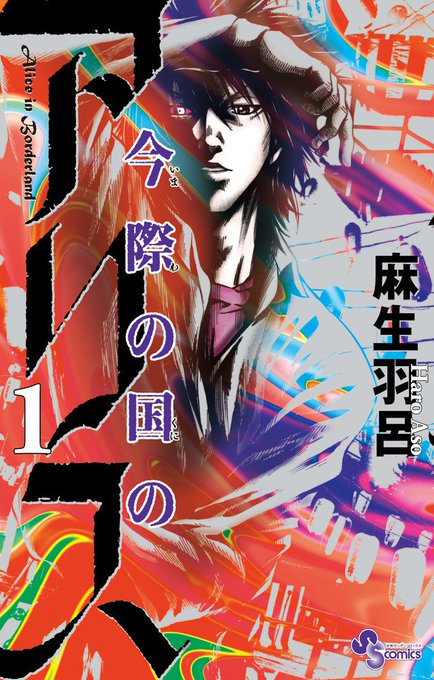 Along with the upped ages, most of the first episode is brand new material. From the way they get pulled into the Borderlands and the look of deserted Tokyo, to how they discover its first game, get stuck in it, and eventually challenge it. It’s all different from the manga and OVA. Smaller changes like going from paper visa to using smartphones, with all their information ready whenever they step into another game, is a clever trick to bring the premise to current times at least – though I don’t think the environment is going to enjoy the throwaway phone concept. But it’s when you start thinking about the first game, it gets a little confusing.

Rather than being set at a shrine festival, with music and food luring Chota and Arisu within its borders, the game moved to a more basic looking one in an older building where each room they step into only leaves them with a choice between life and death. There’s much less engagement. Much less of an oh no if I don’t solve this problem I will die feeling. Instead it’s become more of a how do I calm myself down and get rational about this event. It flipped from being a mind game where the answer was hidden in a whole series of words and problems to the simpleness of life or death stuck to a door and having to think beyond the spot they are standing at to even have a possibility of making it out alive.

It’s only when you know the story at little, there’s some things you can spot being similar or at least related to the manga version – think: directions. When looking at it from outside the actual setting, for instance, it makes it seem like they stripped the original game down to its basic structure and went with a different approach from there. The written-problems-to-solve side might be gone, but the mental and mind games are still fully present. And when you think about it, there’s probably much more instant suspense to be gathered from a yes or no type of intro game where the wrong choice means instant death than there would have been if they’d gone with the shrine level. And if there’s anything a big production wants to do, it’s to keep the viewers watching, isn’t it?

Or, well, I guess it could have also just been a budget related choice, or maybe the team didn’t like the idea of festivals, food, and flaming arrows, but what do we know? Begone, arrows! We only want fire now~

All in all, there isn’t much to be said based on the first episode alone. They did a good job with setting the atmosphere, as well as launching us into deadly games, though not without switching around the base material. And so far, it works. It keeps you entertained. The only thing left to do after episode one is to continue on to episode two, and enjoy the ride without thinking too much of what could have been and why it isn’t there or was done a different way. At least it got my attention for now.

Be sure to stay alive a little longer, Arisu Ryohei. Don’t die before I get back to watch the rest.

Oh, and one more thing… The first episode might have given me the creepiest vibe I’ve felt in a while and it was something as simple as the fact Tokyo – and mainly Shibuya Crossing – is devoid of human beings. Now imagine that.

Imawa no Kuni no Alice is based on a manga of the same name by Aso Haro. It started its serialization in ’10, and ended in ’16. A three-part OVA with VA Hosoya Yoshimasa voicing Arisu was released in ’14-15.

It is available worldwide – and with subtitles! – through Netflix!