Ajin: Demi-Human is a manga series by Sakurai Gamon, which was also adapted into two anime seasons and multiple animated movies before. Since I have not watched nor read anything of it, I went into the live-action blind.

The film follows the story of Nagai Kei (played by Sato Takeru) who gets into a car accident which confronts him with his status as an Ajin, an immortal capable of regenerating back once they ‘die’.

The catch is that Ajin are considered dangerous by humans due to their relative invincibility. They are outcasts, feared and hunted by the rest of society while being used as lab rats by the government. After ending up in a – quite literally – sticky situation, Kei gets rescued and meets another Ajin named Sato (played by Ayano Go). Sato offers to help Kei, but when he learns the guy is a terrorist with a plan to murder humans, he hesitates. 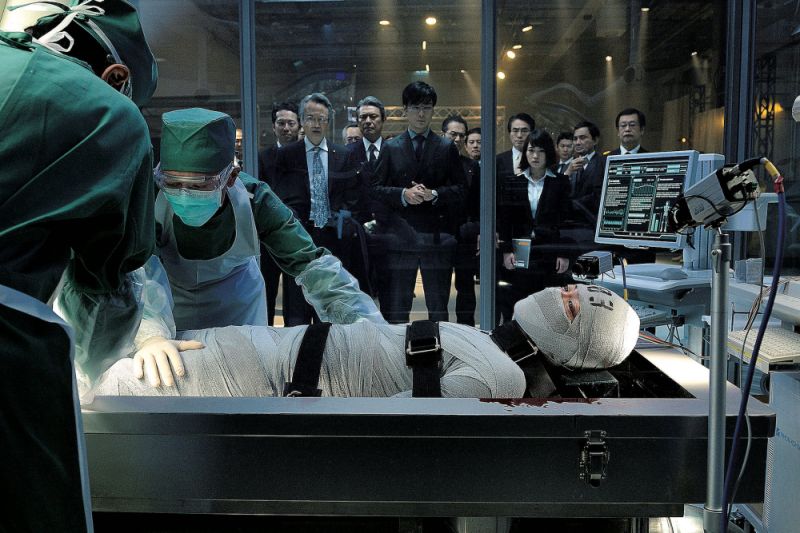 The film began with a cold open, swiftly establishing the conflict between the Japanese government and the Ajin. A captive Kei was shown undergoing inhumane experiments such as amputation all while high-ranking official Tosaki Yuu (Tamayama Tetsuji) and his secretary Shimomura Izumi (Kawaei Rina) observed the process from afar. At the same time, Sato and Tanaka (Shirota Yuu) – Ajin that chose the path of revenge and decided to terrorise humans – attacked the facility where Kei was held. They had heard about him and came to the rescue, massacring the facility personnel on their way in just as Sato had done years earlier when he rescued Tanaka from the very same facility. As soon as they were noticed, Tosaki evacuated the high-level officials and locked down the building with orders to eliminate the intruders.

Initially, Kei did not have much of a reaction to the massacre as he was mostly seething with anger at his mistreatment and still grappling with his regained freedom. However, when asked to join Sato and Tanaka our main character didn’t feel comfortable doing so and decided to follow his heart and not join in, reasoning that there was no gain in killing humans. This decision set Kei and Sato’s team against one another for the rest of the film. Sato was eager to prove that Ajin and humans could never co-exist in peace and wanted to terrorise society in revenge for the abuse he and his team had suffered. Kei, on the other hand, formed a grudging alliance with his former abusers – the Japanese government, which Tosaki represented. The conflict between both became the film’s main theme, alongside Sato’s increasing displays of brutality and inhumane acts.

Given its nature as an action film, Ajin: Demi-Human had a lot of focus on combat. Unfortunately, there was not as much plot and substance. What was initially interesting quickly gave way to fatigue under the tired drilling of action scenes into one’s face, showing the plot was rather bare-bones when stripped down to the core. What you saw in the trailer was what you got, so in a way, they did deliver their promise of plenty of showdowns. A moment I particularly enjoyed was the part where Kei exploited the particulate nature of Ajin to outsmart the villains, but Ayano out-maneuvered him in turn in an even more spectacular manner. Nonetheless, I wish that Ajin had had a more interesting storyline instead of ironically becoming an endless loop of death and resurrection, much like its own definition. The fights were average. Entertaining enough, but nothing eye-catching. The choreography was not particularly outstanding but the high physical calibre of the cast ensured that the quality of execution was there. If Rurouni Kenshin’s choreography deserved a 10/10, Ajin was a 6-7/10.

The most used track was the gym-appropriate track in the trailer. Though mostly relying on the same old track, it fitted surprisingly well with the vibe of the film. A complicated soundtrack is not required if a limited one can be used effectively during the right occasions. 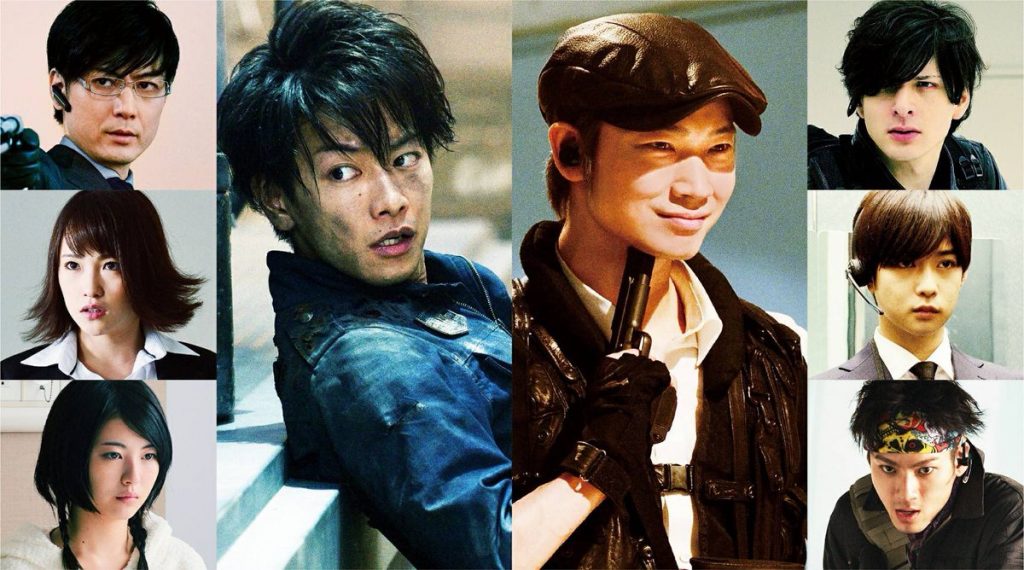 Acting-wise, there was nothing very outstanding. Although the actors were not given many chances to actually ‘act’, they tried their best to give performances within the given limits. Takeru and Ayano got most of the opportunities but the rest missed their part of the spotlight. Overall, the acting was simply not very memorable in comparison to the ever present action. 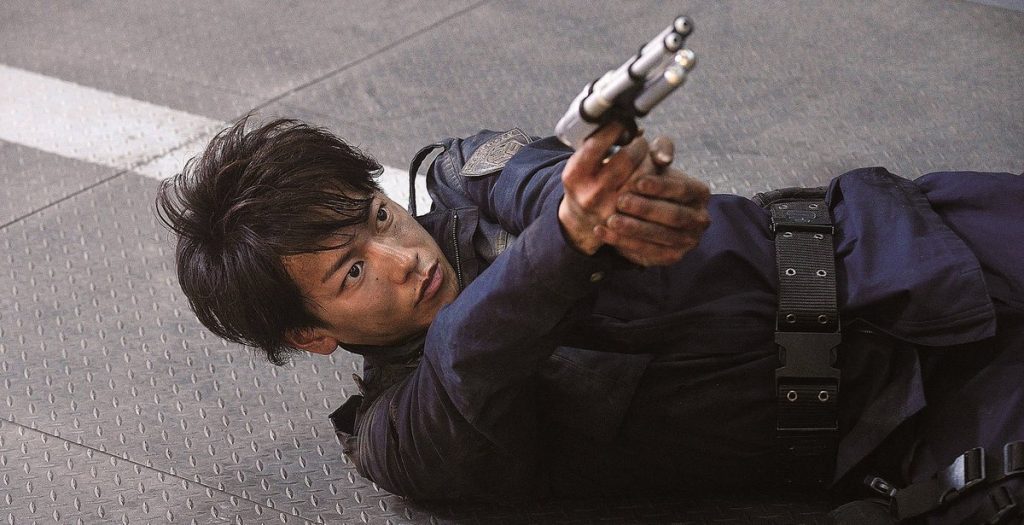 Takeru was easily the actor with the best performance, but even his parts were not very layered due to the limited material he could work with. There was only so much to be done with scenes that had a greater ratio of action to actual character-building moments. The role was not too challenging for him either since it was slightly similar to his calm and logical personality. Takeru’s performance could have gone to even higher levels judging from other performances that we’ve had the chance to see him in, but alas, he was constrained by the film’s focus on action over substance.

Ayano portrayed a twisted character, but the character fell flat for me somehow. He displayed an ominous sort of creepiness with a selection of twisted smiles. It was a masterclass on how to present different states of minds and types of purpose through a smile, and a solid demonstration of the subtle differences within the spectrum of smiles broadly classified under the ‘twisted’ category. This was initially successful in crafting Sato’s sinister presence but it eventually got monotonous. At least it was clear that the issue lied more in the existence of endless high-intensity action rather than with Ayano himself.

The same issues persisted with the rest of the cast and ended up looking even even more enlarged since there was a clear difference in focus with the leads, who already lacked expansion on their characters despite relatively greater amounts of screen time.

There were moments when Tanaka also gave off a sinister aura, and I was glad that Shirota was able to give a restrained performance in Ajin. The stability and coolness of Shirota’s Tanaka was a good balance to the underlying current of craziness in Ayano’s Sato and he also delivered when he was required to unleash the more unhinged side of his character. 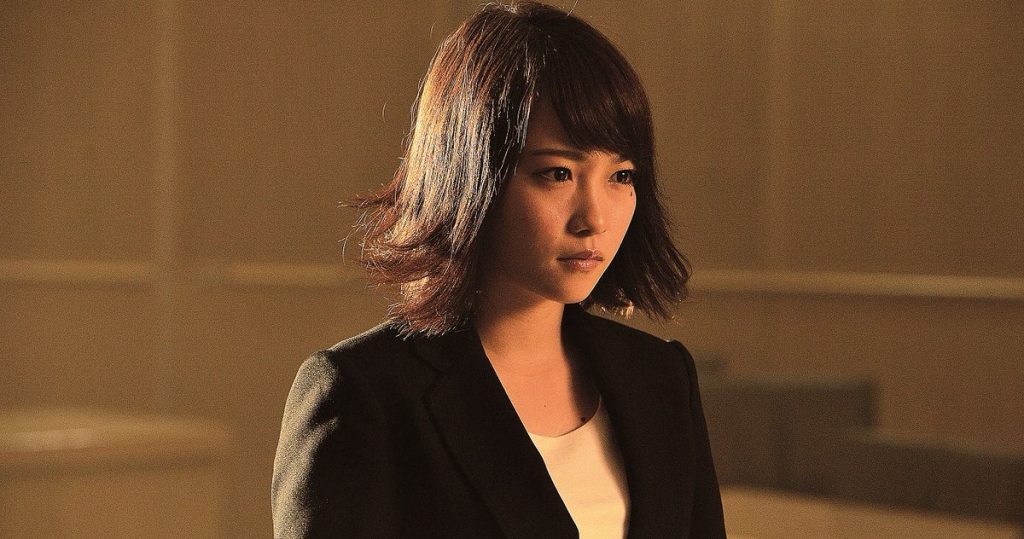 There was not much opportunity for Kawaei to stand out and it was hampered by the fact that her character mostly acted as a support to Tosaki – though I did like a subtle reaction that she did in response to his surprising willingness to work with Kei. I am still uncertain about her full level of ability as I have not watched much of her on-screen, but she has been on the rise of late with many projects announced for 2018 and 2019. As one of the more attention-receiving members of the new generation, Kawaei is someone to keep an eye on.

Hamabe was forgettable. There are no comments simply because there was nothing much worth commenting on. For all we know, the actress and her character could have been taken out of the film and no one would notice. Oh wait. She was suppose to be a reason for an Ajin attack. I forgot. 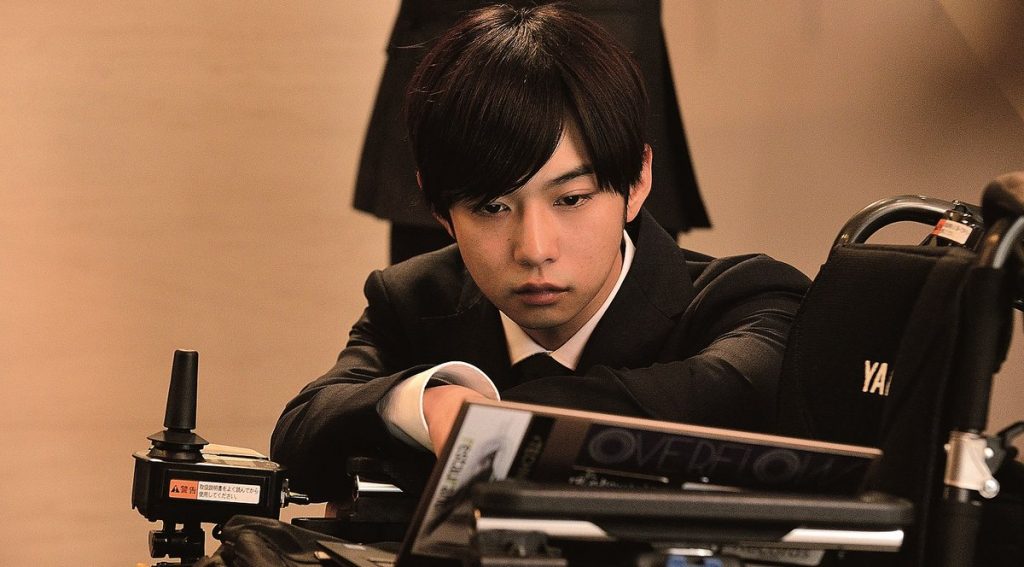 Chiba gave off this quiet unsettling feel as Okuyama but was not given much to do. I was expecting something to happen. He had a couple of scenes where he infiltrated a building and set up traps, but he got stopped rather abruptly. Chiba’s part then ended after all the build up and intentional camera work on him and left me feeling very confused. It’s like finding a diamond after a lengthy mining and extraction process and proceeding to discard it into the trash can. That said, props to his acting. Without any explicit brutal activity as opposed to the rest of his fellow group members, Chiba still unnerved me with his portrayal of Okuyama.

Yamada Yuki’s side role was accorded an amount of attention that lay above the rest of Sato’s lackeys and slightly below that of Okuyama. Despite that, him and the rest of the gang were reduced to just being odd people who were twistedly exhilarated and turned on by the idea of killing. How they came to have such behaviour was left unexplained and did not make sense since it was presumed that they were normal civilians before joining Ayano. There is always this odd Japanese manga tendency of having characters like this and it is possible to make such characters work even in live-action films, but Ajin was an example of how it was poorly done. Thankfully, Yamada managed to rein it in and balance the crazed with a suitable dosage of reality.

Ajin: Demi-Human felt more like a crazy game of airsoft between a team of friends with the exception that everyone was immortal. It was nice enough as an action film, but I would not encourage expending too many brain cells on trying to dig up some deeper meaning from the film. As mentioned earlier, it devolved into endless loops much like the Ajin’s neverending ‘Reset’. I only remembered fighting, fighting, and more fighting, peppered with chill beats of music and followed by more fighting – an occasional great moment by Takeru – more fighting, cool uniforms, cool guns, cool music, and yes, more Takeru. Sounds tiring? You bet it was. Add to that an unexpectedly cheesy and embarrassing usage of computer graphics right at the end of the film and it seems like it is also time for me to reset my memory of this whole affair.