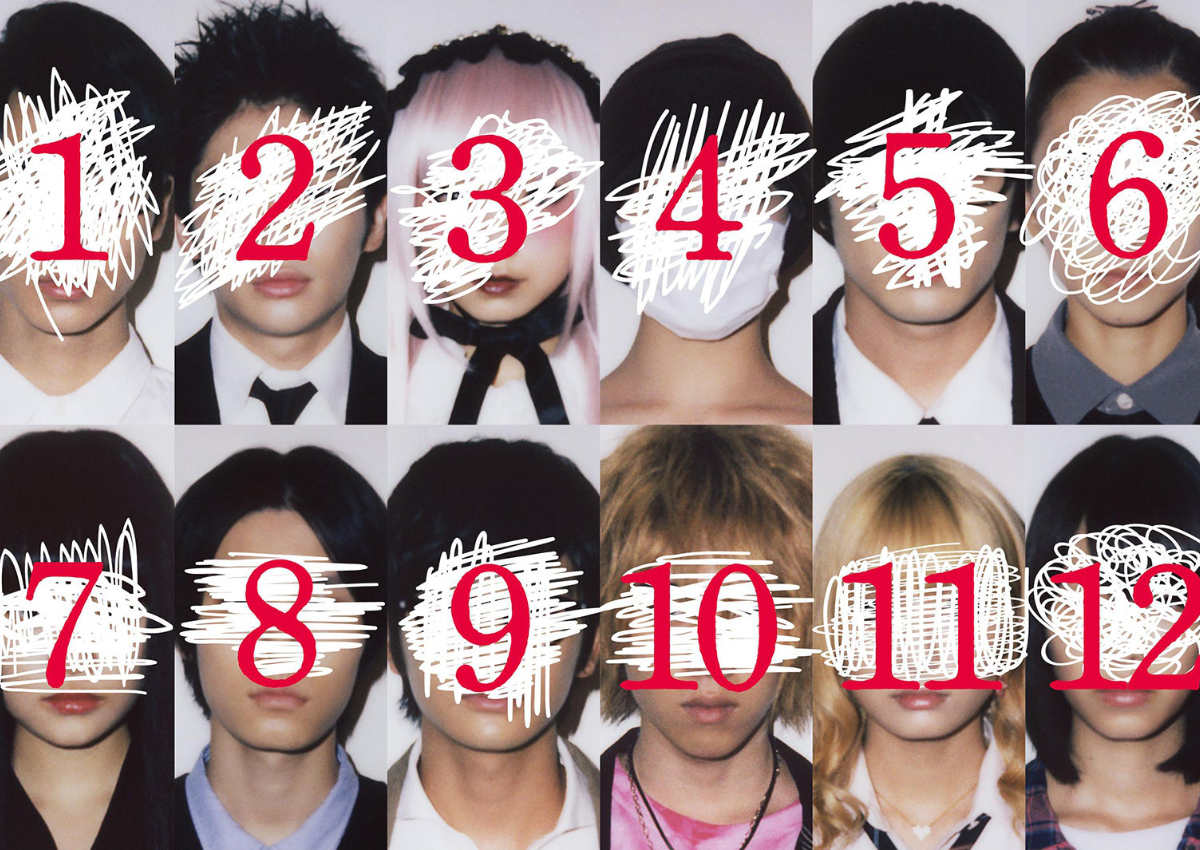 What happens when you put 12 suicidal teens in a building together, when all they hope for is never coming back?

12nin no Shinitai Kodomotachi (12nin), or literally Twelve Children Who Want to Die (official English title: 12 Suicidal Children), is an early 2019 movie by director Tsutsumi Yukihiko. It was based on a novel by Ubukata Tow – who is probably more known for his anime related work such as the Soukyuu no Fafner series and Mardock Scramble – and adapted to a script by Kuramochi Yutaka. But it wasn’t any of those names that got the interest of the big internet crowd.

Sometime 2018, Twitter launched its own little mystery, as a whole twelve member cast was revealed without actually revealing them. Before we well realized, everyone was stuck in their own little investigations to the point that birthmarks and picture comparisons were the most important revelations for days. As the numbers slowly became names, and eventually a cast reveal showed that most people at least had guessed part of them right, expectations also rose. We didn’t get just one or two leading names of the upcoming generation, but at least about half a cast while another six were added in the form of lesser known names and rookies with potential. And maybe it was even that side of the whole thing that impressed me most.

People going into 12nin with the idea it’s a regular murder mystery or even a battle royal type game will soon realize it’s one of its own kind instead. Sure, there is a mystery to be solved – who is that extra dead kid in the room and where did he come from – but it’s not as suspenseful as one would expect. 12nin basically revolves around a gathering of people with the same end goal: death. Twelve teens who’ve signed up online to be a part of a joint suicide. Despite their own separate reasons being very different, the story keeps flowing on its set wave from start to finish and easily puts all mystery’s puzzle pieces together so that when we pass another number down the list, their story just fills up another empty spot.

There aren’t any big backgrounds to see or learn about, but we get the motives, the thoughts, and the understanding from people around – well, for some of them at least. We get the frustration, the warped mindsets, and the feelings that brought them there. And when all is out on the table, and everyone has come clean, there’s the confrontation. With themselves as human beings, with others gathered around, and perhaps also a little bit with the world as a whole.

Whether or not the story itself is something for you, I think we can all agree on the killer casting for it. Takasugi Mahiro easily takes the lead as Satoshi, keeping his poker face intact through the whole movie. It’s only a mere few times where you can see the hints oh so slightly appear on his face, serving as a good reminder for his usual subtleness. Arata Mackenyu, Kitamura Takumi, and Sugisaki Hana easily add to the power, each fulfilling their parts – Shinjiro, Nobuo, and Anri, respectively – to the finest points. Especially Sugisaki stands out on that end. But there’s also Hashimoto Kanna (Ryoko) and Kuroshima Yuina (Meiko) who certainly can’t be forgotten. While, I’ll admit, Kuroshima annoyed me for literally most of the movie – as her character was obviously meant to do, so she gets full points on that – Hashimoto Kanna surprised me. She’s certainly stepping away from her idol actress days and with every project I see her in, she’s grown at least a little. Enough for me to keep some attention on her future project choices.

Now while the previous six have always been thought of as the main attraction of the movie, the other half of the cast certainly didn’t have to give in. On the male end, Fuchino Yuto, Hagiwara Riku, and Bando Ryota were all names I was already familiar with so for me they easily added up to the anticipation. And even though none of the girls’ names rang any bells – not until I looked up Yoshikawa Ai at least – they fit their roles very nicely and only added to the already solid cast.

While Fuchino Yuto (Top Right) has little on his filmography and more credits on the theater side, I’m sure a good load of people actually do know him. A few years ago he was cast in the Hyper Projection Haikyuu!! Stage Play as fan favorite libero Nishinoya Yuu. He played the character for three theater runs spread over two years before saying goodbye to the project along with the rest of the main cast. Looking at his works for the past year I can certainly say 2019 is probably his proper start in the drama and movie world, so keep your eyes open and you might see him around quicker than you’d think.

And since we’re talking about proper career starts, Bando Ryota (Bottom Right) is in a similar situation. The 22-year-old technically debuted at the end of 2017 but it’s been the past year that’s brought him the most exposure. People who’ve watched Perfect World might even recognize him as the younger version of lead Matsuzaka Tori – for which he was selected as one of ModelPress’s “Next Break” young actors.

Hagiwara Riku (Middle Right), on the other hand, has a whole ten years of acting behind him. Though it seems most of his roles are simple drama guestings or side roles in movies, it all adds to a decade of experience despite only having turned 20 this year. For people wondering where they might have seeen his face last: he was part of the 3 Nen A Gumi drama and led Denei Shojo: Video Girl Mai. Both came out earlier this year.

Yoshikawa Ai (Middle Left) might be more known to the masses as Yoshida Riko. The child actress took a break from acting to focus on school, and came back a year later under a different name and agency. As with Hagiwara, her career spans more than 10 years by now, and even though most of her filmography consists out of projects from before her break, she’s been steadily adding to the list.

Both Takeuchi Aisa (Bottom Left) and Furukawa Kotone (Top Left), on the other hand, have only been around since 2017 and 2018 respectively. The former has appeared in a few movies and drama series so far, with Takane to Hana – opposite fellow 12nin cast member Takasugi Mahiro (they belong to counterparts of the same agency as well) – being the most recent one. At the same time, Furukawa seems to be working herself more into the alternative circuit, starring in movies such as Chiwawa and 21st Century Girl, the latter alongside agencymate Kadowaki Mugi. Though if you’ve been watching Sagideka lately, you’ll have seen her there as well.

As a result, 12nin was a pleasant surprise. In regular cases you’d get a movie like this led by a few upcoming names and faces with the rest of the roles filled with little known rookies who, more often than not, still have to get used to acting and kind of fail to make a mark. This time, however, I never felt any of that. Whether it were the already established names, the upcoming ones, or the actual rookies, every single one of them slipped into their own character very easily. Very naturally too. There was never a moment for me to pause and wonder how and why someone got their role. It just all felt right. Add to that, that the cast consists out of similar aged people born between ’95 and ’99 (aside from Takeuchi, who’s born in ’01), and maybe we can even find an explanation of why it all worked so well. You get unknowingly swept up from the start, and with all the actors fitting their characters so nicely, you don’t really have to think about much. Just enjoy the ride.

In the end it’s all just about twelve teens who’ve come together to die, though perhaps the title made that clear already.

K-Note: I wouldn’t be me if I didn’t have a recommendation to make. Personally, I’d keep an eye on Bando Ryota. It’s not the first time I’ve seen him around, though it might have been his biggest role so far. There’s an inkling of the eyes, the stare, and at the same time already a good enough variety to begin with. Whether he’ll have a mix of mainstream and indie media, we can’t tell for now, but I have a feeling we’ll be seeing a lot of him very soon. And that’s not because I learned he seems to have asked advice from one Murakami Nijiro in the past.