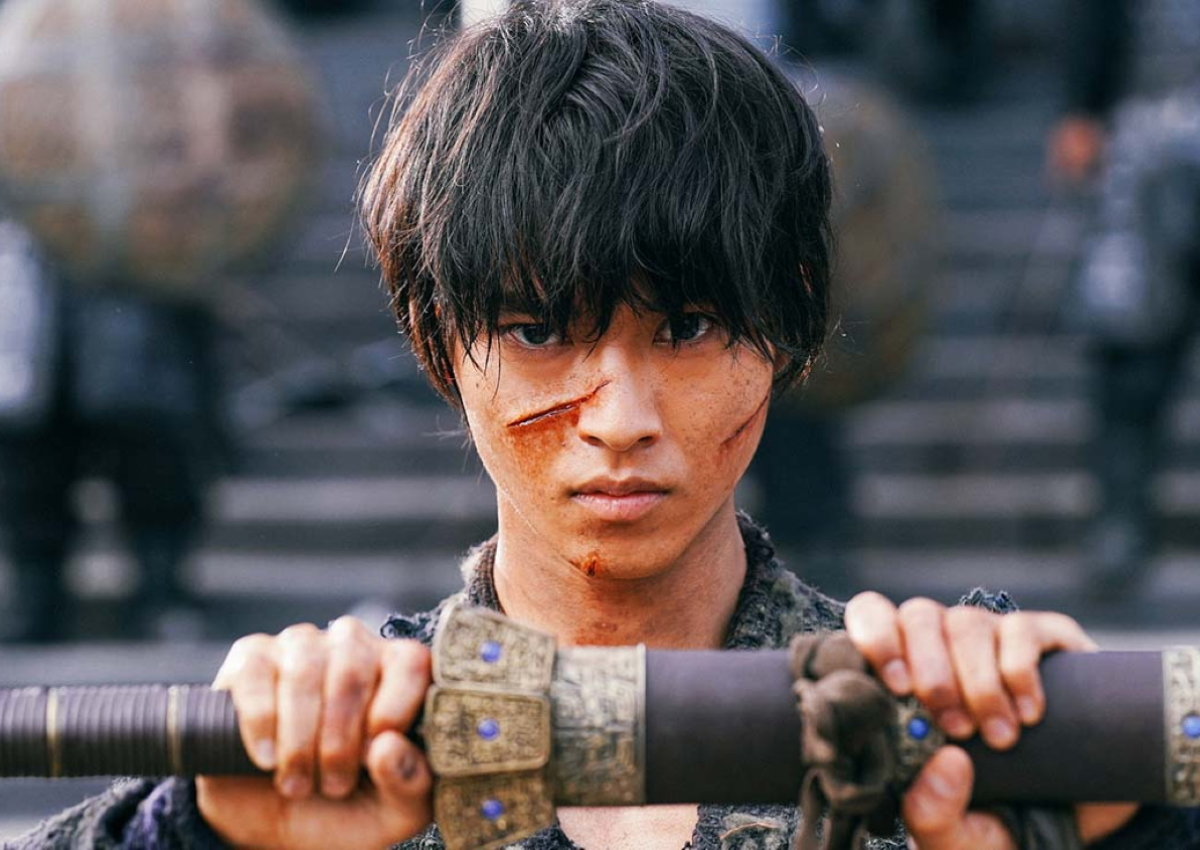 Back in 2016 Hara Yasuhisa’s Kingdom sent a shockwave through the live action adaptation scene with the release of a 3 minute LA short to commemorate the further release of the manga series. Starring as lead character Shin was Yamazaki Kento, at the time mainly known for his shoujo LA rush.

I remember people being divided. Not because of the 3 minute short – no, that one looked pretty amazing – but at the idea that an actual Kingdom LA adaptation might be in the works. On one hand, there were those interested enough after having watched the short, saying they wouldn’t mind if it was done with the same detail and seriousness, while on the other side there was the skepticism towards a possible cast and proper production. Would they take Kento again? Would they find someone else? Who would be directing? The rumor mill continued its work for months, picking up all slight pieces of possible confirmation, with news of a whole crew of actors – including Yamazaki Kento – heading to China for the filming of a mystery project topping it off.

Confirmation of the project’s existence didn’t come till April 2018 with the full cast revealed in October of the same year. Yamazaki Kento and the same-aged Yoshizawa Ryo would be starring as Shin and Hyou/Eisei respectively. Hashimoto Kanna took on Karyouten while Hongo Kanata was cast as Eisei’s cruel and ruthless younger brother Seikyou. The cast was completed with the likes of Nagasawa Masami, Mitsushima Shinnosuke, Takashima Masahiro, Kaname Jun, Osawa Takao, and Sakaguchi Tak, among others, in prominent roles.

And so the story goes…

Kingdom starts off with child slave Shin meeting Hyou, a boy seemingly around his age. Both of them dream of being free one day – to become great generals under the heavens – but know it won’t be easy. They grow together, learn to fight together, till the king’s closest vassal, Shoubunkun, spots them and realizes he can use the likeness of Hyou and Eisei, King of Qin, to keep the latter safe and sound. With no other possible way out, and a promise to fulfill their dreams of a greater purpose, Hyou agrees and joins Shoubunkun, leaving Shin by himself again. It isn’t till a heavily wounded Hyou finds his way back to Shin what seems to be months later that the story truly kicks in, and Shin’s quest for revenge is a go. 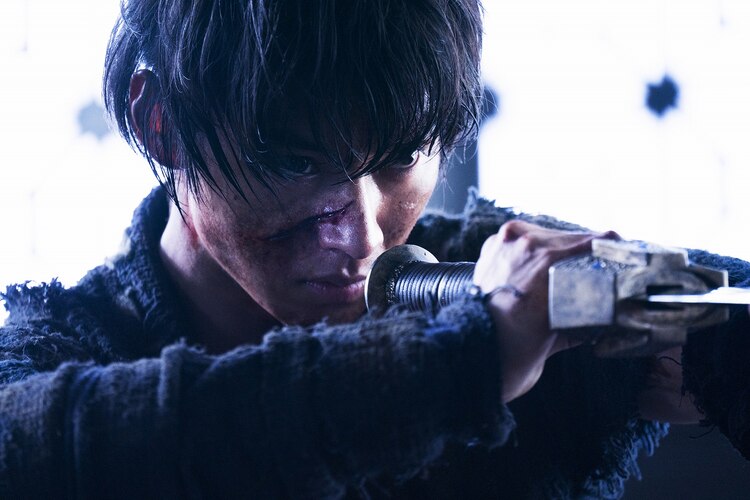 Throughout the movie, Shin mainly feels like your next best battle shounen lead. Not the brightest, doesn’t think twice, but clearly moves on his honest emotions. Adding to this, the fact none of the characters’ ages are mentioned at all works in their favor as well. Having no restraints on that end, Kento portrays Shin as a young honest warrior moving forward for the people he cares for, all the while going along with the flow of the others around him, never once adhering to formalities. The character actually agreeing and letting it know he has no idea what’s going on 95% of the times – “3,030 vs 80,000.” “In other words, which one is more?” – even creates somewhat of a fresh wind the others gladly pick up on, explaining him things as they continue to try and reach their goals. Kento manages to maintain the same feeling throughout the whole film, never really going overboard when it comes to his character’s being. What you see is what you get, and luckily enough the dumb and honest setting doesn’t get bothersome but instead livens up scenes which could easily have become stale otherwise. He even had a Yankee Suda moment at some point, or was that just me?

Is it Hyou, or is it really Eisei?

In the meantime, there’s also Hyou. Or Eisei. Well, both actually. Though Hyou doesn’t appear much in the movie as a whole, the difference Yoshizawa Ryo shows in his double role is easy to notice. The innocent and bright-eyed Hyou easily switches into the serious and colder Eisei, with the latter showing a more amused side the more Shin goes around being… well… Shin. It eventually reaches a peak when Eisei trusts Shin with taking over the throne room while the king of Qin himself keeps to the fight outside.

A specific thing to note might be that at the time Ryo was cast he wasn’t nearly as known as he is now. Either whoever decided on him figured he’d be worth giving a shot, or they anticipated his growth in the industry. Whatever it was, I’m sure it ended up bringing results in the end. Kingdom wasn’t just an LA with Yamazaki Kento in the lead anymore, but with Yoshizawa Ryo in a pretty much evenly important role. The two being close friends in their daily lives only added to their dynamics. Where Kento often has a tendency to let himself be caught behind an invisible barrier when it comes to his character confronting someone else, I failed to notice such a thing happening in Kingdom. Maybe he’s finally learned how to breach it – which would be a really great step in the guy’s growth as an actor – or maybe it was just because of having similar aged friends around in the main cast. In the end, the reason doesn’t even really matter. All that’s important is that he and Ryo both ended up incredibly fitting choices to bring their respective characters alive.

Straight from the manga pages

And talking about that last bit there’s one other portrayal I feel stood out: Hongo Kanata as the king’s younger half-brother Seikyou. It’s no surprise for Kanata to end up playing yet another cruel, evil side character in a live action – he has a bunch of those collected on his filmography after all – but it once again shows just why he keeps on being cast for those types. The hatred and disgust Seikyou feels towards people who are not of the same level in society as himself stands from the second he appears, and even though the guy doesn’t do much but sit on the throne and walk around the castle it’s enough for Kanata to easily make his presence clear. It gets scary, at times, how he does it with a flair that just feels almost too natural. It’s one of the reasons whenever his name ends up in a live action cast list I won’t even question anything anymore. I’m sure at least he’ll deliver.

And then there was general Ouki. Whether it was for his weird three part goatee or his peculiar way of speech I wouldn’t be able to tell you, but what I can say, however, is that Osawa Takao did a great job on giving the character weight without falling into a ridiculous version of himself while bringing the general from 2D to the big screen. It also piqued my interest for future installments. A character who can go with or against the main team depending on what fits him best is an interesting addition to a lead cast in my book.

Sakaguchi Tak, on the other hand, should have definitely received more screen time. His whole sequence made me think of Ayano Go in the first Rurouni Kenshin in a way. That focus on his fight along with a perceived, but not explored, depth of the character. Sadly both suffered from time restraints and were shifted into nothing but an in-between. At least it kicked Shin’s resolve into a higher gear.

But after all that I think it’s time to talk about the things Kingdom didn’t fully deliver on. When you take away the effort and skill of the cast as well as the amazing scenery throughout the whole movie, you are left with the scenes in-between and the filler in the back. While you’re supposed to be watching the fights in the front, some ridiculously choreographed – if even really choreographed – battle is happening in the corner behind it. I mean, it almost feels obvious that the only ones with proper thought out fight sequences are the likes of Shin, Eisei, and some of their closest allies while the rest just have to make do.

Similarly, when you’re paying attention to a discussion or dialogue by some import characters, the others are often just put in the scene to fill it up rather than serving any purpose or riding any flow. The problem isn’t with them being there, but with it being an obvious emptiness. A lack of weight.

I’m sure it happens a lot. There is simply not enough time (and money) to give everyone as much of a focus as they’d deserve. A single movie usually only lasts about two hours after all. But when it is so clear that nothing but the mains actually matter, it takes away from its immersion, and lets you see that they’re just putting on an act. As if a theater play is just caught on tape. Fights start to feel dumb, situations turn awkward, there is absolutely no pressure to the story whatsoever – you know it should be there but you can’t actually feel it – and you end up wondering how any of it even really connects. A team or army that’s feared for its power should be showing that power throughout, and not just drop to the floor at the sight of a sword or fight.

There are tricks to counter that feeling for sure – call it a movie’s magic, angles can do a lot for instance – but when they’re obviously just disregarded it makes you question the choices made. And that’s where we take a look at the movie’s director, Sato Shinsuke, and it all starts making sense. Sato has been attached to a bunch of LA projects through the years, with Inuyashiki and Bleach being the most recent ones before Kingdom, and in my opinion that emptiness has always been one of his biggest issues. Usually also one of his movies’ biggest flaws. As long as the fights focus on a certain few characters he’ll manage but bigger casts are obviously not his forte.

Maybe I have been spoiled with the likes of Rurouni Kenshin through the years, or maybe I just wished that the cast’s efforts and energy could have been shown better, knowing how long they’ve actually trained for their parts. All I know in the end is that if those multiple rumored sequels will actually happen, the growth better won’t be on the cast’s side only.

All in all Kingdom was a nice watch and definitely worth your time whether you’re a fan of any of the cast members or not.

K-Note: As a last addition I’d like to mention that one of Kingdom‘s nicest bits was – again – the amount of emotion Yamazaki Kento can put into certain scenes. His eyes, tears, and screams tell tales without him having to voice them. While the guy certainly still has his rough edges there’s not many who can do honest emotion as well and as thorough as he does, and whether or not he’s on your fave list or just a necessary evil in the J-ent business to you, at least that much should be clear by now.