Based on the manga series Museum: The Serial Killer Is Laughing in the Rain by Tomoe Ryosuke, it’s dir. Ohtomo Keishi’s turn to flex his ‘blood splatter’ muscles.

The movie centers on an unknown murderer who wears a frog mask and appears to be operating under stormy weather conditions.

Hunting this criminal is police inspector Sawamura Hisashi (Oguri Shun). By a mere piece of paper left on its first victim, Sawamura began to unravel the killer’s modus – to impose bizarre and cruel punishment. While victims appear to be random, a rookie detective (Nomura Shuhei) connected the dots, noting that they are members of a jury who convicted a man with the death penalty. The Frogman – thru his murders or ‘artwork’ – appears to be saying, they got the wrong guy.

One of the juries is Sawamura’s wife, Haruka (Ono Machiko), who is now missing along with their son. While Sawamura’s personal tragedy is laid out, the Frogman’s agenda of torture and murder parallels the detective’s struggles until both faces off to a bloody, albeit predictable conclusion. 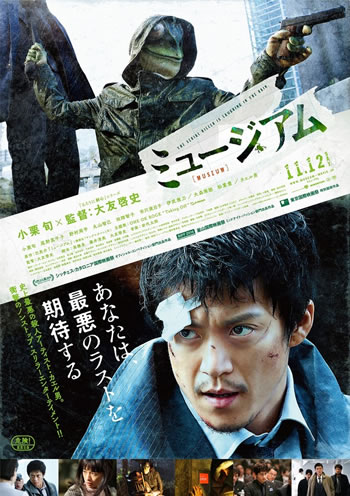 Certain elements were employed by dir. Keishi to make for a gripping watch – the grisly murders were carefully laid-out, showing an appropriate dose of graphic violence to suck in the audience. The music is eerie and sets the tone throughout the film.

The city filled with its soaking wet citizenry and slippery, narrow street alleys added to the oppressive mood.

It’s a tall order for Oguri. Sawamura is a lousy parent and husband, but an excellent investigator. It’s a balancing act to portray a character with conflicting persona yet Oguri delivers yet again. Flashbacks to Sawamura’s personal circumstances heightened the already intense situation with his work, making him a flawed yet genuine, breathing character.

Tsumabuki Satoshi plays the Frogman and is completely unrecognizable. There are plenty of serial killers before him, yet Tsumabuki shows a knack for the kind of theatrics reserved for psychopaths and offers a sublime and effective performance. “I’m an artist”, he said with relish. However, his personal circumstances are not explained properly, leaving questions unanswered.

What appears to be the consensus on serial killer films is that it either has a dynamite opening or a damn predictable ending. In most cases, the latter comes as a no surprise since previous films have already set the standard.

Dir. Keishi should be credited for attempting to come out with a decent alternative to films such as Seven, The Silence of The Lambs and even Perfume: The Story of a Murderer.

Museum is a thriller film that is character-driven with plenty of adrenaline-rush action scenes yet a bit too long for total and complete engagement.