Congratulations! I guess at a time like this that’s the first thing I should mention. Hongo Kanata is 25, and it should be celebrated. In one way or another. While we’re not in Japan – and I’m not so fond of stalking people for a living – a jump in the pool that is Hongo Kanata’s nearly 15 year career would probably be a better thing to do.

Gathering all little things, roles, and appearances, Kanata has starred in 56 acting-related projects from 2000 up until now. Is it possible to watch every single one of them? In a way, probably. That’s if you don’t mind going a little cross-media, and have a sense for research. Some things are easy: music videos, most dramas, movies. While he has a knack for appearing in shows which hardly ever get subbed, or can’t even be easily found somewhere, you’ll be able to catch whatever you’re looking for in the deepest corners of the internet anyway. But then there’s the stage plays, anime series, short movies, specials, the cameos, and a single web drama somewhere. As a long-time fan it’s started to feel like he’s been doing it on purpose. “Come find me if you can!” or something of the likes. But we manage, somehow.

Imagine Kanata. Now imagine him about 15 years younger. Most people know that the actor himself was recruited, then signed up for modeling by his mother when he was nothing but a toddler. For years he appeared in a variety of magazines and photo spreads around his hometown Sendai, before finally nabbing his first onscreen role in 2000, a music video for The Boom’s Lovibe. Fast forward another two years and the – then – child’s first real movie appearance was a fact. Returner stars Kaneshiro Takeshi and Suzuki Anne, among others, but if you pay a little attention Kanata’s not too hard to find.

Wait it out for another year and a chibi Kanata will show up as a crow hunter in 03+, a short movie in which he appeared alongside voice actress Sakamoto Maaya, as well as in Moon Child where he played the younger version of singer Gackt’s role. While the latter is neither his most known nor his actual debut role, it’s still one of those cult releases which will continuously be brought back to the surface, if only for VK stars Gackt and Hyde being in the starring roles.

But it doesn’t end there, however, as 2005 meant the start of a much bigger career. Fourteen by now, Kanata got the chance to appear in a few more challenging roles. Coincidentally also around the time where he said he’d actually started to enjoy acting. There was a movie named Fururi, and his supporting role in Until the Lights Come Back. But what became the major thing was nothing but his own first leading role as Iwamoto Satoru in Hinokio.

“I received my first lead role in the movie Hinokio, and that’s what decided it. Until then I would just do the things I got without thinking anything, but when you get the lead role you can’t do it with such a non-serious attitude. For the first time I understood how a single actor can influence an entire work greatly. And then, the more I thought about it, the more I realized it was difficult. But that’s why I thought I wanted to do it.” (Junon, 2008)

It was also that very same year Kanata appeared in the drama series Aikurushii. While it probably doesn’t ring a bell for most people, it is among fans generally known for being the starting point of a long lasting friendship between Kanata himself and fellow actor Kamiki Ryunosuke. Meeting at respectively 14 and barely 12 years old, the two actors have managed to keep their close friendship somewhat hidden, with only every now and then dropping some information. But this golden combi, as they have been called by some, has its fans in- and outside the industry. 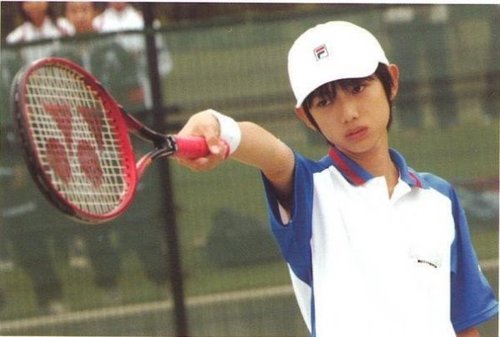 fter Aikurushii and Hinokio, Kanata continued to grab roles here and there, starring in a variety of dramas such as Memories of Matsuko, Seito Shokun!, and Himitsu no Hanazono, as well as a supporting role to Shida Mirai’s Seigi no Mikata in 2008. Aside from that, there’s the movies. And let those movies – maybe aside from a cameo in a Western production called Silk – be what put him on the radar for fans and the industry alike. The best example of that might be when he grabbed a tennis racket, a white cap, and a good dose of brattiness, to take on the role of the most troublesome sports-animanga lead child in history, Echizen Ryoma of Prince of Tennis fame.

“We had a great time filming Prince of Tennis because we attended training camps. Everyone had to cooperate to successfully come up with a good movie. At that time, I was able to improve myself due to a lot of experiences I had. It was the first turning point in my career as an actor.” (Zatoo Vol.3 2009)

A few months later – and after seemingly quite the growth spurt – he picked up Nana’s Shin where Matsuyama Kenichi left him at the end of the first instalment, and made him his own. Spiky grey wig and skinny plaid pants included. Don’t say I didn’t warn you!

“The other actors I had to work with starred in the previous movie, so I had to get used to them. During the first day of shooting I was at a loss of what to say, so I became worried. The director got mad at me and he said, ‘Have more fun with the other members.’” (Zatoo Vol.3 2009)

The now 17 year old Kanata then went on to be Akechi’s famed side-kick Kobayashi in another project based upon writer Ranpo’s works, meeting Kaneshiro Takeshi again onscreen for the first time in six years. While the role in itself might not have been an incredible challenge, it seems Kanata found it difficult to act the part of the boy who is lively and thinks positively, considering most of his past roles were characters who are rather calm and quiet and often moody.

He ended his last year in high school with Abe Hiroshi’s movie about bullying, Aoi Tori, as well as GOTH which was the live action adaptation of Otsu-ichi’s light novel of the same name. But then there was radio silence. While he had a cameo in the drama Reset, and took part in the yearly special Yonimo Kimyona Monogatari, he mainly focused on his transition from being a high schooler to a university student. It wasn’t until he was cast in WOWOW’s Tokyo23: Survival City during summer 2010, that he came out of his semi-hiatus.