Japanese food is something a bit mysterious and strange to me, but I have the chance to taste some Japanese cuisine of late that really made quite an impression.

When you watch Japanese movies, anime, and drama all the time, you get a sense of familiarity. But tasting authentic Japanese food is a totally different, but extremely fulfilling experience. What better way to eat udon noodles while watching your favorite Jdrama neh?

Through the years, there are many Japanese movies that focus on food – not necessarily sushi or tempura or noodles, but also cakes and pastries and delicacies and even the traditional tea ceremony. While this list is not exclusively about food movies, there are certain moments we find so awesome you just got to see it! Here are some scenes and screen captures showing delicious and delectable food on a number of favorite Japanese movies…

Of course, we have to start with the classic – Tampopo! This lovely light drama-comedy is a must for all food lovers. If you are wondering about how to make the perfect Japanese ramen, then this movie will tell you how and much more. It’s not only about preparing ramen that will make you love this movie. You’ll also love the heroine – Tampopo. A single Mom who struggles to perfect her ramen in order to support her kid and establish a ramen house. 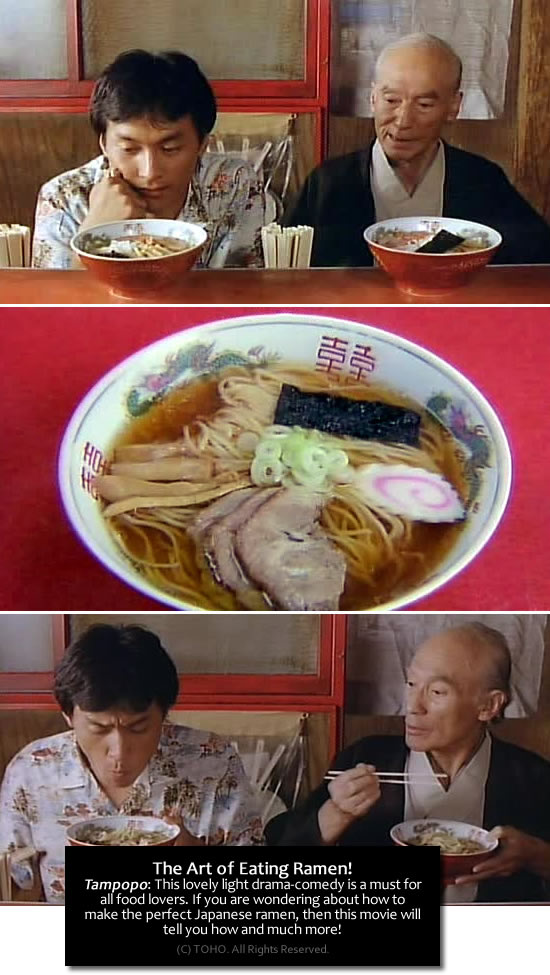 Billed as the first “ramen western,” the main plot concerns the friendship between Goro, a grizzled truck driver, and Tampopo, the widowed owner of a roadside stand selling ramen noodles. The story is their quest to search for the perfect ramen noodle for her stand. The movie is also interleaved with various short vignettes that concern food.

It may not sound like much, but it’s hilarious, charming, eccentric, and different. And it will make you hungry. [ source ]
There are scenes in the movie not directly related to Tampopo’s quest to make the perfect ramen – some businessmen ordering French cuisine and not knowing exactly what they are ordering, a dying wife and mother struggling to cook the last meal for her family, and expiring after doing so (very dramatic!) and many other comedic and playful scenes dealing with food. 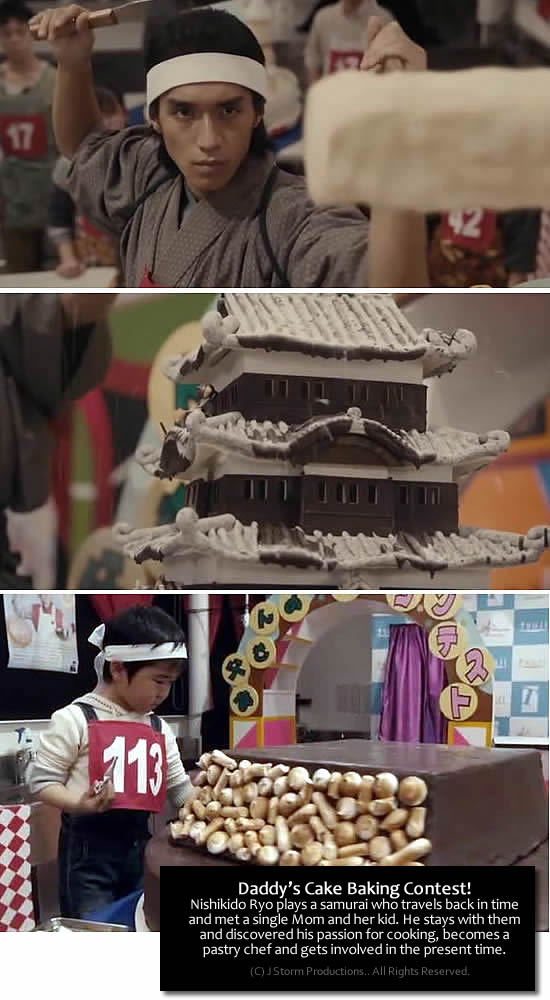 This is one of my favorite Japanese movies – A Boy and His Samurai (Chonmage Purin) – and it has a lot of unique qualities that make it such a memorable and enjoyable movie. First, Nishikido Ryo plays a Samurai who travels back in time due to an accident and met a single Mom and her kid. The story in itself is quite interesting because the interaction between the characters is both funny and dramatic in equal measure. Second, the scene featuring the Dad Cake Baking contest is adorable and touching. Third, Ryo gets to bake a cake and show a lot of awesome pastries! Cakes and pastries are big in Japan with decorations, colors, and motifs that are spectacular, with some even bizarre and out of this world. 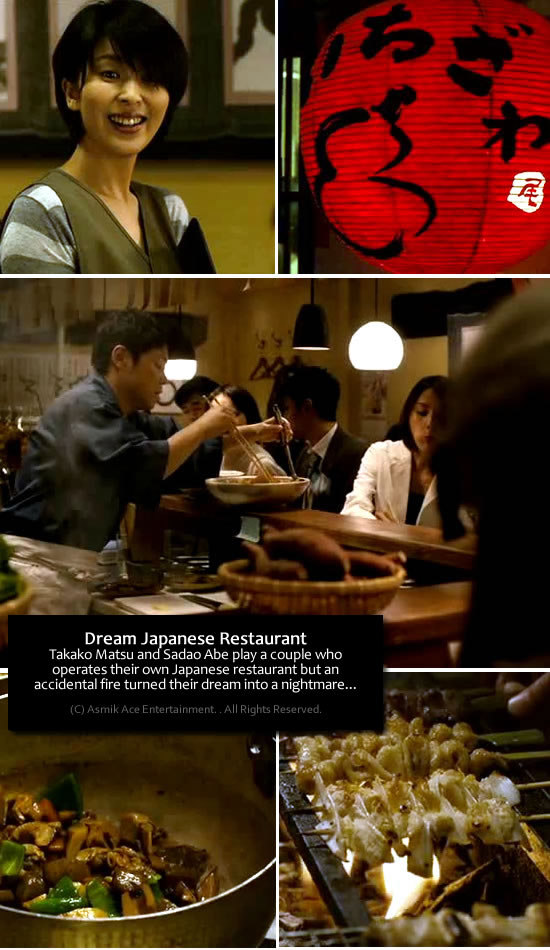 Dream For Sale, which is not exactly a movie about food, but features fascinating scenes involving the couple played by Takako Matsu and Sadao Abe who operate their own Japanese restaurant. Their hard work seems to be bearing fruits and the restaurant is getting more and more popular with customers. Unfortunately, an accidental fire put everything up in smoke and they have to start from zero. The delectable dishes they cook and prepare for their customers is such a terrific scene to watch. I feel hungry just thinking about it. You can see from the screenshot above some of the dishes. 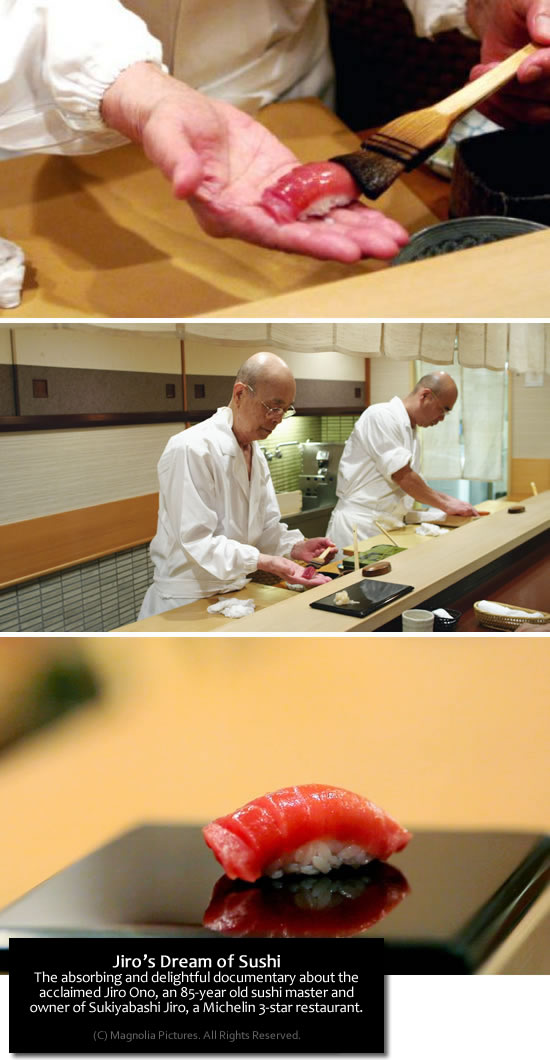 Jiro’s Dream of Sushi is an American documentary directed by David Gelb. The film follows Jiro Ono, an 85-year-old sushi master, and owner of Sukiyabashi Jiro, a Michelin three-star restaurant, on his continuing quest to perfect the art of sushi. The film also profiles Jiro’s two sons, both of whom are sushi chefs. The younger son, Takashi, left Sukiyabashi Jiro to open a mirror image of his father’s restaurant in Roppongi Hills. The 50-year-old elder son, Yoshikazu, obligated to succeed his father, still works for Jiro and is faced with the prospect of one day taking over the flagship restaurant. 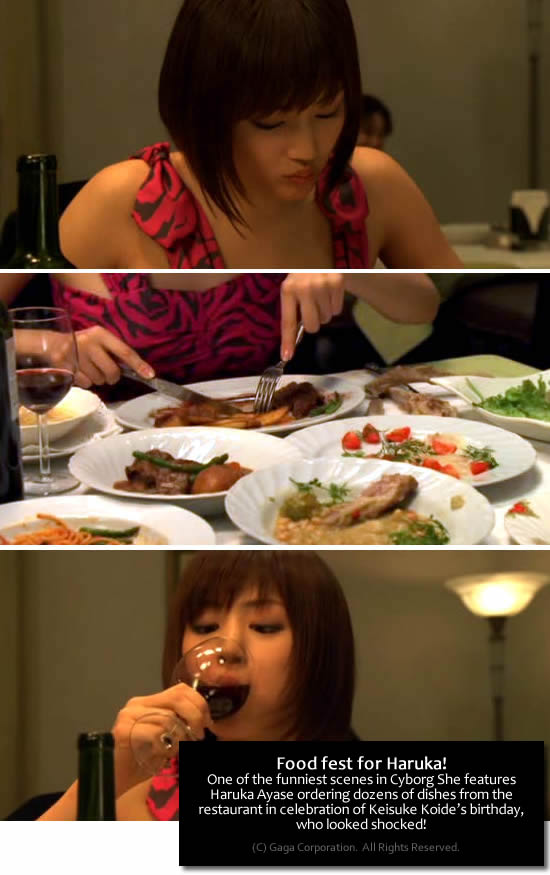 Haruka Ayase’s most popular movie Cyborg She is a delightful movie to watch. Aside from the amazing on-screen chemistry between Ayase and her co-star Keisuke Koide, Haruka gets to eat delicious food and not pay for it! 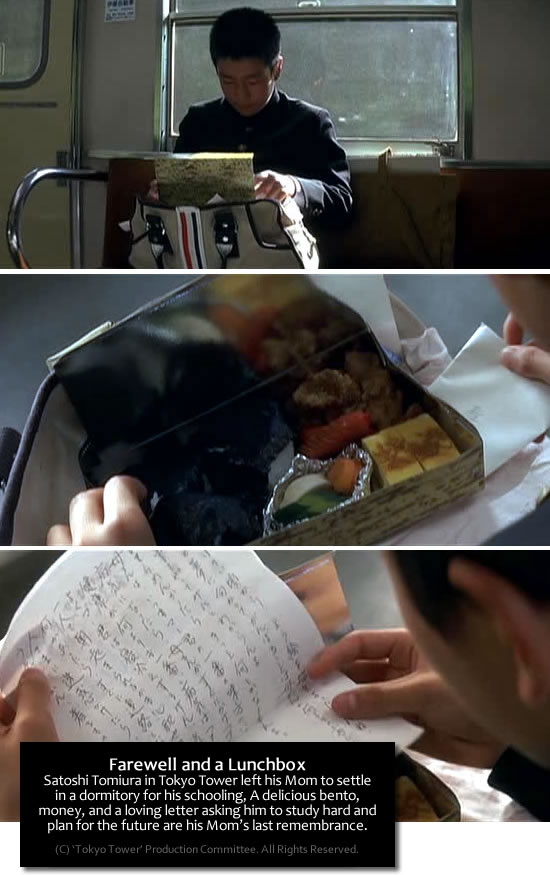 Tokyo Tower, which is top-billed by Joe Odarigi and Kirin Kiki, is all about a dedicated mother who will do everything for her son. In one of the most poignant scenes, Masaya (Satoshi Tomiura, played by Joe Odagiri later) gets into a train to start school – far away from his Mom. As always she gave him a lunchbox filled with delicious food, some money for his allowance and a moving letter that tells the son to plan for his future. You see, Masaya’s Mom operates a restaurant and her earnings were used to finance his schooling. Up until College, Masaya takes from his Mom everything that he needs. When his Mom was stricken with cancer, the tables were turned and he dedicated his time and affection for her. 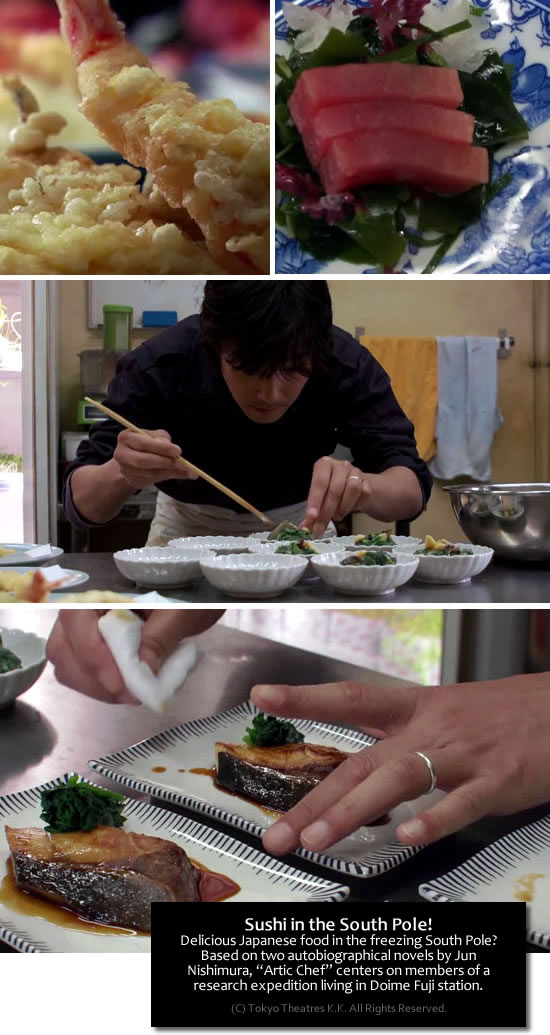 The Antarctic Chef (Omoshiro Nankyoku Ryurinin) is more than an adventure movie as we follow the difficult lives of Japanese men who are part of an expedition to the South Pole. In an environment where the average temperature is negative 54 degrees Celsius and is situated 3800 meters above sea level, food can be a challenge to prepare and cook, as well as other daily necessities. However, the cook, Nishimura (Masato Sakai) manages to cook extravagant meals consisting of high-class ingredients like foie gras, spiny lobster, and Matsuzaka beef and was up to the challenge. 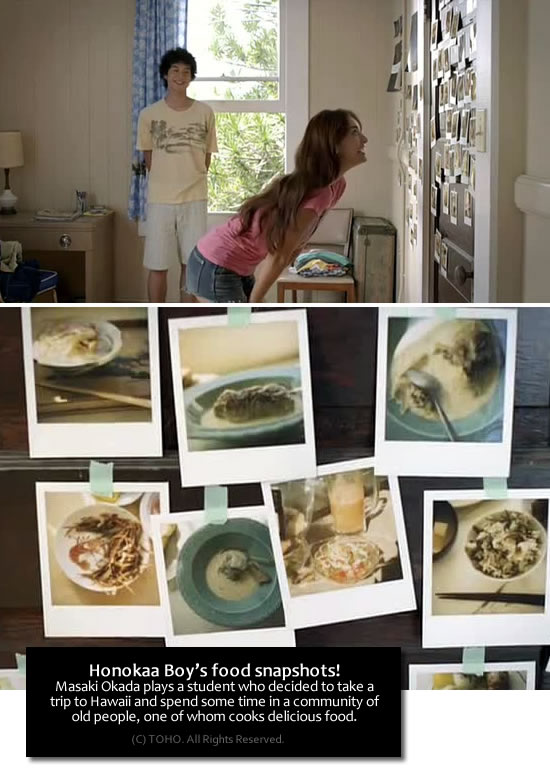 A much older woman took an interest in a young student from Japan as he temporarily resides in Hawaii. Honokaa Boy (Honokaaboi) tells the story of Leo (Masaki Okada) and his relationship with Bee (Chieko Baisho) who became infatuated with him. Bee is also a famous cook in the island who has prepared some delicious and exotic dishes for everyone. 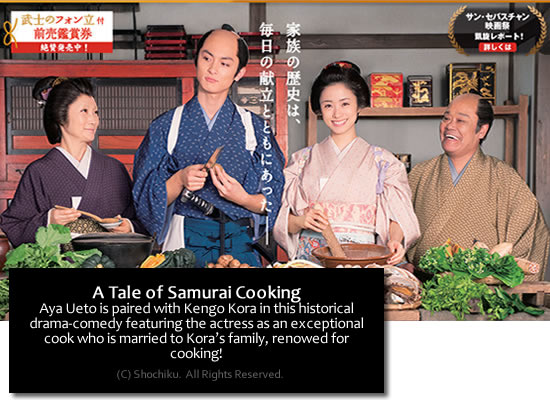 There are two particular movies I am very excited about and both of them deal with food, well one of the movies is all about cooking.

A Tale of Samurai Cooking (Bushi no Kondate) starring Kengo Kora and Aya Ueto is a movie I really am looking forward to watching. It’s all about the relationship between a great cook Oharu (Ueto) who is to marry into a family of famous chefs. Her future husband Yasunobu (Kengo Kora) is not really interested in cooking (actually, he’s a terrible cook!) but is the family’s heir. In order to save their reputation, Oharu begins teaching her husband how to cook properly and make delicious food.

This next movie is very interesting because it tells the story of the famous Japanese who revolutionize the tea ceremony in Japan. Ask This of Rikyu (Rikyu ni Tazuneyo)

Notes: Photos of food used in this article are for illustrative purposes only. The photo of the Tampopo restaurant is not exactly the same as in the movie but is used for visual impact only.